FLAME
X
Put text, tables or any other HTML contents here, as you would put in any other HTML page. ..... and more.
Skip to content
Home » New opportunity opens for the Palestinians: Will they seize peace and prosperity . . . or let it slip away again?
What the Ramallah lynchings taught us about Palestinian incitementJacques Gautreaux2020-10-12T10:45:37-07:00 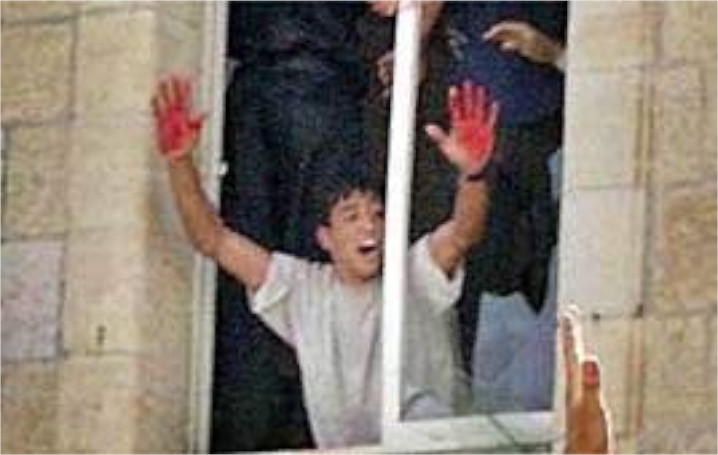 Twenty years ago, Palestinian Aziz Salha waved his bloody hands from a police station where he helped torture, mutilate and murder two Israel Defense Force soldiers. Though Salha was later tried and jailed, he was released in a prisoner swap and now collects a lifetime PLO pension.

What the Ramallah lynchings taught us about Palestinian incitement

While in the custody of Palestinian Authority policemen, they were viciously stabbed and beaten to death, their bodies subsequently mutilated and dragged through the streets of Ramallah. These were images broadcast live around the world and seared into the minds of those who sadly witnessed them.

The most visceral image from that day was that of Aziz Salha, one of the lynchers, who proudly waved his blood-stained hands from the police station window.

This bestial murder, and the ghastly images surrounding it, have haunted a generation of Israelis who had supported the Oslo peace accords and witnessed only a few months previously then-Prime Minister Ehud Barak offer the Palestinian leadership a state with Jerusalem as its capital and control over the Temple Mount. The Palestinians rejected this offer out of hand, like all before and since.

Since that moment, many Israelis understood that to perpetrate such a murder, and delight in it as thousands of onlookers did, flatly contradicted their belief that the Palestinian people truly wanted peace.

Unfortunately, the Palestinian policies of incitement and delegitimization that inspired the Ramallah lynchings continue to this day. Unfortunately, too, these hateful policies go virtually unreported by U.S. and European mainstream media.

Yet the type of hate and loathing that creates such inexplicable rage, bloodshed and murder continues intentionally and purposefully in daily Palestinian life.

Israelis, and even Jews generally, are continually seen as legitimate targets in the Palestinian education system, in the media and in religious institutions.

According to Palestinian Media Watch, the Palestinian Authority regularly teaches that Jews are Satan’s partner, spreading evil in the world. That evil is allegedly inherent in Jewish genes, and the killing of Jews is Allah’s will. The extermination of Jews, they assert, is necessary so all of humanity can live in peace.

In 2016, in honor of Ramadan, PA TV broadcast a cartoon series for young children that presented Jews as the representatives of several devils, fighting battles for these devils, and doing their work on earth. “This is a conflict between two entities, good and evil, between two projects: Allah’s project vs. Satan’s project,” the narrator explained to the watching children.

Furthermore, Jews are dehumanized and turned into animals that need to be culled. Frequently, Jews have been referred to as the descendants of pigs and monkeys, or vermin, monsters and sub-human, similar to propaganda used by the Nazis before and during the Holocaust. In 2014, a young boy recited on TV a poem about Jews, including the following: “Oh most evil among creations\ O barbaric monkeys, wretched pigs.”

Palestinians are regularly told that the murder of Israelis and Jews is a holy mission. Recently, former terrorist Shifa Al-‎Qudsi spoke about how during the Second Intifada she took on a suicide mission dressed as a pregnant woman intending to detonate a bomb, killing herself and multiple innocent bystanders. Thankfully, she was caught and unable to complete her mission. In ‎an interview on Israeli TV last month, Al-Qudsi remembered how she felt joyous while ‎preparing to murder Israelis: “Like a bride on her wedding day, who is preparing to go to ‎her groom.”‎

From a very young age, Palestinian children are taught to hate Israelis and Jews, and to sacrifice their lives to murder them. On a PA TV show for kids, O Children of Our Neighborhood, home videos are shown of very young kids addressing terrorists as “heroic prisoners .” Holding a framed poster of terrorist Anas Allan, who is serving four life sentences for his involvement in the murder of four Israelis, two girls likened the imprisoned terrorists to “tall mountains” and “lions.” A young boy specifically mentioned murderer Allan, sending “love” to all prisoners.

The incitement against Israel, Jews and the glorification of murder is all pervasive in Palestinian society. Street signs and city squares, sporting tournaments and summer camps are named after terrorists. Their beaming posters promising “paradise” to all those who follow in their footsteps, and even answers in crossword puzzles mean that the average Palestinian is constantly bombarded with crude, daily messages that the murder of Jews, innocent or not, is a desirable, even heroic act.

Unfortunately, Israeli concessions and compromises in response to Palestinian demands have not reduced the blood lust. Even the infamous bloody-handed Aziz Salha, who was arrested by Israel and sentenced to life imprisonment, was released in 2011 as part of the exchange for IDF soldier Gilad Shalit, who had been held prisoner. Salha now receives a generous monthly stipend from the Palestinian Authority in tribute for his murderous actions.

While the international community continues aiding Palestinian institutions that are involved in this incitement and dehumanization, it and many media outlets consider issues like settlements, territory and Jerusalem the main obstacles to peace. Nevertheless, even if an agreement between Israel and the Palestinians were signed, the hatred instilled in generations under the Palestinian Authority would remain, virtually ensuring there would be no peace or cessation of bloodshed.

I hope you will point out to friends, family, colleagues and your elected representatives that to achieve real peace, security and an end to the conflict—good for all the peoples of the region—the international community and mainstream media must ensure that the Palestinian Authority ends its daily campaign of incitement and dehumanization.

Only when this is achieved and the horrifying images of Israelis being butchered recedes further into history—replaced with a Palestinian society that no longer sees Israelis and Jews as the sub-human enemy of humanity—can peace be attainable. That is why incitement remains the greatest obstacle to peace and must be remedied as a primary criterion for negotiations.