FLAME
X
Put text, tables or any other HTML contents here, as you would put in any other HTML page. ..... and more.
Skip to content
Home » Despite vicious attacks on Israel by the media, the U.N. and Islamists, we continue to win!
U.S. Aid to Lebanon Is Aid to Hezbollah Terrorists—Time to Stop ItJacques Gautreaux2020-05-11T11:42:21-07:00 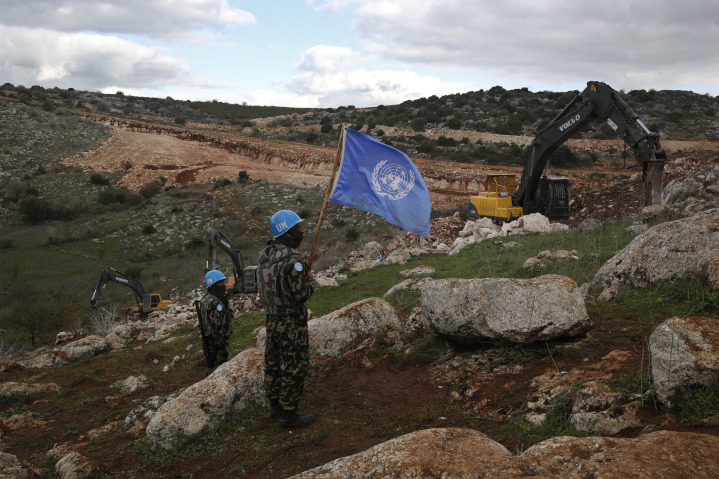 U.S. Aid to Lebanon Funds Hezbollah Terrorists—Time to Stop It

While the U.S.-designated terror group Hezbollah has denied any direct connection to the government of Lebanon, that flimsy charade is about to end if a group of U.S. lawmakers gets its way.

Likewise, while the 2006 U.N Security Council Resolution 1701 creates “a buffer zone free of ‘any armed personnel’” in southern Lebanon—and since Hezbollah now has more than a hundred thousand missiles aimed at Israel, stored in the southern part of Lebanon—that travesty should also end if Israel and the U.S. get their way.

In short, it’s time for world powers to increase sanctions on Hezbollah and any entities that do business with the group—starting with the United States and the European Union, both of which financially support the Lebanese government . . . and thus indirectly fund the terrorists of Hezbollah.

Here are some astonishing facts about the relationship of Shi’ite Hezbollah to Lebanon:

• Hezbollah maintains a huge standing army (a so-called militia) of some 40,000 men under arms in Lebanon.

• Hezbollah has created an arsenal of 130,000-150,000 rockets, mostly concentrated near Lebanon’s southern border with Israel.

• Iran is Hezbollah’s largest financial and strategic benefactor by far, qualifying the Lebanese group as a veritable arm of the Islamic Republic.

Bear in mind that the United Nations maintains an international peacekeeping force of about 9,400 ground troops and 850 naval personnel to enforce U.N. strictures—at an annual cost of $474 million.

Since Hezbollah operates freely in southern Lebanon and prevents UNIFIL access to broad swaths of Lebanese territory, it’s clear that UNIFIL is not only useless, it’s a huge waste of money.

No wonder Israel’s Ambassador to the U.N., Danny Danon, is demanding that UNIFIL stop playing games and do its job—which is to keep the U.N.-designated buffer zone free of weapons and armed forces. For starters, Danon is calling for “full freedom of movement” for the peacekeeping force. His efforts are supported by U.S. Ambassador to the U.N., Kelly Craft.

U.N. Secretary-General Antonio Guterres issued a report recently saying the both Lebanese and non-Lebanese militias continue to operate outside of Lebanese governmental control in violation of a 2004 U.N. resolution prohibiting such activity.

Guterres, who obviously has no power in these matters, said he continues to urge the Lebanese government and the LAF “to take all measures necessary to prohibit Hezbollah and other armed groups from acquiring weapons and building paramilitary capacity outside the authority of the state.”

How about ordering UNIFIL to fulfill its responsibilities, Mr. Guterres?

Note also that the United States has dumped more than $1.82 billion in “security assistance” into the LAF in the last ten years. The U.S. currently gives Lebanon about $224 million a year in combined Department of State and Department of Defense military grants.

No wonder, too, that a group of four U.S. Representatives has sent a letter to U.S. Secretary of State Mike Pompeo demanding that the U.S. re-evaluate and suspend security assistance to the state of Lebanon.

In their letter, the Congress members note that Hezbollah and the LAF “are no longer separate entities.” This fact establishes the logical conclusion that “by continuing to provide this assistance we are contravening U.S. law by funding a terrorist organization .”

Germany delivered a major bit of good news last week, by banning activities of Hezbollah in its territory. Germany’s Supreme Court ruled that Hezbollah is an organization that “disrupted global peace. ”

Germany’s move shatters a long-held distinction among European nations, which against all evidence hold that Hezbollah’s military wing is a terrorist group, while its political wing is not, and is therefore permitted. Even Hezbollah denies that its two divisions are separate entities, but the E.U. so far clings to its excuse in order to maintain friendly relations with the terrorists.

Clearly it’s time for the U.S. State Department and Department of Defense to cut their ties—and funding—to the Lebanese government and the terrorists embedded in it. We should also put pressure on the U.N. to force UNIFIL to fulfill its mission . . . or disband (or defund) it completely. Obviously, U.S. taxpayer dollars sent to Lebanon are either directly or indirectly aiding Hezbollah.

Hezbollah’s toxic influence in Lebanon—and increasingly in Syria—is only growing. The U.S. administration should show leadership on this issue, as it has in cutting funding to Iran and other Middle East entities that work contrary to U.S. interests.

We can hope that Germany’s lead, followed by additional sanctions enacted by the U.S., might even bring E.U. nations to their senses, so that they, too, begin isolating Lebanon for its embrace of Iranian proxies.

I hope that as you discuss the U.S. relationship to Lebanon—and our quarter-billion-dollar contribution to its military—you’ll emphasize that every dollar we taxpayers send to Lebanon supports Hezbollah terrorists, Iranian imperialism, and military threats to Israel.