FLAME
X
Put text, tables or any other HTML contents here, as you would put in any other HTML page. ..... and more.
Skip to content
Home » Despite vicious attacks on Israel by the media, the U.N. and Islamists, we continue to win!
U.S. aid to Lebanon helps Hezbollah create an Iranian puppet stateJacques Gautreaux2020-09-06T22:27:20-07:00 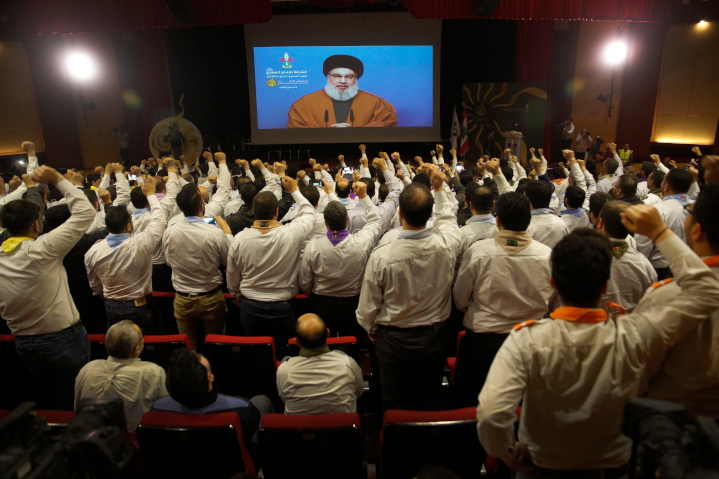 Hezbollah scouts in Lebanon cheer their leader Sayed Hassan Nasrallah on video feed, as he berates the United States for increasing sanctions on Iran, which funds the militant terrorist group and supervises its increasingly powerful grip on the Lebanese government.

The massive explosion that rocked Beirut on August 4th not only inflicted warlike damage in Lebanon’s capital city, it also exposed a subversive force hidden to most Westerners that increases its control of the country daily.

The detonation of 3,000 tons of ammonium nitrate killed nearly 200 people, injured thousands, and devastated Beirut’s port. Perhaps the only good to come of the accident is its highlighting of Hezbollah’s insidious role in Lebanon.

Many in Lebanon and around the world accused Hezbollah—considered a terrorist organization by the U.S., Europe and in the Arab world—of owning the ammonium nitrate. This possibility is the more ominous since Hezbollah also operates as an unofficial state within a state, holding a vice-like grip on the Lebanese government, where it commands a veto on government policies and appointments.

Hezbollah’s power and activities are indicative of much that is wrong in the region, especially as a vital part of Iran’s arc of influence throughout the Near and Middle East. Unfortunately, the U.S. and European nations have continued to enable Hezbollah by supporting the facade of an independent Lebanese government, and have contributed billions of dollars of aid and assistance to it.

Hezbollah was founded, funded and ideologically inspired by the Islamic Republic of Iran. While Hezbollah opposed Israel’s military initiative in Lebanon’s south to bring protection for Israeli citizens in the north, it was a full partner to the Syrian occupation of eastern Lebanon. Syria’s brutal occupation of Lebanon only ended when former Prime Minister Rafik Hariri, widely considered to be the main architect of the end of the Lebanese Civil War, was assassinated. Hezbollah members were recently found guilty of the murder by a United Nations tribunal.

Hezbollah has built up a mighty military that is far superior to the Lebanese army. It has an arsenal of weapons equal to a medium-size army and is generally considered the most powerful non-state actor in the world. The group is estimated to have 25,000 full-time fighters and perhaps 20,000–30,000 reservists.

They reportedly have at a conservative estimate around 14,000 precision rockets, which have a range of up to 200 kilometers, and between 100,000 and 150,000 non-precision rockets. This is without Hezbollah’s longer-range missiles, which can pretty much cover every inch of territory in Israel, something Hezbollah leader Hassan Nasrallah has regularly boasted about. Their army is financed by Iran and trained by Iran’s Islamic Revolutionary Guard Corps. Hezbollah’s military budget runs about one billion dollars per year.

Hezbollah has committed terrorist attacks all over the world, including in Latin America—where it bombed a Jewish community center in Buenos Aires killing 85 in 1994—in Europe and the wider Middle East. It is held directly responsible for the murder of 241 American servicemen in Beirut in 1983, the deadliest attack against U.S. Marines since the battle over Iwo Jima in 1945.

Hezbollah also maintains a social services wing, private school system, and its own TV and radio channels, whose primary aim is propaganda and indoctrination. This is to serve Hezbollah’s ultimate agenda of turning Lebanon—whose now bombed-out capital used to be known as “The Paris of the East”—into a brutal and extremist Shiite state modeled on the Islamic Republic of Iran.

With Near and Middle East politics now being split into a moderate wing, headed by pragmatic Sunni states, plus Israel, and an extremist wing, including Qatar and Syria, led by Iran, Hezbollah plays a major role in destabilization across the region. The group has been condemned and designated as a terrorist organization by both the Arab League and the Gulf Cooperation Council, for leading efforts to destabilize nations like Egypt, Bahrain and Saudi Arabia.

Hezbollah has also been involved in countless atrocities in Syria in the service of Iranian interests in propping up the Bashar Assad regime and responsible for hundreds of thousands of deaths since the conflict began in 2011. Hezbollah has been described as a crucial ally in allowing the Syrian regime and its Iranian backers to brutally quell any opposition in the country through its fighters in Syria.

With the help of Hezbollah, Lebanon has effectively become an Iranian colony. As Mordechai Kedar of the Begin-Sadat Center for Strategic Studies wrote last year, “Lebanon has not existed for quite some time. The country’s agenda is dictated by Tehran, and its military and economy are designed to serve the needs of Hezbollah . . . The Lebanese parliament, government, president and all other state institutions are nothing more than a façade.”

Ironically, with all this, Lebanon still receives billions of dollars in aid and assistance from the international community, much of it earmarked for the Lebanese Armed Forces, which is generally considered subservient to Hezbollah’s agenda. Since 2006, the United States has provided over $1.7 billion to the Lebanese Armed Forces (LAF), even though that military has never lifted a finger to disarm or neutralize Hezbollah.

According to the U.S. government, this aid is provided specifically to “enable the United States to mitigate Iranian, Hizballah, and Sunni extremist threats and influence in the country. U.S. foreign assistance will build the capacity of the Lebanese Armed Forces (LAF) and the Internal Security Forces (ISF) to secure Lebanon’s borders and disrupt and mitigate violent extremism.”

Nonetheless, it has now become almost impossible to differentiate Hezbollah from Lebanon, and any aid or assistance given to the Lebanese Republic merely contributes to the growth and power of the Shiite terrorist organization and its destabilizing and bloody influence in the region and globally.

At a minimum, nations that seek to help Lebanon should make their assistance dependent on disarming Hezbollah and ending its military and political presence, something demanded by United Nations resolutions, including UN Security Council Resolution 1701.

I hope you will point out to friends, family, colleagues and your elected representatives that now is the time for the international community to end one of the region’s greatest threats to security and stability . The U.S. should use its economic and diplomatic clout to pressure Lebanese authorities to establish their sovereignty over all of its territory and put an end to the perverse role of Hezbollah as a state within a state.