FLAME
X
Put text, tables or any other HTML contents here, as you would put in any other HTML page. ..... and more.
Skip to content
Home » New opportunity opens for the Palestinians: Will they seize peace and prosperity . . . or let it slip away again?
Time to crack down on Erdogan’s TurkeyJacques Gautreaux2020-10-19T09:52:19-07:00 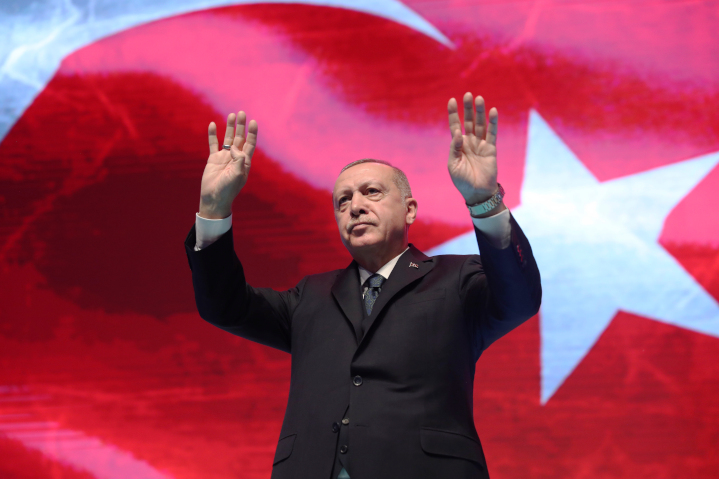 Turkish strongman President Recep Tayyip Erdogan is de-democratizing Turkey and pursued an Islamist strategy at home and abroad, particularly in Syria and Libya, and he cultivates relations with Hamas and the Palestinian Authority—all contrary to U.S., European and NATO interests.

Time to crack down on Erdogan’s Turkey, now more an opponent than an ally

The Republic of Turkey used to be known as a bridge between East and West, a shining example of a Muslim-majority liberal democracy. It is a member of NATO, was considered a candidate for European Union ascension and an important partner because of its geostrategic location.

However, since the election of Recep Tayyip Erdogan as Prime Minister in 2003, Turkey has abandoned its secular democratic underpinnings and is now seen less as a solution in the region than one of its most threatening problems, along with Iran.

The U.S., the EU and the West in general have been extremely patient with Erdogan’s Turkey, despite its purging of the judiciary, media and military, long considered reliable barriers against creeping Islamism.

Nevertheless, Turkey’s recent actions demonstrate that it is no longer a friend or an ally but is pursuing what a former senior member of Erdogan’s inner circle called “Neo-Ottomanism”—a return to its imperial and regional ambitions. These moves are sufficiently contrary to U.S. and Western security interests that it’s time to call Turkey to account.

Turkey’s political closeness to Russia is a major worry for NATO. Its decision to take delivery of the next generation Russian S-400 missile-defense systems is considered a slap in the face of NATO, especially when Western systems were on offer. Many warned against the purchase, saying the systems could gravely compromise NATO defenses by giving Russian technicians access to vital information on the latest American and European fighter aircraft.

Moreover, Turkey has pursued what Cyprus, a European Union member, called “illegal expansionist plans” in the east Mediterranean by continually attempting to drill for gas in waters where Cyprus has exclusive economic rights. On many occasions, these exploration vessels were accompanied by warships. Experts have called these activities “acts of piracy” and contrary to international law.

Despite long illegally occupying the northern part of Cyprus and violently oppressing its own Kurdish population, Turkey has become increasingly involved in the Syrian civil war in recent years. It has long provided military and diplomatic support for Al-Qaeda affiliate the Nusra Front, which has caused untold atrocities and considered a terrorist organization by many across the world. While ostensibly claiming it was conducting operations against the ISIS, the Turkish military has repeatedly entered and shelled parts of Syria controlled by Kurds, who fought against Syria’s Bashar Assad alongside Western forces. One U.S. Senator on the Senate Armed Services Committee said last year that the Turkish offensive against Kurds in northern Syria is “on the cusp of genocide.”

Erdogan has increasingly become open about his relations with terrorist organizations. He recently and publicly met with Hamas’ leader Ismail Haniyeh and deputy leader Saleh al-Arouri, both of whom have a $5 million bounty on their heads after being designated as terrorists by the U.S. “President Erdogan’s continued outreach to this terrorist organization only serves to isolate Turkey from the international community, harms the interests of the Palestinian people, and undercuts global efforts to prevent terrorist attacks launched from Gaza,” the U.S. State Department said in a statement. This comes on the heels of reports that some of the 12 senior Hamas members who are located in Turkey had received Turkish citizenship.

In July, Erdogan formally converted Istanbul’s sixth-century iconic Orthodox Christian cathedral Hagia Sophia into a mosque and declared the UNESCO world heritage site open to Muslim worship, hours after a high court annulled a 1934 decision that had turned it into a museum. This despite repeated calls from international officials and Christian leaders not to take this controversial and explosive step.

One of the most glaring examples of Turkey’s about face to the West and its interests is in its rapidly deteriorating relationship with Israel, which used to be considered an axle of stability and security in the Eastern Mediterranean.

Over the years, Erdogan and his supporters have engaged in anti-Semitic incitement, directly supported the IHH, a terrorist organization responsible for the violent flotillas to Gaza and has attacked Israel in international forums. He has been branded an anti-Semite not infrequently by Israeli officials and organizations like the Simon Wiesenthal Center. Erdogan recently claimed that Jerusalem “is our city” and said that the conversion of Hagia Sophia into a mosque is a first step into “liberating” the Temple Mount, Judaism’s holiest site.

These are just some of many examples of Turkey’s turn away from the West, and its place as a pillar of stability and security in the region. Some, like former President Barack Obama, believed Erdogan was a loyal partner, regarding him as “a man of principle, and also a man of action.” However, even Obama was disillusioned with him by the end of his presidential tenure.

However, few have attempted to exert pressure on Turkey to change direction. They have been worried that by pushing too hard, they will completely lose and alienate it. They are also worried about Turkey’s threat to allow for more Middle Eastern refugees to use it as a transit nation to gain access illegally to the EU. This is a hollow threat, because it has barely acted on this issue up until now, and if anything continues to allow access in the other direction, allowing terrorist sympathizers from Europe to use it as an access point to join with terrorist groups in Syria and Iraq.

Nevertheless, in recent years, Erdogan’s Turkey has completely recalibrated its position vis-à-vis the West, and even if its former partners in the region.

Thus, it is incumbent on the U.S., members of NATO and other interested nations to exert pressure economically, geostrategically and diplomatically to convince Erdogan that he has more to lose than gain from his behavior. They must show that they will not be bowed by threats from Turkey and its role in conflicts, such as in Libya, to gain leverage.

Turkey is vulnerable because of its dire economic situation. The EU buys more than half of Turkey’s exports and owns more than two-thirds of its foreign direct investment. Late last year, President Donald Trump signed an executive order sanctioning Turkish officials, hiking tariffs on Turkish steel up to 50% and “immediately” halting trade negotiations with the country. It now dangles the possibility of a free trade deal with Turkey.

Turkey’s allies, Russia, China and Iran, simple cannot compete with this reality, and Erdogan knows it.

Please point out to your friends, family, colleagues, newspaper editors and elected representatives that the EU and the U.S. must condition their assistance, trade and alliance on Turkey’s changing its behavior. It has largely only seen the carrot—if it continues its misdeeds, Erdogan must also feel the stick.