FLAME
X
Put text, tables or any other HTML contents here, as you would put in any other HTML page. ..... and more.
Skip to content
Home » New opportunity opens for the Palestinians: Will they seize peace and prosperity . . . or let it slip away again?
The Israel-Arab Alliance: Biden’s greatest opportunity for a foreign relations triumphJacques Gautreaux2020-12-28T15:31:07-07:00 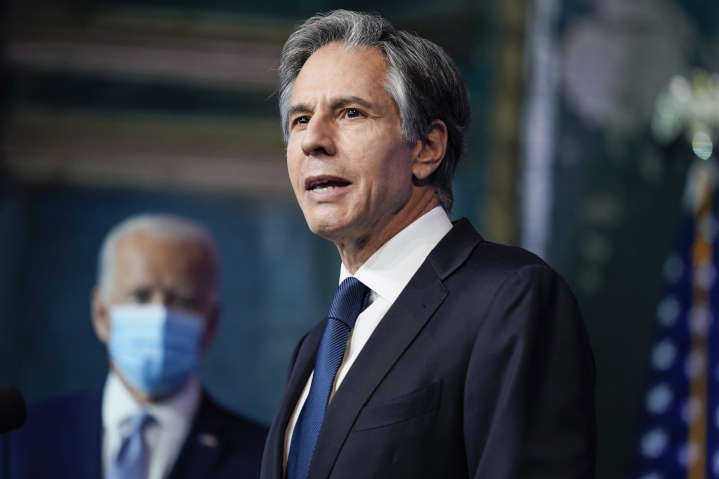 President-elect Joe Biden listens to his Secretary of State nominee Anthony Blinken. The two have the chance to create unprecedented peace and stability in the Middle East by harnessing the emerging new alliance between Israel and Arab Gulf States, including Saudi Arabia, in opposition to Iranian nuclear ambitions and colonial jihadism.

As I’m sure you’ve noticed, with four peace or normalization agreements signed between the State of Israel and Arab countries, there is unprecedented momentum in the Middle East toward a more peaceful future in one of the globe’s most treacherous regions. This is not only good for the peoples of that area, but also vital to America’s interests.

First, American allies, such as Israel and the pragmatic Sunni regimes in the region, are now officially on the same side and increasingly finding common ground. This clears the path for American diplomats to create new realities that better serve U.S. interests.

Second, a new robust and open coalition, robust and open coalition against Iran and its imperial ambitions has emerged in the Middle East. Every agreement between Israel and one of its Sunni neighbors is seen negatively in Tehran by the Ayatollah regime. This strengthens the forces of moderation against the forces of extremism, which extend from Iran through Iraq, Syria, Yemen, Lebanon and Palestinian terrorist groups.

This favorable geopolitical situation is clearly an achievement for outgoing President Donald Trump—one that undoes years of American failures in the region, especially our inability to curtail Iran’s dangerous influence, which has cast a pall on the entire Middle East and beyond. But it’s also a momentous opportunity for the Biden administration to achieve lasting peace and stability.

Indeed, it would be an error if Biden’s team did not build on this momentum and instead were to attempt to turn back the clock to the Obama years—an impossible task given all that’s transpired. The last thing the region needs is for the U.S. to pressure and distance itself from our allies Israel and Saudi Arabia, while simultaneously coddling and bribing Iran, thus emboldening violent forces in the region.

With President-elect Biden expressing his desire to reenter the Joint Comprehensive Plan of Action (JCPOA), otherwise known as the Iran nuclear deal, it is important that America’s allies in the region be consulted. Saudi Arabia, Bahrain, UAE and of course Israel are all threatened—not just by Iran’s illicit nuclear weapons program, but also from the Islamic Republic’s proxies in the region, whether those be the Houthis in Yemen or Hizballah in Lebanon.

In the past, disastrously, the focus of diplomatic consultation on Obama’s Iran deal was predominantly Western-oriented. The signatories to the JCPOA, in addition to Iran, were France, United Kingdom, United States, and Germany together with the European Union, plus Russia and China. The next Administration should seek to add Saudi Arabia and Israel to the circle of signatories or at least give them a place at the table. Consulting with those most threatened by Iran—and affected by any deal—is not just wise, it is necessary.

America’s allies in the region understand that Iran’s nuclear weapons program is just a means to the end—the end being continuation of its Islamist revolution and regional dominance. Creating a nuclear weapon is one way of achieving that goal, while arming its proxies to attack its adversaries and wreak havoc in the region is just another way of achieving its goals. Both paths should equally be denied the Islamic Republic.

President-elect Biden should seek to enlarge the terms of the agreement to ensure that Iran’s belligerent behavior becomes the focus and not just the nuclear weapons program. One of the biggest critiques of the 2015 deal was that the agreement did little to curtail Iran’s malevolent shadow on the region.

In the first year after the agreement, U.S. Director of National Intelligence James Clapper testified that “Iran—the foremost state sponsor of terrorism—continues to exert its influence in regional crises in the Middle East through the International Revolutionary Guard Corps-Qods Force (IRGC-QF), its terrorist partner Lebanese Hezbollah, and proxy groups . . . Iran and Hezbollah remain a continuing terrorist threat to U.S. interests and partners worldwide.” A month later, CENTCOM chief Gen. Joseph Votel testified that Iran had become “more aggressive in the days since the agreement.”

The U.S., along with its regional allies, should insert forceful clauses in the agreement that forbid Iran from assisting entities recognized by the State Department as terrorist organizations, like Kataib Hezbollah (KH) in Iraq, Hizballah, Islamic Jihad, Hamas and the Houthi rebel groups—the latter of which President Trump is considering adding as a designated terrorist organization. It should make these clauses central to Iranian compliance and any evidence demonstrating Iranian supply of weapons or resources to known terrorist organizations should ensure a harsh sanctions regime.

Iran’s threats in the Persian Gulf should also be restricted in any deal. Its bellicose actions in recent years and threats to close the Strait of Hormuz have massively upset gas and oil shipping lanes, which have a huge effect on American consumers by the rising of prices.

This has long been a tool for Iran to threaten the world in general and the West in particular against taking steps considered too harsh against the Iranians, and must be denied them. The U.S. should back a more forceful approach in the Persian Gulf and have a regular presence there, patrolling along with its allies, bringing a zero-tolerance approach to Iran’s attempts at disruption.

The Biden administration’s intentions to reengage with Iran and the international community is certainly not a categorical mistake. Indeed, the effort has potential to achieve historic results for the Middle East and globally—while at the same time dramatically advancing U.S. influence. However, we must heed history’s lessons and make and any future Iran deal far more comprehensive and robust—one that takes into account, first and foremost its regional allies.

Recent normalization agreements between Israel and the Gulf states make this far easier, since former opponents and adversaries in the region can now sit down on the same side of the table, as the recent trilateral meeting between Secretary of State Mike Pompeo, Israeli Prime Minister Benjamin Netanyahu and Saudi Crown Prince Mohammed bin Salman (MBS) at the Red Sea town Neom amply demonstrates.

Ironically—and unintentionally—the original Iran deal brought Israel and the Sunni states together in opposition to the agreement. Now, President-elect Biden has the opportunity to create the greatest era of peace the Middle East has ever known, particularly since its re-formation following World War II.

Please explain to your friends, family and colleagues—and in letters to the editor—that by ensuring a wise diplomatic policy of regional engagement, Biden could bring together even more nations in the region by enlarging the circle of participants and listening to the concerns of those most affected by the Iran and its regional ambitions.

This could turn the failure of American diplomacy in 2015 into one of its most illustrious achievements, by building on the four remarkable normalization agreements the Trump Administration managed to accomplish over recent months.