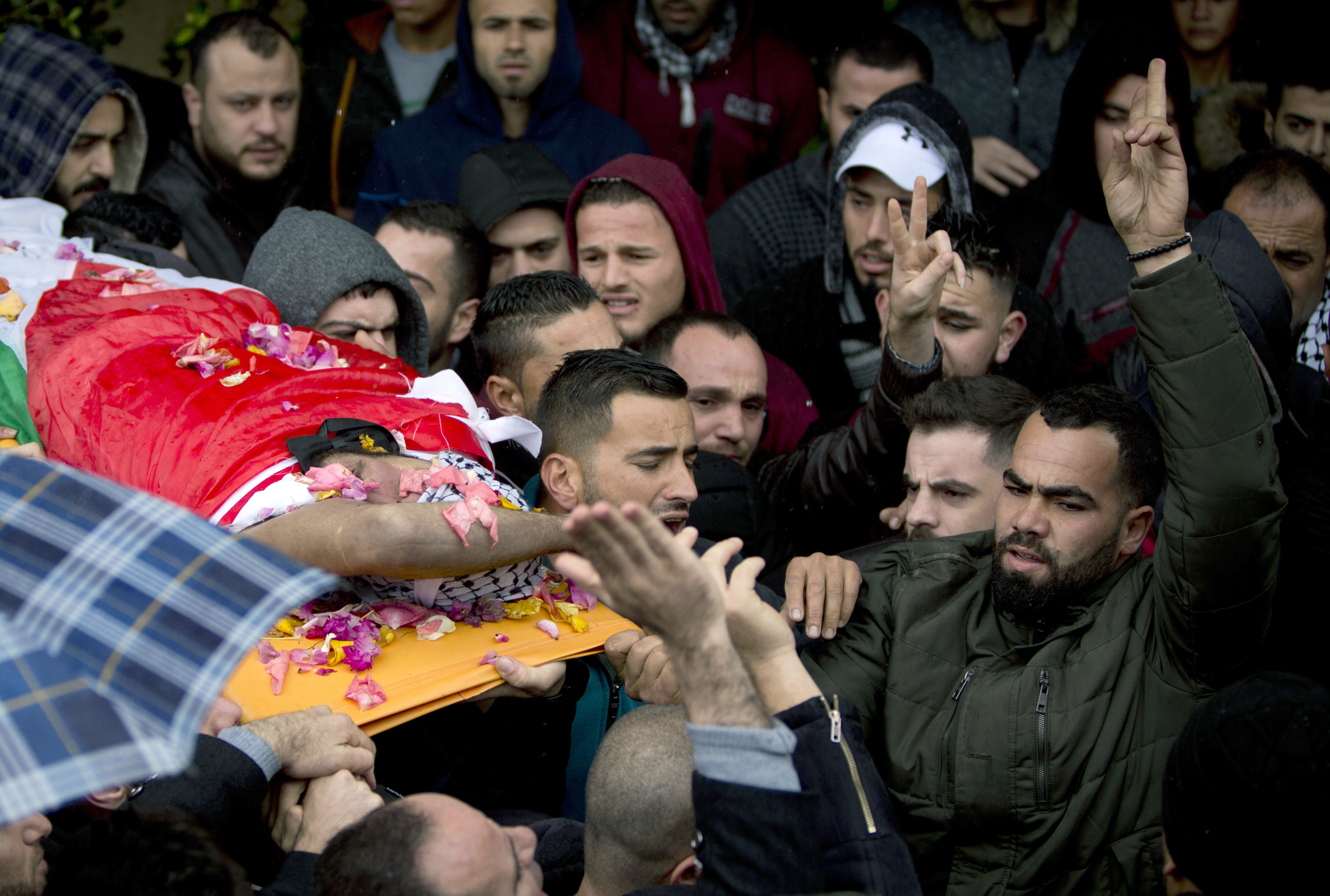 Palestinians carry the body of Elias Yassin, 22, who was killed in October by Israeli soldiers after he attempted to stab and kill Israeli civilians. The family of Yassin, like those of all who murder or attempt murder of innocent Jews in the name of “resistance,” qualify for a generous monthly stipend from the Palestinian Authority.

Palestinian “Pay for Slay” Program: Even Worse Than You Thought

The Palestinian Authority has a now-well-known program that provides suicide bombers and other terrorist murderers and their families with lifelong financial security. It is known as the Palestinian “Pay for Slay” program. A recent detailed analysis from the Jerusalem Center for Public Affairs has revealed the program’s startling details that are even more horrendous than its colloquial name suggests. Pay for Slay is even more of a threat to any peace prospects than you can imagine.

As we’ll see, Pay for Slay is a major incentive program of the Palestinian Authority to furnish large incentives to its citizenry to murder Jewish people. How does Israel make peace with an entity that has as one of its sacrosanct values—and one of its major budget lines—offering payments and heroic status to individuals whose contribution to Palestinian society consists of being terrorist murderers?

Under this Palestinian Pay for Slay scheme, not only are terrorist murderers—and their families—richly rewarded, but their salaries, bonuses and benefits ramp up according to the viciousness of their crimes and the Jewish body-counts attributable to their actions.

If you are a Palestinian Arab, the road to fame and fortune for you and your loved ones clearly points to the terrorist murder of Jews. When a visiting American, Taylor Force, was murdered on the boardwalk of Tel Aviv three years ago, his terrorist assailant was killed by Israeli police on the spot.

Taylor Force was a vacationing 28-year-old West Point graduate and military veteran who was working on his graduate degree at Villanova University. His terrorist murderer received a PA-televised heroes’ funeral, and his family was assured of lifelong salaries and benefits from the Palestinian Authority’s “Martyr’s Fund.”

Force’s murder ignited a furor in Washington, since he was an American citizen and a true hero. Congress passed—and President Trump signed—the Taylor Force Act in 2017, which has since resulted in the United States cutting off funding for the Palestinian Authority’s General Fund.

“Martyrs” and terrorist prisoners in Israeli jails, as well as their families, receive their PLO-distributed “salaries” and benefits through grants from that PA General Fund, which is totally controlled by PA President Mahmoud Abbas. Oh, yes, Abbas is also the head of the PLO and strictly controls its purse-strings.

How evil is the Pay for Slay program in concept and execution? Unfathomably awful for anyone with even a slight moral compass. Despite PA assertions that this is simply a “welfare program,” the payments to terrorist murderers are not based on “need” in any way. In fact, even the smallest Pay for Slay salary far exceeds the maximum welfare payments available to regular impoverished Palestinian Arabs.

These are incentives—they are meant to encourage the murder of innocent people. The incentives remove the high-minded political justification—resistance and welfare for the disadvantaged—and make it a simple murder-for-hire plan.

In 2016, the PA spent $150 million on “salaries” to prisoners in Israel’s jails. It also paid $180 million to families of these prisoners and to released prisoners. The combined $330 million paid out for Pay for Slay accounted for over 30% of all foreign aid the PA received from around the world—mainly from America.

But it gets worse, because the success of a terrorist’s attack is richly rewarded by the PA. If you received a mere 5-year sentence—presumably because you failed to actually murder any Jews in the course of your terror spree—you are eligible for $570 per month. If you hit the Palestinian version of a jackpot and murdered and injured many Jews, receiving a 25-year term, you will collect in $2,800 per month. If you are a lifer due to multiple terrorist murders, you get $3,400 a month.

Note that the average family income for Palestinian Arabs is $550 per month.

Once having served his sentence, the 5-year terrorist wannabe will get less than $200 a month for life; his more “successful” comrade, after 25 years, will enjoy a lifelong monthly pension of about $1,200.

Under PA law, ex-terror-prisoners also get a wealth of other benefits—based on time served. Perhaps the best is a guaranteed civil service job or military post and pension. The short-timer gets a job as a Head of Department. His more lethal comrade becomes an Undersecretary of a Ministry!

If the military seems more attractive, the “minor” terrorist is enlisted at the rank of First Lieutenant, while the more “successful” terrorist actually enters the PA’s army as a Major General.

And, in fact, the more one examines the terms and conditions of Pay for Slay, the more horrific it becomes, and the more obvious it is that this major PA program is fully worthy of its name. It is a lavishly funded incentive program for terrorist murderers. It also provides major financial and social-status incentives for their families to encourage them to become successful at their horrifying “work.”

No “land-for-peace” deal is going to heal the sickness of a Palestinian society that, since Pay for Slay was instituted by the PA-controlling Fatah in 1964, has taught its younger people that the hate-instilled terrorist murder of Jews is not only acceptable—it is to be generously incented and richly rewarded. How can peace develop with such an antagonist?

In talking with friends, family and colleagues, make sure they know about the horrific institution of Pay for Slay in the PA’s territories. (Hamas has a similar, but somewhat less generous program in Gaza.) Discuss with them the incentives for terror in the territories, and explain that American cuts in aid to the PA are driven by our understandable loathing of this near-unimaginable, inhuman policy.