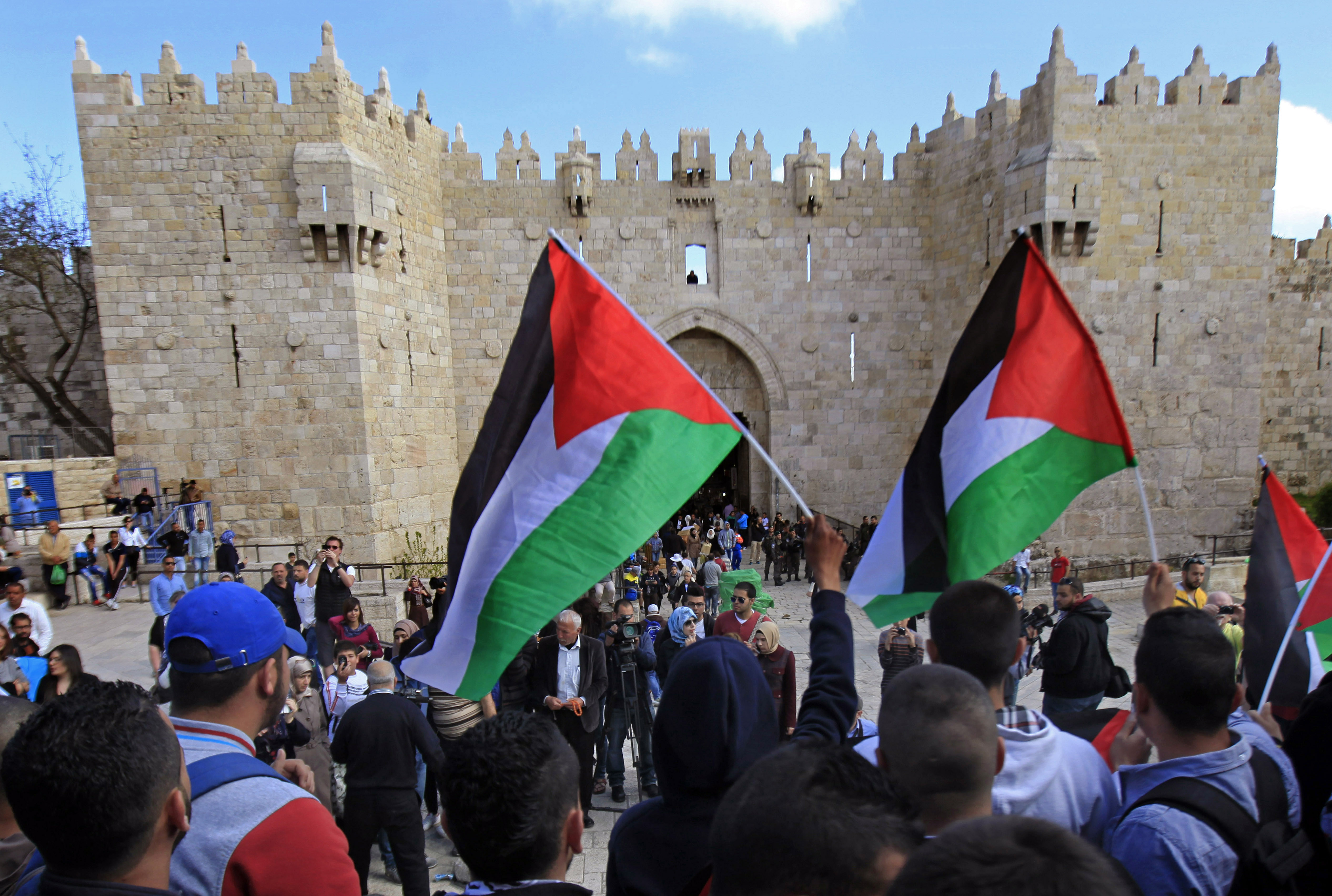 East Jerusalem Arabs demonstrate against lack of Arab power in Jerusalem. But they still didn’t vote in recent Jerusalem city elections . . . thanks to threats from Ramallah.

The hope of eastern Jerusalem’s Arab citizens to participate in and benefit from their municipal government was frustrated again by Arab leaders there and in Ramallah. Of course, none of the Palestinian Arabs has been allowed to exercise meaningful voting rights since the 2005 election of Mahmoud Abbas—now in the fourteenth year of his four-year term of office—and the abortive 2006 election of Hamas as the legislative majority.

The frustration of any Arab desire for real participation in any democratic election anywhere was continued. This time, most regrettably, it was in Israel’s capital. This time, it victimized Jerusalem’s Palestinian residents—fulfilling the same anti-democracy impulse that has plagued all of the surrounding Arab nations.

Jerusalem held its 2018 city elections on October 30. With over 350,000 eligible voters citywide, Palestinian Arabs living in East Jerusalem—reunited with West Jerusalem after the 1967 War—constitute over 100,000 of them. This Arab minority is actually larger than the number of Ultra-Orthodox voters in the city.

The actual number of eastern Jerusalemites who voted? About 3,000.

Why? Because eastern Jerusalem Muslim leaders and Palestinian Authority leaders and their media made it clear that going to the polls would be bad for the health of those foolish enough to do so—and would endanger their families as well.

The leader of the Al Aqsa Mosque—heir to Hitler’s favorite Muslim leader, Grand Mufti Amin al-Husseini—even issued a fatwa (religious ban) on any Muslim who voted in the elections.

Ruth Eglash, writing in the Washington Post on the day before the election, discussed one of the few Palestinian candidates:

Days after he formally announced his candidacy and his 11-member party . . . his team started receiving threats. [He] alleges the intimidation campaign was directed mostly from the Palestinians’ de facto capital, Ramallah, with Palestinian journalists told not to interview him and representatives of Palestinian factions in Jerusalem sent to warn him to back down.

“One of my candidates, a student at al-Quds University, was forced to enter the campus at the back gate and have someone accompany her to class,” [he] said. “It was very scary.”

Her source withdrew his candidacy—and eastern Jerusalem Arab potential voters got the message. Another candidate was accused of being a Zionist and collaborator, and a kidnap attempt was made on his son.

All this means that Arabs from eastern Jerusalem are again unrepresented in City Hall. So when the City Council meets to divvy up the municipal budget, the Arab voice will be silent. Such money and attention as are devoted to eastern Jerusalem will only flow because of the pure generosity of some council members.

This virtually ensures a continued under-investment in the infrastructure and benefits for eastern Jerusalem’s Arabs. Council members look out first for their prime constituencies on whom they depend for support in the future—not stay-at-home non-voters.

Eastern Jerusalemites understand this well. They and their allies complain constantly about the inequities in municipal services in Jerusalem (and elsewhere in Israel). That’s why in pre-election polls, most Palestinian Arabs had expressed a desire to vote. After dire warnings from their leaders, only 1.2% did—far too few to qualify for a Council-seat at the table.

Spread the truth about the victimizing and predatory nature of Palestinian leadership, and let your friends, family and colleagues know how Abbas et al ensure that their own people lack a voice in Israeli democracy and asset allocation.

In this week’s featured FLAME Hotline article, Bassam Tawil, a Palestinian analyst, explores the craven motives for this interference by Palestinian leaders—even though those actions directly harm their countrymen. Writing at the end of summer, Tawil perfectly predicts what actually happened in late October—and why.

I think that you’ll see that it fits in with the idea that pretty much everything Palestinian leadership has done—for decade after decade—is contrary to the best interests of the unfortunates they are supposed to lead.

Ramadan Dabash wants to help the residents of his village of Sur Baher in particular, and east Jerusalem in general, improve their living conditions. He wants them to receive better services from the Jerusalem Municipality. The 52-year-old businessman and social activist, however, has been facing a campaign of threats by several Palestinian leaders and administrative bodies over his decision to run in the municipal election, slated for October 2018.

Recently, Dabash announced his decision to run in the upcoming election at the head of an Arab list called Jerusalem for Jerusalemites. He has repeatedly made it clear this summer that his decision is not politically motivated and that his only intention is to seek improved municipal services for the Arab residents of Jerusalem. Dabash has also called on Arab voters to end their boycott of the municipal election because they are the only ones who stand to lose from such a move.

Facing threats and pressure from various Palestinian factions and leaders, most of the Arab residents of Jerusalem have been boycotting the municipal election under the pretext that participation in the vote was tantamount to recognizing Israeli sovereignty over east Jerusalem, which was annexed to Israel in 1980. This boycott has hurt the Arab residents themselves, who were left without representatives in the municipal council, someone who would fight for their rights. The Jerusalem Municipality has, despite the absence of Arab representatives, continued to provide various and basic services to the Arab residents of the city.

Dabash believes that it is time for the Arab residents to take matters into their own hands by participating in the municipal election. “I want to help my people because we’re not getting all the services they deserve from the municipality,” he said.

“My initiative has nothing to do with politics. It is only about improving our living conditions and obtaining services that we are entitled to as residents of the city. Israel hasn’t invested enough in the Arab neighborhoods, and the Palestinian Authority doesn’t really care about us. This is why we have decided to take matters into our own hands and try to help our people by getting elected to the municipal council.”

Palestinian leaders want Arab residents to boycott the election without offering them any alternative. Even senior Palestinian officials such as Hatem Abdel Kader, a former Palestinian Authority Minister for Jerusalem Affairs, has admitted that the Palestinian government has not done enough to help the Arabs in the city. “Jerusalem is at the bottom of the Palestinian’s list of priorities,” he said. “The Israelis have a plan and vision for Jerusalem, while the Palestinians have nothing to offer.”

Palestinian leaders, in fact, do have something to offer the Arab residents of Jerusalem: threats and intimidation. These leaders do not want to see any improvement in the lives of the Arabs in Jerusalem so that they could continue to incite against Israel and accuse it of discriminating against its Arab population. One of the Palestinians’ biggest lies is that Israel is conducting a policy of “ethnic cleansing” against the Arabs in Jerusalem.

They keep repeating this lie each time the Jerusalem Municipality demolishes houses built without proper permits from the authorities—something that Israel does also against Jews who commit the same offenses.

The Palestinian campaign of incitement against participation in the municipal election reached its peak recently with the publication of a fatwa (Islamic religious decree) that bans Muslims from taking part in the vote. The fatwa, which was issued by the east Jerusalem-based Palestinian Supreme Council of Fatwa, said: “Participation in the municipal election, either by voting of presenting candidacy, is religiously forbidden. The disadvantages of participating in the election are bigger and greater than any other gained interests.”

In other words, the fatwa is threatening the Muslim residents of Jerusalem that anyone who dares to seek improved municipal services for him and his family would be considered as if he were an infidel. This is a direct call on extremists to target people such as Dabash and people like him, whose only crime is that he wants to do something good for the Arab residents of Jerusalem.

PLO Secretary-General Saeb Erekat also issued a similar threat against Dabash. In a statement, Erekat claimed that “any participation in the elections will assist the Israeli establishment in promoting the ‘greater Jerusalem’ project since the municipality is an arm of the Israeli government and plays a complimentary role in implementing its colonial settlement project and ethnic cleansing while making living of Jerusalemites impossible in their city.”

But here is an encouraging development: despite the campaign of threats and intimidation, Dabash says he is determined to proceed with his plan to run in the election and that he is not scared.

Another encouraging development that shows that the Arabs in Jerusalem are no longer willing to listen to what Palestinian leaders are saying: almost 60% of east Jerusalem’s Arabs believe they should participate in the city’s municipal election, while only 14% oppose doing so, according to a poll commissioned by Hebrew University in Jerusalem.

Contrary to the Palestinian leadership’s claim, Arab participation in the municipal election does not come with any political implication. The Arabs who are taking part in the election are not being asked to recognize Jerusalem as Israel’s capital. Nor are they being required to swear allegiance to Israel.

Palestinian leaders and their religious clerics do not want to see Arabs live a comfortable life under Israel. They are afraid that the world would see that Arabs can have a good life under Israeli sovereignty. They are also afraid that Palestinians living under the Palestinian Authority in the West Bank and Hamas in the Gaza Strip will start envying the Arabs living in Israel—and then demand from their leaders similar conditions.