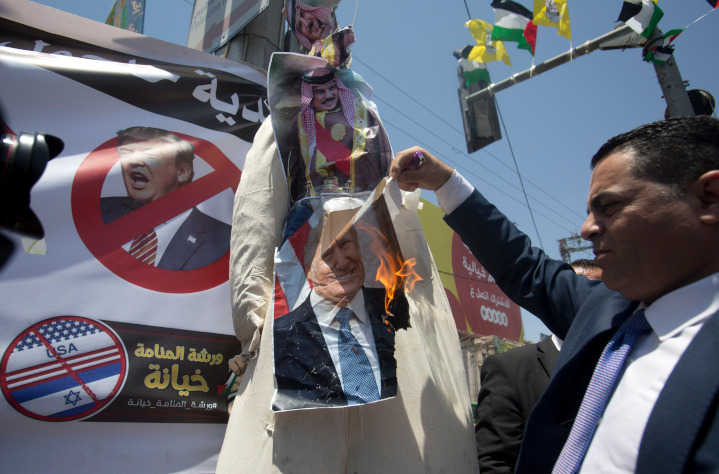 Palestinian near Hebron burns photos of Bahrain’s King Hamad al-Khalifa and President Donald Trump in protest of increasing normalization of relations between Arab nations and Israel, which have been brokered by the United States.

New opportunity opens for the Palestinians: Will they seize peace and prosperity . . . or let it slip away again?

The recent normalization agreement between the State of Israel and the United Arab Emirates has brought unprecedented hope and the promise of peace and stability in the Middle East.

It has also postponed the application of Israeli sovereignty to parts of Judea and Samaria, ostensibly to give the Palestinian leadership a window of opportunity to come to the table to arrive at a final status agreement with Israel.

Yet, the clock is ticking, and the perpetual question looms: Will the Palestinian leadership remain locked in its over 100-year war of violent rejectionism against Jewish statehood? Many fear Palestinian leaders will again fail to grasp the opportunity for peace and force their people to suffer for their obsession with ending the Jewish state.

With more and more normalization steps taking place every week—such as Bahrain now recognizing Israel and Saudi Arabia officially letting Israeli commercial planes fly over their territory, plus the possibility of more Arab nations signing peace agreements in the coming months—there is great optimism that Middle East conflicts can be resolved.

This change in Arab attitudes toward Israel increases the pressure on the Palestinians to act. With every Arab gesture of acceptance of Israel’s existence, Palestinian political leverage diminishes. If peace in the Middle East no longer depends on an Israel-Palestinian resolution, why should the world put energy into it—especially since the Palestinians always refuse?

This is a momentous time to put disagreement aside and look to the future, bringing peace, stability and security to the region. The stage is set for the Palestinians to make a commitment. Israel is waiting at the table and the Arab world is desperate to usher in a full regional peace.

Unfortunately, Palestinian leadership is once again rebuffing all attempts by the U.S., the wider Arab world and the international community to finally bring peace and prosperity to their people.

After release of the Israel-UAE deal, the UAE Minister of State for Foreign Affairs Anwar Gargash said that the agreement has bought the Palestinians time and the chance for peace. He said that he is urging the parties to sit and negotiate. Prime Minister Benjamin Netanyahu has repeatedly said he is ready for peace and will meet anywhere, at any time, with all issues on the table.

However, Palestinian President Mahmoud Abbas has called negotiations on the basis of the “Peace to Prosperity” plan a conspiracy, forbidden his people from taking part in conferences that would help the Palestinian economy, and called for “days of rage” in response.

Yet time is growing short for Palestinian leaders. History is calling them to act now to transform their people’s future. If the Trump Administration loses power—or its interest in this issue—the “Peace to Prosperity” plan will be swept away, and another Palestinian generation will continue to suffer.

What’s more, the wider Arab world is becoming increasingly frustrated and impatient. As a prominent commentator wrote last week in the Saudi Gazette: “As a human being, as a Muslim and as an Arab, I am saddened by the situation of the Palestinian who was traded in by his political leaders. I wish him well, and hope that he would wake up from his coma and adopt what is good that serves his interest and his future.”

An Emirati academic wrote in the Abu Dhabi-based “The National” newspaper that: “The UAE-Israel accord is a win for every Muslim.”

These are just two of many examples of the change in attitude to peace with Israel in the wider Arab and Muslim world. More and more people are embracing the change of desert winds in favor of normalization and warmer relations with the Jewish State.

Other taboos are being broken as well. A Muslim majority state, Kosovo, will open an embassy in Jerusalem, fully recognizing Israel’s sovereignty in its capital city. Serbia will become the first European nation to open an embassy in Israel’s capital, and Malawi has stated that it will become the first African nation to open a diplomatic mission in Jerusalem.

Perhaps the greatest reflection of the sea change in Arab sympathies toward Israel was the flat-out rejection by the Arab League of several resolutions proposed by Palestinian leader Mahmoud Abbas condemning the UAE for striking a peace with Israel.

The Palestinians need to see in the UAE-Israel deal, the normalization with Israel by Arab and Muslim states, and the currents in the region, as an opportune time to negotiate. The leverage they have held is slipping away quickly. Supporters of the Palestinian cause in the U.S. would be well advised to counsel the Arab group to act now, while some opportunity remains.

Unfortunately, Palestinian leaders don’t offer much hope. As senior Palestinian Authority leader Hanan Ashrawi made clear recently, in reaction to the normalization process: “The Palestinians are willing, generation after generation, to continue their struggle.” This amply demonstrates that their leadership sees no urgency and appears unprepared to move an inch from its maximalist and rejectionist stand.

Why do Palestinians leaders persist in their failed strategy? After refusing an overly generous peace offer by Prime Minister Ehud Olmert in 2008, Abbas thought he could afford to do so, because, as he told the Washington Post, he believed that “in the West Bank we have a good reality.” This confidence today, however is misplaced. The wall of obstruction that Palestinian leadership has built carefully over decades with the help of fellow Arab leaders is clearly crumbling.

While the Middle East moves forward without them, billionaire Abbas and his multi-millionaire cronies are squandering perhaps a final opportunity—and it is their people who will continue to suffer.

I hope you’ll help friends, family, colleagues and your elected representatives understand that the Palestinians are being left behind primarily by their leadership’s pathological rejectionism, but also by a realization in the wider region that Arab nations have much to gain from Israel—through improved economic options, security, high-tech innovations and water and agricultural technology.

Emphasize that this moment could also be a shining reality for the Palestinians . . . if they would seize the rapidly closing window of possibility.