FLAME
X
Put text, tables or any other HTML contents here, as you would put in any other HTML page. ..... and more.
Skip to content
Home » Despite vicious attacks on Israel by the media, the U.N. and Islamists, we continue to win!
New Israel-UAE pact shatters false myths about peace with PalestiniansJacques Gautreaux2020-08-24T13:25:59-07:00 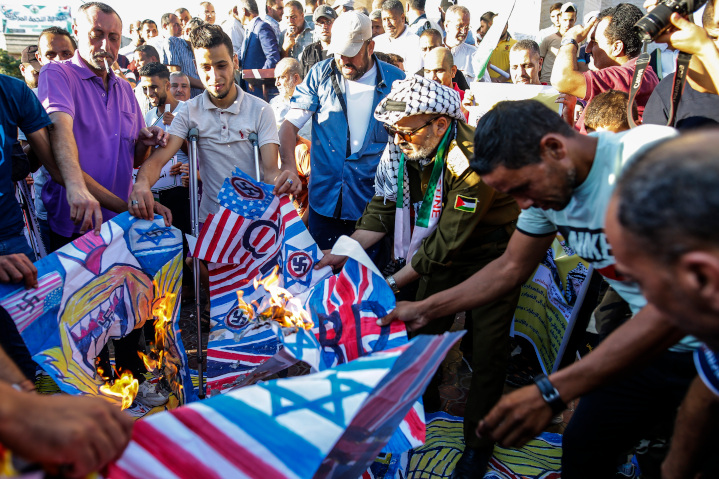 Palestinians in Gaza protest new peace agreement between Israel and the United Arab Emirates, since it signals a new normalization of relations between the Jewish state and Arab nations and cancels the veto power the Palestinians have wielded against peace in the Middle East.

For decades, international decision-makers and opinion-shapers have theorized that Israel will not be accepted in the region until it makes peace with the Palestinians, and that all wars and conflicts in the Middle East are somehow connected to the Israel-Palestinian conflict.

Former President Jimmy Carter once stated that, “Without doubt, the path to peace in the Middle East goes through Jerusalem.” Another enthusiast of what has become known as ‘linkage’ is former U.S. National Security Adviser Zbigniew Brzezinski, who said, “The Israeli-Palestinian conflict is the single most combustible and galvanizing issue in the Arab world.”

The Israel-United Arab Emirates peace agreement, or the Abraham Accord—in addition to credible talk of other Arab nations also signing on—has exploded the belief that the Jewish state is isolated in the region.

It’s also sent a clear signal that the Palestinians, in their decades of rejectionism, can no longer place a veto on Arab nations making peace and establishing official relations with Israel.

But of course, the idea that the Israel-Palestinian conflict was the focal point of the region’s unrest and the most challenging to solve has never been consistent with the facts.

Many conflicts have been far more deadly and are far more entrenched, based on grievances stretching back hundreds of years. The Sunni-Shia conflict, for example, predates the modern era, and the internal wars that have devastated Middle East nations like Syria, Libya, Lebanon and Iraq are a result of historical and even ancient disputes.

If one looks at the number of Muslim fatalities from armed conflicts since the establishment of the State of Israel in 1948, well over 12 million have been killed in conflicts around the wider region in wars such as Syrian and Lebanese civil wars and the Iran-Iraq conflict.

Fewer than 100,000 Arabs have died in the Israel-Arab or Israel-Palestinian conflict, the majority of which died in Israel’s defensive wars against its neighbors. It means fewer than one per cent of all deaths in conflicts in the region were in the context of the Israel-Arab/Palestinian conflict. This statistic alone demonstrates that the conflict with Israel is one of the least bloody or central in the region.

In fact, the main obstacles facing the region have always been low levels of development, freedom, empowerment of women and education. These are the conditions that led to the Arab Spring, which spread throughout the region beginning in the early 2010s. When millions of Arabs took to the streets in their various nations, they did not chant against Israel but against those who deprive them of basic human rights and economic well-being.

There have been many signs and chants at demonstrations throughout the region, in places like Lebanon, Syria and Egypt, specifically saying that they hate other more threatening actors—like Hezbollah, Iran’s Revolutionary Guard, the Muslim Brotherhood and Hamas—far more than Israel, and they will no longer be distracted from the true causes of their ills.

Indeed, obsessing on the myth of linkage has created overblown pressure from the U.S. and European nations to force a peace agreement between Israel and the Palestinians. It has also allowed other players in the region, such as Iran, Turkey and Hezbollah, to evade responsibility for their destabilizing actions.

Influential international players, like former U.S. President Barack Obama and former Quartet Envoy and British Prime Minister Tony Blair—who stressed the importance of signing an agreement with the Palestinians before making peace with the wider Arab world—have deprived the region of cooperation with Israel on vital issues like combatting desertification, water desalination and conservation and agritech.

Fortunately, the region has finally moved away from the paradigm of Israel opposing or defending against the Arab nations.

This is partly because of disappointment in large parts of the Arab world over the rejectionism of Palestinian leadership, especially the Palestinians’ spurning opportunity after opportunity to negotiate. Most notably Palestinian leaders failed to accept generous offers by several Israeli prime ministers, most notably proposals from Ehud Barak in 2001 and Ehud Olmert in 2008, and international initiatives, such as the Clinton Parameters.

More recently, the fact that Palestinian leader Mahmoud Abbas continues to refuse to sit in a room with Prime Minister Benjamin Netanyahu has been met with exasperation by Arab heads of state in the wider region.

Additionally, the rise of non-Arab actors like Iran and Turkey and extremist organizations, like ISIS, has provided Israel and moderate Arab nations with common foes and the basis for security and strategic cooperation. Frankly—and blessedly—it indicates that the Israel-Arab conflict as a concept is dead and buried.

Today the region is split between the pragmatic and moderate and opposed by the extremist and destabilizing nations, in which Israel finds itself on the same side as many former foes. We see regularly on social media and during demonstrations in Arab capitals that Israel is no longer a hated and untouchable entity.

The peace-for-peace paradigm at the heart of the agreement between Israel and the UAE can become a good blueprint for Israel’s conflict with the Palestinians, which means that first there should be an agreement to end any outstanding conflicts and claims, as well as full mutual recognition. From that point, other unresolved issues will be easier to solve.

It’s clear that while the agreement with the UAE is the beginning of an unprecedented process, it is far from the end of a process.

Already, signs from Sudan, Oman, and other Gulf nations indicate that more normalization agreements and the establishment of full relations could be on their way. Yet even without these extensions, ties between Israel and Arab nations are more open than ever. Prime Minister Netanyahu and then Transportation Minister Yisrael Katz were warmly welcomed in Oman last year. Earlier this year, in February, Netanyahu met with chief of Sudan’s Sovereignty Council, Abdel Fattah al-Burhan, in Uganda during February.

The region is changing before our very eyes, and the Palestinians and their supporters are angry they are losing one of the only levers they can use to bully Israel into greater concessions: Open, independent relations with the Arab world.

I hope you will point out to friends, family, colleagues and your elected representatives that the UAE-Israel agreement is a very positive development and can become the basis for greater peace and stability in the Middle East, with hopefully more nations joining the Emiratis in opening formal relations with the Jewish State.

This breakthrough has finally shattered the false “linkage” created by some, which declared that regional peace can only come through Ramallah first. This bottleneck provided the rejectionist leaders in the Palestinian Authority a veto on Israel’s standing in the Middle East, and actually fueled the regional struggle between extremists, like Iran, Hezbollah and Hamas, and moderates, like Israel and many of the Gulf Nations.