FLAME
X
Put text, tables or any other HTML contents here, as you would put in any other HTML page. ..... and more.
Skip to content
Home » Despite vicious attacks on Israel by the media, the U.N. and Islamists, we continue to win!
Myth vs. Fact: Are today’s Jews the descendants of ancient Israelites?Jacques Gautreaux2020-08-10T11:14:38-07:00 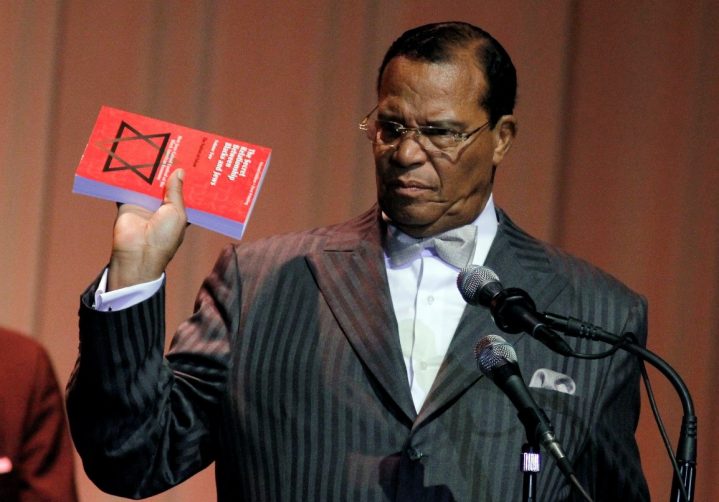 Hate preacher Louis Farrakhan, leader of the Nation of Islam, holds aloft his infamous tone “The Secret Relationship Between Blacks and Jews,” which disseminates a variety of myths about Jews. Farrakhan has been widely quoted by many celebrities recently, who have spread the libel that the Jewish people have no historic connection to the Land of Israel.

Myth vs. Fact: Are today’s Jews the descendants of ancient Israelites?

Many opponents of Israel try to disconnect the Jewish people’s long-standing relationship with the Land of Israel as a way of delegitimizing the modern State of Israel and Zionism. They claim the Jewish people today are not descended from the ancient Hebrews and Israelites and thus try to weaken the case for Zionism and the reestablishment of Jewish sovereignty in its ancestral homeland.

The claims do not come from any one community and have been diffused throughout the years by white-supremacists, radical Islamists, far-left and far-right conspiracists, Japanese doomsday cults and parts of the African-American community, whether the Nation of Islam or the Black Hebrew Israelites.

Many of these generally opposing groups lean on the so-called “Khazar Myth,” which posits that all or a majority of today’s Ashkenazi Jews are descended from the Khazars, a multi-ethnic conglomerate of mostly Turkic peoples originally from the central Caucasus, who, according to this theory, at some point in history mass-converted to Judaism. This position tries to prove that a large part of world Jewry has no roots in the Land of Israel.

However, this theory has found no support among any serious historians, archaeologists or geneticists. It rests on no evidence except the need of some to disconnect the Jewish people from the Land of Israel. Indeed, linguist Alexander Beider concludes in his excellent article that “Globally speaking, all arguments suggested by the proponents of the Khazarian theory are either highly speculative or wrong. They cannot be taken seriously.”

Indeed, the Khazar Myth’s only purpose seems to be the delegitimization of Zionism.

This, and other theories about the origins of the Jewish people outside of the Land of Israel, are merely political arguments that try to use distorted history, utilizing inaccurate archeological and genetic proofs to make these false claims. They also ignore the overwhelming evidence that shows a direct link between the Jews living today around the world and their ancestors who lived in the Land of Israel during the First and Second Temple periods.

Firstly, and most importantly, there has been an unbroken presence of Jews in the Land of Israel since the destruction of Jewish sovereignty and the sack of Jerusalem in the first century CE. These Jews who managed to remain, against all odds, in the Land of Israel for two millennia, were joined by various communities and individuals from around the Diaspora during the first few centuries after the dispersion until the 20th century.

All these Jews had a clear linguistic, cultural and traditional line of transition completely unique to every Jewish community around the world. For example, a Jew from Yemen and a Jew from Poland would have different characteristics and accents, but they would use similar prayer books, religious treatises and traditions. They would be able to relatively seamlessly pray and practice their religion in each other’s community.

Digging a little deeper, several genetic tests and research have proven that disparate and different Jewish communities in the four corners of the earth share common DNA markers. Studies of autosomal DNA, which look at the entire DNA mixture, show that Jewish populations have tended to form relatively closely related goups in independent communities, with most in a community sharing significant ancestry.

Obviously, there were always converts to Judaism and sad episodes of rape, which has caused outside contributions to the Jewish gene pool.

Nevertheless, for populations of the Jewish Diaspora, the genetic composition of Ashkenazi, Sephardi, and Mizrahi Jewish populations show significant shared Middle Eastern ancestry. These results, according to prominent geneticist Doron Behar and many other academic experts in 2010, show a remarkable consistency “with a historical formulation of the Jewish people as descending from ancient Hebrew and Israelites of the Levant” and “the dispersion of the people of ancient Israel throughout the Old World”.

In addition, Jewish communities around the world all show a very specific and unbroken connection to Israel. Every synagogue faces towards Jerusalem, and rare is the prayer or blessing that does not invoke a return to Israel or Jerusalem. Many festivals end with the hope: “Next year in a rebuilt Jerusalem.”

Almost every event in the Jewish lifecycle remembers the connection of the Jews to Israel, whether it is the breaking of the glass under the wedding canopy to remember the destruction of Jerusalem, or the dirt from the Holy Land that is supposed to be buried with every Jew in any cemetery in the world.

The Jewish connection to the Land of Israel was unbreakable and a return to the land was always the central focus of Jews and Jewish communities for thousands of years. Israel was the religious, civil and national center for all Jews at all times.

Perhaps what rankles opponents of the State of Israel and Zionism is the fact that the Jews are the only people who can demonstrate indigeneity in the Land of Israel as the place where its culture, language and civilization were formed.

No other people speak or use Hebrew or have their singular focus on the sliver of land immediately at the eastern end of the Mediterranean. No other religion or people’s holy books mentions Israel, Zion or Jerusalem nearly as many times as the Torah. The Quran does not mention them at all.

These are unbreakable bonds, and the most up-to-date historic and archaeological work discovers new artifacts and proofs every day of the ineffable Jewish connection to the Land of Israel. No serious person can claim that Jews never lived in the Land of Israel, though some still try, attempting to sever the connection between today’s Jews and the ancient Hebrews and Israelites.

These lies need to be debunked because they are widespread and have been raised in recent weeks by well-known celebrities, like actor and rapper Ice Cube, comedian Nick Cannon and American football players DeSean Jackson and Larry Johnson. Their evidence is never more than distorted propaganda that has already been debunked by serious researchers.

I hope as you discuss Israel and the Jewish people, you will point out to friends, family, colleagues and your elected representatives that Israel and the Jewish people are inexorably connected, and those who try and disconnect them do so because of malice and demonstrate their hatred for the Jewish State. Because anti-Semitism never rests, these fabrications will keep spreading unless we continue to demonstrate with fact, history and reason why they have no basis in truth. The Jewish people’s connection to Israel is unique, unbroken and consistent. Our traditions and miraculous history can be seen as a continuous love affair between a people and its ancestral homeland.