FLAME
X
Put text, tables or any other HTML contents here, as you would put in any other HTML page. ..... and more.
Skip to content
Home » Despite vicious attacks on Israel by the media, the U.N. and Islamists, we continue to win!
Middle East Christians Are Safe Only in Israel_January 1, 2019Jacques Gautreaux2019-01-17T18:20:33-07:00 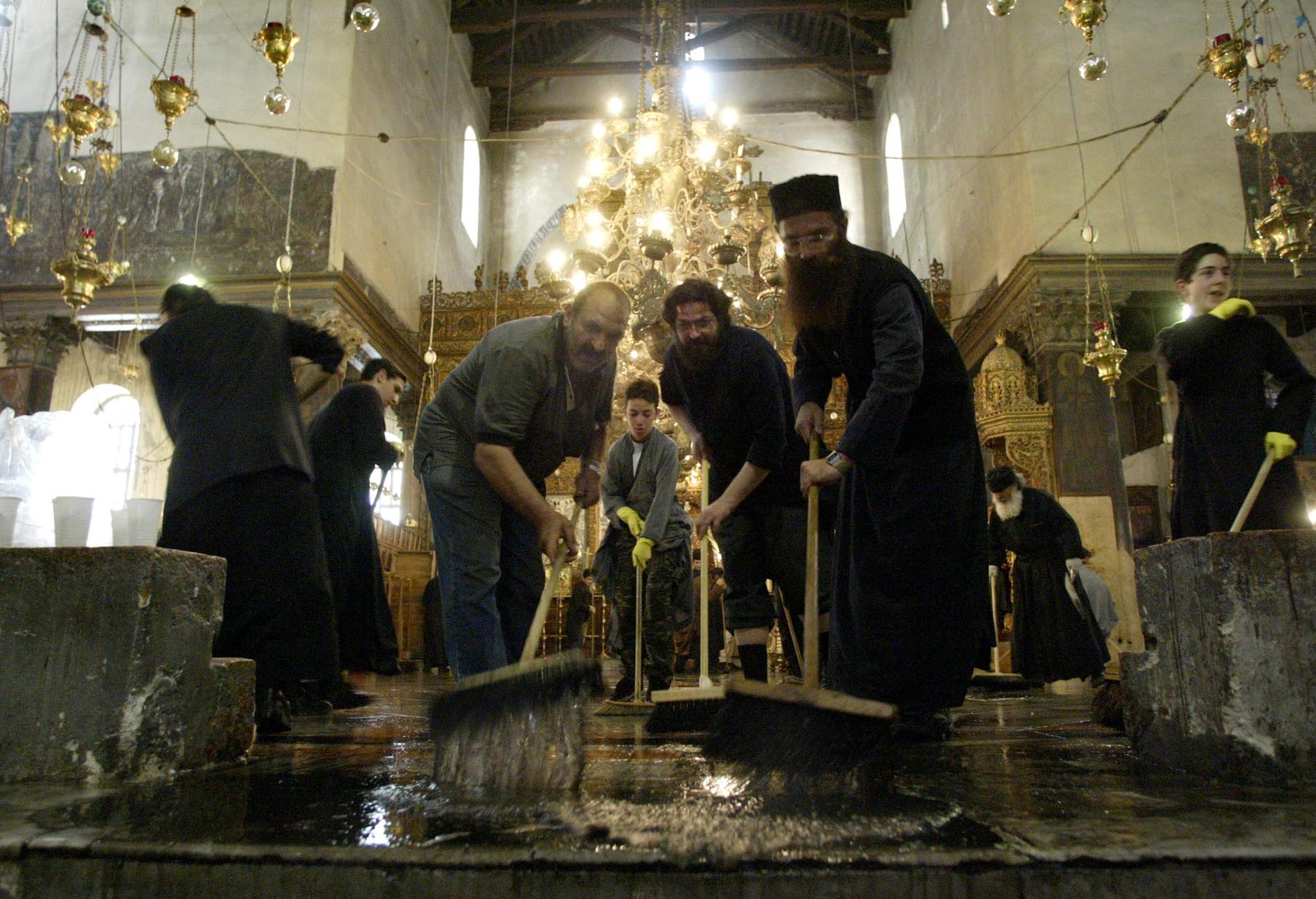 After Yasser Arafat’s Aqsa Martyrs Brigade took over the Church of the Nativity in Bethlehem, a weeks-long standoff finally ended in May, 2002. The terrorists desecrated and robbed the Church. Here, Christian clerics clean up the ruins inside their church.

Middle East Christians Are Safe Only in Israel

Middle East Christians are fleeing for their lives from the lands that gave birth to their religion two thousand years ago.

In Judea and Samaria—the West Bank—the percentage of Middle East Christians has slumped from 20% to 2% since the 1967 War that drove out the Jordanians. Today, only about 46,000 Christians live there, the rest having been driven out by religious persecution, the Palestinian Authority’s discriminatory laws and oppressive regime, and Islamist terrorism.

Most of Gaza’s 3,200 Middle East Christians have taken flight since the Hamas takeover in 2007. Gaza’s Christian population has shrunk to 836 people today. And most of those want to leave the religiously and economically oppressive hellhole.

As our holiday season draws to a close, it is important to celebrate the one place in the Middle East where Jews and Christians can live amicably and with full and equal rights: Israel.

Surveying the dire plight of Christians throughout the Middle East, there is only one good place there for a secure and decent life—free from terrorism and religious persecution—and that is to be found in the Jewish state: Israel.

Middle East Christians from all over the majority-Muslim countries—from Egypt to Iran, and most notably in the Palestinian territories—are fleeing in large numbers. Most seek refuge in Western countries.

But the only country in the Middle East with a stable and growing Christian population is Israel. The population of Middle East Christians in Israel continues to grow by about two percent per year, and 175,000 Christians make their home there.

By comparison, Egypt’s Coptic Christian communities have been targeted for extermination by the Muslim Brotherhood, ISIS and others. In 2011, Alexandria’s majestic Two Saints Church was firebombed, with the loss of 23 lives. In the city of Edfu, a 3,000 man Muslim pogrom against Middle East Christian churches, shops and homes shattered the Coptic community.

When Copts demonstrated in Cairo about these assaults, soldiers attacked these Middle East Christians, killing 27 and gravely injuring hundreds of them. Copts struggle to survive economically and are largely excluded from Egyptian civil society.

Middle East Christians unfortunate enough to reside in Iran face a government that is unremittingly and lethally hostile to non-Muslims. Under Sharia law, converting to Christianity is a crime punishable by death, as is proselytizing. New Testaments, when found, are burnt or re-purposed as toilet paper.

Lebanon—long a Christian bulwark in the Middle East—can boast of Christian presence in the national government. But the Lebanese government is fully under the control of the Shiite terrorist organization, Hezbollah. Christians there are aware that beneath the veneer of governmental tolerance, there is a seething resentment of all things Christian in the Muslim umma.

The chaos of the past two decades in Iraq and Syria have seen the Middle East Christian populations there fall by more than half. Iraq’s Christian population plummeted from over a million to four hundred thousand, as these Christians fled first to refugee camps in Syria and then onward to Jordan. They have been joined by three hundred thousand native Syrian Christians. And ISIS terrorists have killed or forcibly converted entire Christian communities.

On the other hand, the situation for Middle East Christians living in Judea and Samaria under the Palestinian Authority and in Gaza—under Hamas—is perhaps the most dire.

Bethlehem is a case in point. It now has a much smaller Middle East Christian population than it once had. When Bethlehem was turned over to the Palestinian Authority (PA) after Oslo in December, 1995, the “Little Town” of 25,000 people was 80% Christian. PA rule has destroyed that majority: the latest census estimates a mere 20%-and-shrinking Christian population there.

This has been caused by hostile PA land-transfer rules, terrorism, and an increasingly exclusionary local civil society. The 2002 takeover of the Church of the Nativity by the Aqsa Martyrs’ Brigade signaled to Middle East Christians that they were no longer welcome in Christianity’s “home town.” PA courts routinely dispossess Christians of their land, giving preference to the flimsiest of Muslim claims.

Much as in Hezbollah-controlled Lebanon, Middle East Christians are represented in Bethlehem’s municipal government as dhimmis only with the sufferance of PA and Hamas power-brokers and roving anti-Christian gangs.

This holiday season, the military wing of the Popular Resistance Committee in Gaza proclaimed the observance of Christmas there “an abomination,” and vowed retribution on all who celebrated the Christian holy day. The only silver lining for Middle East Christians is that continued Hamas persecutions have shrunk their population in Gaza to mere hundreds. Most of these sought travel permits to Israel to observe Christmas this year. Israel granted a few hundred such passes, and it’s unclear how many of these Middle East Christians will return to Gaza.

Christians worldwide have been major supporters of Israel. Disregarding the religious impulse behind segments of that support, we should welcome them into the Big Tent of Zionism. And we should take note of the ongoing predations suffered by Middle East Christians and ensure that America embraces their cause as a corollary of support for Israel.

Share with your friends and colleagues the hellish reality of Middle East Christians, and seek opportunities for mutual support with Christian friends and organizations.