FLAME
X
Put text, tables or any other HTML contents here, as you would put in any other HTML page. ..... and more.
Skip to content
Home » New opportunity opens for the Palestinians: Will they seize peace and prosperity . . . or let it slip away again?
Media tell new lies about Israel excluding Palestinians from the Covid vaccineJacques Gautreaux2021-01-09T13:39:38-07:00 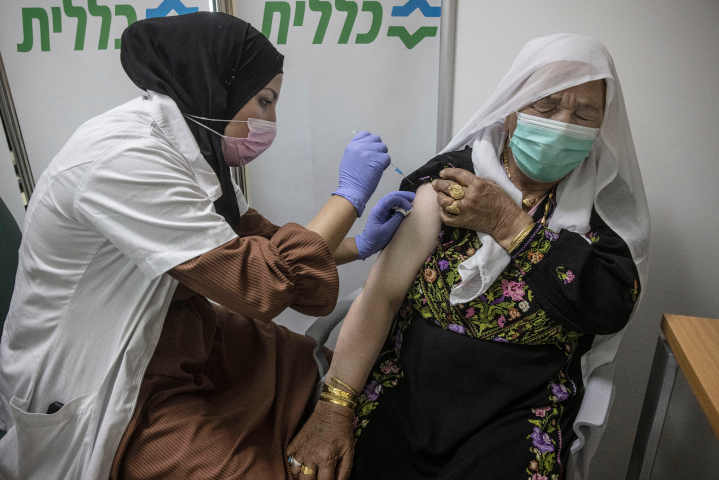 A Bedouin woman receives her Covid vaccine from an Arab healthcare worker in Beersheva, Israel. Israel has already inoculated more than a million older citizens, regardless of ethnicity. The Palestinian Authority is responsible for vaccinating its citizens in Judea and Samaria (the West Bank) and Gaza.

As you know, Israel’s extraordinary success in speedily vaccinating its population in recent days has been lauded globally. As of this writing, almost 13% of Israelis have already received the first Covid-19 vaccine, reaching well over a million people in just a couple of weeks.

While many in the media are looking at this as a public health achievement—and trying to learn lessons for other countries around the world—others are using it as one more excuse to bash the Jewish state.

Media outlets, including the Washington Post, NPR and the notoriously anti-Israel British paper The Guardian, have plastered spurious and arguably libelous headlines asserting that Israel is preventing Palestinians from being vaccinated. “Palestinians excluded from Israeli Covid vaccine rollout as jabs go to settlers” read The Guardian’s headline.

Unfortunately, due to the media’s obsession with proving Israel’s bad faith and the Palestinians’ victimhood, they cannot praise Israel without a back-handed snipe at how the Jewish state is allegedly harming its neighbors.

However, the truth of this matter amply demonstrates how the lie about withholding the Covid vaccine is simply another malicious media attack on Israel.

First, regardless of all the good that Israel does in the world, inevitably the haters step forward to paint Israel as evil. They cannot afford Israel receiving credit, because it will demolish the fallacious anti-Israel foundations they have built.

The Washington Post article on availability of the Covid vaccine complains about “disparities between Israel and the Palestinian populations it effectively controls”—implying that somehow Israel has a legal obligation to inoculate Palestinians outside its borders. Quite to the contrary, as Dr. Wilf points out: The Palestinian Authority is the governmental authority whose primary responsibility is to look after the health and welfare of the Palestinian people.

Indeed, the Oslo Accords—and more specifically, the Israeli-Palestinian Interim Agreement, signed by Israel and the Palestinians and witnessed by the international community—stipulates that “Powers and responsibilities in the sphere of Health in the West Bank and the Gaza Strip will be transferred to the Palestinian side.” Article 17:2 states that the Palestinian Authority (PA) will be in charge of any and all vaccination programs.

In theory, of course, Israel could offer the Palestinian Authority assistance with their vaccination program, but as the media clearly know, the PA angrily severed relations with Israel some months ago. Ironically, some of the media articles about this issue acknowledge that not only is the PA refusing any assistance from Israel, but it also has not made any request from Israel regarding Covid-19 vaccines.

In fact, the PA has attempted to acquire its own vaccines, independent of Israel. In December, Palestinian Authority senior health official Osama al-Najjar announced a deal made for the Russian coronavirus vaccine. “Four million doses of the Russian coronavirus vaccine are expected to arrive soon . . . by the end of the year or the start of 2021, we will begin to inoculate those most at risk,” al-Najjar said in an interview with Voice of Palestine Radio station. This simple but pertinent fact was ignored in many of the reports.

Let’s also be clear: Israel is in fact vaccinating Palestinians. Arab Palestinians who live in East Jerusalem enjoy the same welfare and health benefits as all Israeli citizens. They receive a high standard of healthcare through their Israeli health service provider. Most of these Palestinians who meet the criteria of the Israeli government for early vaccinations—over 60 years of age and/or underlying risk—would have received their Covid-19 vaccination, just as Jewish Israelis. This is obviously true for all Arab Israeli citizens of Israel, some of whom also identify as Palestinians.

Finally, the added element inserted by The Guardian about “jabs go to settlers” is a cheap and false attempt to delegitimize Israel’s rights in its ancient homeland of Judea and Samaria (aka the West Bank). “Settlers”, or more factually, Israeli citizens who live over the “Green Line” in the disputed territories, are full Israeli citizens. They contribute fully to Israeli society and pay taxes to the State of Israel, just as every other Israeli citizen. They live under Israeli rule, again as a result of the internationally supported Oslo Accords. Indeed, it would be strange and unfair not to inoculate a citizen because of where they live.

The Guardian is trying to insinuate that “settlers” are receiving the vaccine in place of the Palestinians. However, the above facts demonstrate that they are completely unrelated.

In essence, the media slandering Israel on this non-issue are rehashing historically anti-Semitic canards. In medieval times, Jews were often accused of being behind diseases like the Black Death, or at least taking advantage of these natural disasters. They were accused of poisoning the wells of others just to see others suffer. Jews have also been accused of caring only about themselves. These are anti-Semitic accusations, and mere modern repackaging will not change that fact.

The contrary is actually true. Israel has always extended its hand in peace, cooperation and fraternity, especially in the sphere of healthcare. Every year, even during times of tension, tens of thousands of Palestinians are allowed to seek treatment in Israeli hospitals and Israel trains Palestinian doctors in Israel, helping to improve their capacity to treat patients in the West Bank. In fact, despite similar false media reports nine months ago, Israel has supplied tons of Covid-related medical supplies to Palestinians in both the West Bank and Gaza.

It behooves supporters of Israel to call out such media as the Washington Post, The Guardian and NPR in letters to the editor and to their ombudsmen to protest what is at heart a dangerous anti-Semitic calumny.

I hope you will point out to friends, family, colleagues and your elected representatives that despite media distortions, it is the Palestinian Authority that is solely responsible for inoculating its people—not Israel—that the PA refuses any assistance from Israel, and that the PA has not requested any Covid vaccine from Israel.