FLAME
X
Put text, tables or any other HTML contents here, as you would put in any other HTML page. ..... and more.
Skip to content
Home » Despite vicious attacks on Israel by the media, the U.N. and Islamists, we continue to win!
Israel Haters Find a New Way to Attack: Block Police Training Exchanges between the U.S. and IsraelJacques Gautreaux2020-08-03T10:22:25-07:00 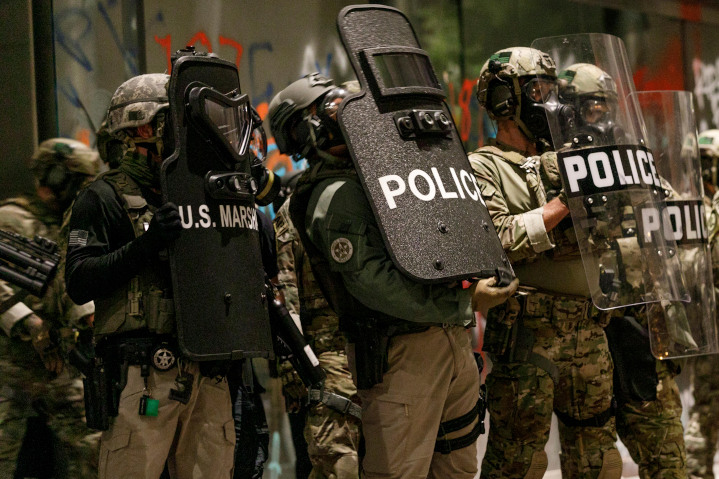 Police gather to quell a Black Lives Matter-led riot at the Portland federal court house. Black Lives Matter and anti-Israel groups promote a boycott of police training exchanges between the U.S. and Israel using false accusations against the Jewish state.

In the wake of increased attention on police brutality against black Americans, haters of Israel are using this issue to slander the Jewish state.

In what amounts to a clear case of anti-Semitism, those who seek to delegitimize and boycott Israel mount an emotional argument—which has no factual basis—against cultural-exchange training of American police officers by Israeli law enforcement.

Like many lies leveled against Israel, this one traveled all the way around the U.S. before truth had a chance to get dressed in the morning. Already, led by Black Lives Matter and other anti-Israel activists, several municipalities, including Durham, NC, have banned police exchanges like those with Israel.

The case for preventing U.S. law enforcement from participating in exchanges with Israeli police and intelligence officials is based on two false and logically flawed assertions by Israel’s enemies:

1) Israel is a “chronic human rights violator,” therefore any interaction with American police officers will cause them to violate human rights in the U.S.

The perpetrators of these lies are generally ultra-left activists who first and foremost oppose the existence of the Jewish state and consider it an occupier of Palestinian lands.

They are also “intersectionalists,”—who hold that any group or country (including white people, the U.S. and Israel) that oppresses any people of color, such as Middle East Arabs, is guilty of oppressing all downtrodden minorities, including American blacks and LGBTQIA people.

Thus, if you accept the lie that Israel oppresses Palestinians, you must accept that Israel helps oppress black and gay Americans. These ultra-lefts believe that racism is not only systemic, it’s globally systemic—if you’re any part of the system anywhere, you’re guilty. That’s before we even get to the question of policing.

Is Israel a “chronic human rights violator”? One of the primary sources used by the anti-Israel-police-training campaign is a report by the rabidly anti-Israel “human rights” organization, Amnesty International, which characterizes the U.S-Israel police training program as a “deadly exchange.”

However, they should carefully consider the source: According to NGO Monitor, Amnesty International “disproportionately singles out Israel for condemnation, focusing solely on the conflict with the Palestinians, misrepresenting the complexity of the conflict and ignoring more severe human rights violations” elsewhere.

Piling on to the Amnesty International foundation of lies, the UC Campaign for Palestinian Rights stated that the “Israeli military trains U.S. police in racist and repressive policing tactics, which systematically targets Black and Brown bodies.”

In reviewing the “evidence” mounted in Amnesty’s report on Israeli policing we see copious instances of one-sided accusations, mostly against the Israeli military, which are generally substantiated by anonymous “witnesses” and almost never allowed to be answered by Israel officials.

While Israel, like any Western democracy, can always refine its handling of criminals, terrorism and rioters, the country staunchly and passionately opposes human rights violations.

In short, there is zero hard evidence that Israel’s policies in policing or crowd control are in any way harsher than those of other rule-of-law democracies.

For any city council that cares about the truth, the Amnesty report is no more than a crude hatchet job. City council members should roundly condemn the report as an insult to their intelligence as well as to the Jewish state.

Does Israel teach oppressive forms of policing? A petition by academics and students at the University of California—and echoed by British actor Maxine Peake—asserted that the chokehold “used to murder George Floyd” in Minneapolis was “perfected” by Israeli forces.

This, too, was a lie. Amnesty International was forced to recant, admitting, “allegations that US police were taught tactics of ‘neck kneeling’ by Israeli secret services is not something we ever reported and the article in question has rightly been amended to acknowledge that.”

But in point of fact, such tactical policing techniques are not taught at all by Israeli police, secret service or intelligence officers to U.S. law enforcement.

According to Steven L. Pomerantz, former Assistant Director of the FBI and Director of the Homeland Security Program at the Jewish Institute for National Security of America (JINSA), which organizes such U.S.-Israel police exchanges, “there is no field training involved in either the conferences or trips and no training on holds or arrest mechanics.”

Most importantly, no group opposing the police exchanges has ever presented any direct evidence that Israeli law enforcement has ever taught or influenced brutality by American police.

Finally, what’s more, though U.S. police departments have also engaged in exchanges with countries such as Scotland and Germany, those countries are never the target of Black Lives Matter or other ultra-lefts. Only the Jewish state of Israel.

These accusations are so outrageous—resembling Nazi blood libels against Jews during the Holocaust—that the education secretary for Britain’s Labour party shadow cabinet, Rebecca Long-Bailey, was fired for sharing Maxine Peake’s false allegation about chokeholds, which the Labour leader Keir Starmer called an “anti-Semitic conspiracy theory.”

Mr. Startmer’s analysis is correct. Those who tell lies to demonize and delegitimize and who use a double standard to boycott Israel are guilty of anti-Semitism as defined by the U.S. State Department and 31 other member states of the International Holocaust Remembrance Alliance.

Perhaps members of city councils in the U.S. who ban such exchanges on the basis of these two lies should be subject to firing as well. Just for emphasis, let’s clarify: Defaming Israel is anti-Semitism. Anti-Semitism is racism.

I hope as you discuss the U.S.-Israel police-exchange boycott movement, you will point out to friends, family, colleagues and your elected representatives that the efforts of Black Lives Matter and others to demonize and delegitimize Israel are unfair and anti-Semitic. Accusations of Israeli systemic civil rights violations and the teaching of dangerous policing tactics are categorically false.