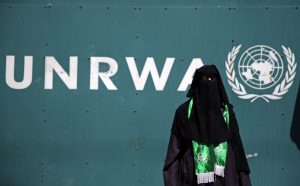 Like Barack Obama and his Secretary of State John Kerry, President Trump and his Middle East negotiators Jason Greenberg and Jared Kushner want badly to facilitate a peace deal between Israel and the Palestinians.

Indeed, Trump & Co. are planning imminently to unveil a peace plan intended to do just that. Unfortunately, the Palestinians have already announced that, sight unseen, they will reject it. Which makes the plan a non-starter, to say the least.

However, the administration and Congress have been taking a more constructive approach to an Israel-Palestinian peace—namely reducing funding to the Palestinians so long as they insist on obstructionism—fomenting violence and refusing to participate in peace negotiations.

Congress recently passed the Taylor Force Act, which cuts aid to the Palestinians so long as they pay salaries and pensions to convicted terrorists and those killed in the act of terrorism against Israelis and Americans. Smart.

In addition, the Trump administration had already announced its intention to cut some funding for the United Nations Relief and Welfare Agency (UNRWA), an organization originally dedicated to supporting some 700,000 Palestinians refugees from Israel’s War of Independence in 1948.

However, instead of resettling these refugees in other countries—as has been done with tens of millions of refugees since World War II—UNRWA is now supporting some 5.3 million descendants of those original refugees, only about 30,000 of whom are still alive.

Today the grandchildren and great grandchildren of the original Palestinian refugees are taught in UNRWA schools that their future lies in waging jihad and achieving martyrdom in order to conquer Israel.

In early January, President Trump tweeted, “we pay the Palestinians HUNDREDS OF MILLIONS OF DOLLARS a year and get no appreciation or respect.” He went on to say, “with the Palestinians no longer willing to talk peace,” and added, “why should we make any of these massive future payments?”

Indeed, why? But more importantly, Palestinian leaders are holding their people hostage for international handouts. They clearly have no motivation to make peace, nor obviously any inclination to build an economy to ease their massive unemployment. The corrupt leadership of the Palestinian Authority in Judea-Samaria (the West Bank) are becoming rich, while Hamas terrorist leaders in Gaza use every dollar of aid to wage war against Israel.

The solution for the Palestinians, of course, is to pursue peace, starting with revitalizing their economies in Judea-Samaria and in Gaza. The U.S. is willing to spend its foreign aid in this way—and Israel has given every indication it would follow suit at the first sign of normalization from the Palestinians.

In the meantime, it’s entirely appropriate for the United States to apply pressure on the Palestinians by removing significant amounts of the largesse they receive from U.S. funding of UNRWA.

That’s the subject of this week’s FLAME Hotline-featured article by commentator Ben-Dror Yemini. Under the banner of ” no perpetuating refugeeism,” Yemini proposes defunding UNRWA completely and turning over its responsibilities to other agencies and funding channels.

I hope you’ll forward this analysis to friends, family and fellow congregants. It will help them understand why cutting the flow of U.S. tax dollars to the Palestinians is the correct strategy, so long as the Arabs continue to wage war against Israel and refuse to enter into constructive dialogue toward rehabilitating their economies.

I hope you’ll also quickly review the P.S. immediately below, which describes FLAME’s hasbarah campaign—exposing UNRWA’s subversive role in Palestinian schools, paid for with U.S. taxpayer funds. I also hope you agree with and will support this message.

The more international donors have invested in Palestinian refugees—which is more than in any refugee group ever—the bigger the problem has become.

The details of US President Donald Trump’s new peace initiative don’t matter. We already know what the Palestinian reaction will be in advance. Those who rejected Bill Clinton’s proposal, who rejected Ehud Olmert’s proposal and who turned down Barack Obama and John Kerry’s proposal will turn down Trump’s new proposal as well.

The thing is there is no need to give up. In order to do some good to the Middle East, and in order to solve the Israeli-Palestinian conflict, there is a need to drain the conflict’s biggest swamp—the refugee problem.

For 70 years now, the international community has been helping the Palestinians, mainly those who are called—for some reason—refugees. Tens of millions of people became refugees following the dissolution of empires, wars, conflicts and the establishment of nation states. The United Nations created the International Refugee Organization (IRO) in 1947 to deal with the refugees of World War II.

Two years later, in late 1949, the organization’s name was changed to the United Nations High Commissioner for Refugees (UNHCR) to deal with all of the world’s refugees. Well, not exactly all of them. Because five days after the UNHCR’s establishment, another body was created to deal with the refugees of Palestine—the United Nations Relief and Works Agency for Palestine Refugees (UNRWA).

Why was there a need for another body? Because the UNHCR was supposed to deal with the integration and rehabilitation of refugees. The Arab states objected. They wanted a body which wouldn’t deal with integration or rehabilitation. They wanted a body that would work to perpetuate the problem. The definition of a refugee was different and broader, the budgets were much bigger, etc. And most importantly, the UNHCR dealt with 50 million refugees—and they aren’t refugees anymore. UNRWA, on the other hand, started off with 711,00, and today the number of registered refugees is 5.3 million. Everything has been reversed.

Since its establishment until today, from 1950 to 1918, the international community has allotted huge sums to UNRWA, which are worth today $40-45 billion. Considering the number of refugees and the size of the families (seven births per woman) when the problem was created, we are talking about $500,000 per family. Even if it were much less, only $250,000, it’s a huge sum.

Considering the purchasing power in the region’s countries, had the international community invested this huge capital in buying an apartment and a car and a farm for each family, a huge sum would have been left for investments in infrastructure, in industry, in welfare and in education. But 70 years of refugeeism are 70 years of perpetuating refugeeism.

To understand the paradox, I must add that in late 1950 the UN decided to create another body, the United Nations Korean reconstruction Agency (UNKRA), to handle the reconstruction of Korea, and mainly the refugees—1 to 3 million people who were penniless. This body operated until 1958. Its budget was $148 million (worth about $1.4 billion today). The money donations stopped and the “refugee problem,” like all the refugee problems from the previous decades, disappeared. The transit camps in Israel, which were mainly used to take in the refugees of the Jewish Nakba, operated for several years too, and most of them were emptied out by the late 1950s. The Palestinians are the only ones perpetuated as refugees.

The amazing paradox is that the more the international community invested in the refugees of Palestine—and it invested in them more than it invested in any other refugee in the world—the bigger the problem became. The Arab world stubbornly refused to rehabilitate the refugees (as detailed in Einat Wilf and Adi Schwartz’s book “The War for the Right of Return,” which was published this week). The stubbornness was only and exclusively about the perpetuation of refugeeism.

The Center for Near East Policy Research keeps exposing what is taking place behind the walls of UNRWA schools, and especially the brainwashing concerning the “right of return.” There is no such right. Tens of millions of people became refugees those years. None of them received a “right of return.” There were occasionally claims from expelled and uprooted people in Europe, who demanded the restitution of property and a return.

The European Court of Human Rights discussed the most important claim in this area. Refugees from the Turkish side of Greece, following the Turkish invasion in 1974, demanded a restitution of property. The situation has changed, the court ruled, and dismissed the claim.

There were other claims. Jews claimed property that was expropriated from them in Egypt. In practice, no one received compensation. But the refugees from Palestine, who were Arabs at the time and later became Palestinians, keep fostering just one fantasy: A return.

To somehow solve the Israeli-Palestinian conflict, there is a need for a different route based on the following principle: No more perpetuation of refugeeism, but rather a rehabilitation of refugees. There is no need to terminate UNRWA right away. And anyway, most of those registered by UNRWA are no longer in refugee camps or don’t even exist (only 177,000 of the 450,000 people registered in Lebanon are actually in Lebanon). Many others are Jordanian citizens or residents of the Palestinian Authority, and others have moved to Europe with hundreds of thousands of refugees from Syria. The remaining ones should be handled by the UNHCR.

Trump’s peace plan will fail just like all previous plans, but the American administration can change direction regarding the refugees. This is a historic opportunity, because some Arab states have changed their stance. And dissolving UNRWA, which was impossible in the past, is becoming more possible today. It’s good for the Palestinians, to wean them off their fantasies, it’s good for the Middle East, it’s good for Israel and it will only raise the chances of peace.