FLAME
X
Put text, tables or any other HTML contents here, as you would put in any other HTML page. ..... and more.
Skip to content
Home » Despite vicious attacks on Israel by the media, the U.N. and Islamists, we continue to win!
Humanitarian Aid to the Iranian People, Yes—But No Sanctions Relief for the AyatollahsJacques Gautreaux2020-04-06T10:42:17-07:00 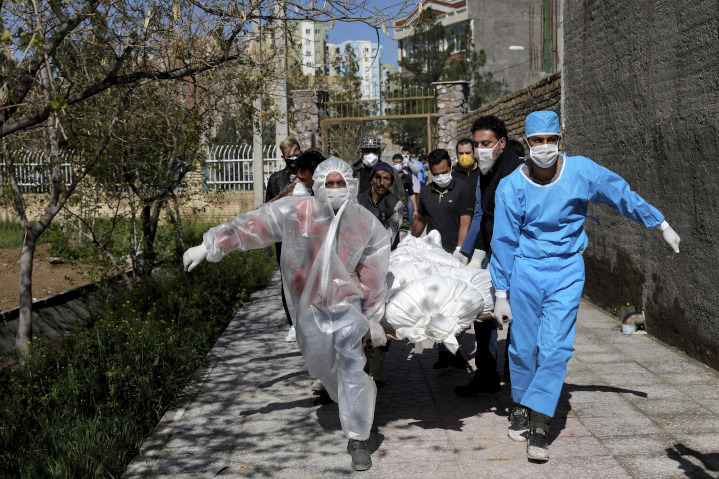 Iranians in protective clothing transport a coronavirus victim to a cemetery outside Tehran. While some American “progressive” politicians want to ease sanctions on the Islamic Republic for humanitarian purposes, there are currently no restrictions on Iran importing medical supplies.

Humanitarian Aid to the Iranian People, Yes—But No Sanctions Relief for the Ayatollahs

Despite the fact that Iran remains the greatest avowed enemy of the United States and one of the most corrupt regimes in the world, a group of 36 “progressive” U.S. legislators has urged Secretary of State Mike Pompeo to ease sanctions on Iran as a “humanitarian” gesture in the face of the Islamic Republic’s disastrous response to the coronavirus.

These elected officials—whose effort to increase funding to Iran’s dictatorial ayatollahs is enthusiastically backed by both Joe Biden and Bernie Sanders—ignore the fact that current U.S. sanctions do not in any way restrict shipment of humanitarian goods, such as medicine and medical equipment, to Iran.

A wiser approach to Iran at this point would be to ratchet up sanctions and military response to Iran’s continued belligerence and disregard of its increasingly disgruntled population.

Before discussing the egregious mistakes and duplicity Iran committed with regard to its outbreak of the coronavirus, it’s useful to understand why U.S. sanctions were put in place and why they remain commendable.

Iran is the greatest enemy of the United States. Iran makes no secret of its hate of the United States, frequently condemning and threatening the U.S. with military harm—and labeling America the Great Satan. To make its position clear, the Islamic Republic has also attacked and harassed U.S. naval vessels numerous times and just last year shot down a U.S. drone over international waters. What’s more, Iran recently attacked a major oil processing facility of our ally, Saudi Arabia.

Iran cheats on the nuclear deal and is still developing WMDs. Iran lied to Western negotiators while creating the Iran Nuclear Deal and violating parts of it upon its finalization. Iran has consistently barred the International Atomic Energy Commission from inspecting all its nuclear facilities as required by the deal, and Iranian leaders brag often about how close they are “breaking out” to create nuclear weapons. In addition, Iran has for years violated U.N. resolutions restricting development of intercontinental ballistic missiles and in 2017 became only the sixth country to possess them.

Iran’s human rights record is one of the worst in the world. It oppresses women, it persecutes (and kills) homosexuals, it imprisons political dissenters without due process, and last fall executed some 1,500 protesters who demonstrated peacefully against the ayatollahs’ mismanagement of the economy. Just last week we learned that Robert Levinson, a former FBI agent, died in captivity, denied a public trial for 13 years.

On top of Iran’s status as one of the world’s most aggressive and murderous actors on the global stage, its handling of the coronavirus was as dangerous as it was disingenuous.

Iran lied about coronavirus and became a vector for its spread in the Middle East. Iran withheld critical information about the outbreak of the coronavirus in its country and imprisoned whistleblowers. It allowed daily commercial flights in and out of China (and then to and from Lebanon) even as the disease raced through those countries. Only the deaths of many Iranian leaders forced the government to admit the crisis and belatedly take steps to halt it. As a consequence, some 16 Middle East nations claim their own outbreaks began in Iran. Even a group of Iranian academics a few days ago bravely issued a letter blaming the Iranian corona disaster on the incompetence of Supreme Leader Ayatollah Khamenei. Finally, 21 Nobel Laureates warned the U.N. that Iran’s paranoid secrecy has created a health catastrophe.

Iran lies about the source of coronavirus, blaming it on the U.S. In its own perverse form of racism, the Islamic Republic is actually telling its own people (and a skeptical world) that the U.S. created the coronavirus. One Iranian cartoonist, supported by Iran’s Ministry of Health, has launched a contest to promote U.S. responsibility for the plague, for which cartoonists from 68 countries have already submitted works.

Notwithstanding the many justifications for restraining Iran’s ambitions through tough sanctions, the U.S. has never imposed restrictions on Iran’s ability to acquire medical supplies. Current sanctions specifically exclude limitations on humanitarian imports. In short, Iran is as free as any country to purchase pharmaceuticals and medical equipment on the open market.

Unfortunately for the Iranian people, the dictators in Iran have other uses for their money. Ayatollah Khamenei is reported to have amassed a stash of $200 billion in assets that are under his personal control. The U.S. State Department last week reported that in July 2019, “one billion euros [from European nations] intended for medical supplies ‘disappeared’ and another $170 million allocated for medical goods were instead spent on tobacco.” Despite current sanctions, Iran continues to spend its scarce funds supporting colonial projects in Syria, Yemen, Iraq and Lebanon, as well as supporting terrorist groups like Hamas, Hizbollah and Palestinian Islamic Jihad.

We can only ask:

✔ if Iran faces no diplomatic or commercial obstacles to purchasing humanitarian supplies of drugs and medical equipment,

✔ if Iran has sufficient discretionary money to support jihadi militias in the Middle East,

✔ if Iran has a track record of lying about its coronavirus crisis, and

why on earth do leftist American and European politicians want to reduce sanctions and put more money in the hands of our number-one global enemy?

In fact, if we are to judge Iran by what it says about harming the United States and Israel, by how Iran cheats on international arms resolutions, and by the imperialist actions Iran takes all over the Middle East . . . the world community—and certainly the U.S.—would be smarter by tightening sanctions on the ayatollahs, not loosening them.

I urge you, in conversations with friends, family and colleagues, to emphasize that the Iranian people are suffering politically, as well as medically, due to the deliberate actions of their dictatorial rulers. What’s more, the people of Iran themselves surely realize that their problems begin and end with their jihad-obsessed government, not U.S.-imposed sanctions.

I hope you’ll also take a minute, while you have this material front and center, to visit FLAME’s lively new Facebook page and review the P.S. immediately below. It describes FLAME’s new hasbarah campaign—forcefully describing Israel’s critical strategic value to America.