FLAME
X
Put text, tables or any other HTML contents here, as you would put in any other HTML page. ..... and more.
Skip to content
Home » Despite vicious attacks on Israel by the media, the U.N. and Islamists, we continue to win!
Huge Opportunity for the U.S. to Ratchet Up Pressure on Iran: Renew the U.N. Arms EmbargoJacques Gautreaux2020-05-18T12:13:16-07:00 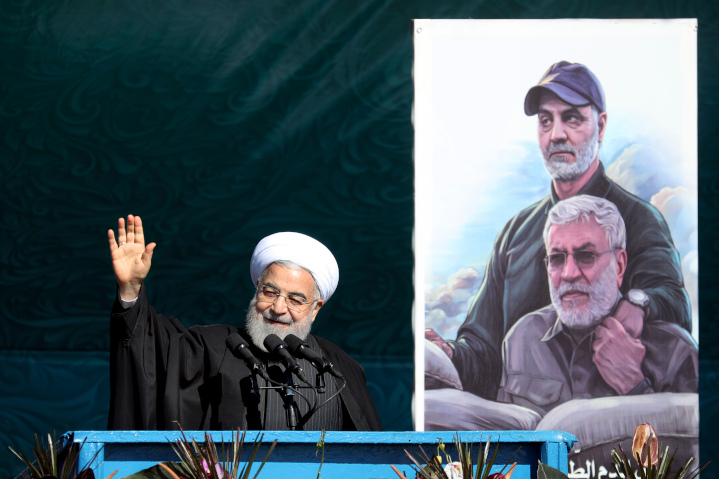 Iranian President Hassan Rouhani beams next to a photo of his henchman, Iranian Major General Qassem Soleimani and Iraqi Shi’ite militia commander Abu Mahdi al-Muhandis—both killed by a U.S. missile. Rouhani is happy a U.N. arms embargo will end in October, but the U.S. is determined to renew the embargo.

Huge Opportunity for the U.S. to Ratchet Up Pressure on Iran: Renew the U.N. Arms Embargo

The United States just announced that it will work to renew a 13-year-old arms embargo against Iran—set to expire this October—in the U.N. Security Council. But if the Security Council fails to renew the embargo, the U.S. will work independently to keep it in place.

Given the often-cozy relationship between the Islamic Republic and permanent Security Council members China and Russia, it’s likely that one or both will veto renewal of the U.N. Resolution.

However, Iran’s burgeoning belligerence in the Middle East makes it imperative that the U.S. refresh the arms embargo—as well as other pressures—even if we have to go it alone.

A short review of recent U.S.-Iran relations should convince you this is the right strategy.

When President Obama agreed to the Iran Nuclear Deal in 2015, he hoped it would ideally “strengthen the hand of those more moderate forces inside of Iran.”

In addition to the President, many pundits and politicians actually believed this would happen.

Mr. Obama envisioned that “we would see a situation in which Iran, seeing sanctions reduced, would start focusing on its economy, on training its people, on reentering the world community, [on] lessening its provocative activities in the region.”

Do you know anyone—Democrat or Republican—who believes since the Iran Deal was adopted that Iran has become one iota more moderate?

Has Iran reduced in any way its efforts to develop weapons of mass destruction, seize more power in Lebanon, Iraq, Gaza, Syria and Yemen, or to threaten Israel?

If anything, Iran has increased its meddling in the internal politics and military operations in a wide range of countries, most of which was led by Qassem Soleimani, who was assassinated by the U.S. in January 2020 at the Bagdad Airport:

• In Gaza, Iran continues to support Hamas, Palestinian Islamic Jihad, and the Popular Front for the Liberation of Palestine— all terrorist organizations, all enemies of Israel.

• Iran supports a range of Shi’ite militias in Iraq, which strongarm Iraq’s government to cooperate with Iran—always contrary to U.S. interests in the country.

• Lebanon’s Hezbollah terror group is largely funded and managed by Iran. Hezbollah maintains a standing army of 40,000 in Lebanon (violating another U.N. Security Council Resolution) and is active in militarizing both Lebanese and Syrian borders with Israel.

• Iran itself is a major ally of the Syria’s Assad government and uses this relationship freely to import a range of military equipment to within a few miles of Israel—forcing the Jewish state to continually conduct defensive bombing raids against these Iranian military facilities.

• Iran naval boats have frequently harassed U.S. Navy vessels as well as commercial ships in the Persian Gulf over the past year.

In short, there is zero evidence that the Iran Nuclear Deal has had a moderating effect on Iran’s mullah-ruled government. To the contrary, Iran behaves as aggressively as ever and continues to seize every opportunity to increase its imperialist grip in the Middle East.

Every indication is that an end to the U.N. arms embargo in October will only encourage Iran’s dangerous behavior.

Indeed, Iran’s President Hassan Rouhani confirms that negotiating a sunset for the U.N. arms embargo back in 2007 was a “ huge political success.” In case we have any doubts about why Rouhani likes this expiration date, just six months ago he confirmed that “When the embargo . . . is lifted next year, we can easily buy and sell weapons.”

Good news: Nearly 90% of the U.S. House of Representatives—387 members of 435—earlier this month called on Secretary of State Mike Pompeo to work with our allies to extend the U.N. arms embargo on Iran, which also includes travel restrictions on Iranians involved in the arms business.

Since Iran is unlikely to change its Middle East strategy, the U.S. should provide leadership in tightening pressure on the Islamic Republic—not only in renewing the arms embargo, but in further racheting up economic and diplomatic sanctions.

I hope that as you discuss Iran’s role in the Middle East—with friends, family, colleagues and in letters to the editor—you’ll emphasize Iran’s treachery across the Middle East and the need for the U.S. to oppose it with all necessary means.

I hope you’ll also take a minute, while you have this material front and center, to visit FLAME’s lively new Facebook page and review the P.S. immediately below. It describes FLAME’s new hasbarah campaign—which provides even more arguments for maintaining strong sanctions against our enemy, Iran.