FLAME
X
Put text, tables or any other HTML contents here, as you would put in any other HTML page. ..... and more.
Skip to content
Home » New opportunity opens for the Palestinians: Will they seize peace and prosperity . . . or let it slip away again?
How the European Union obstructs peace between Israel and the PalestiniansJacques Gautreaux2020-09-28T11:34:11-07:00 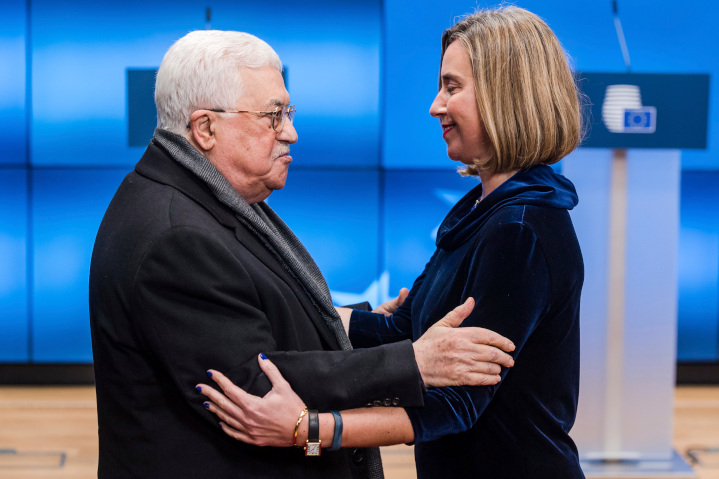 Palestinian President Mahmoud Abbas gets a hug from European Union Foreign Minister Federica Mogherini. EU efforts to make peace between Israel and the Palestinians include funding anti-Semitic Palestinian organizations and schoolbooks and censuring nations intending to locate embassies in Jerusalem.

How the European Union obstructs peace between Israel and the Palestinians

Europeans have a long and sordid history in the Middle East, from the Crusades to their colonization during the 20th century. Actions of European nations even to this day are guided by arrogance, economic self-interest and obsession with preserving their waning influence.

Europeans, during the last century, have been increasingly relegated from global Superpowers to bystanders in international diplomacy, while still clinging to economic vestiges in their former colonies, many of which are in the Middle East.

To maintain some sway, European powers have historically supported competing parties and interests in a region with many centuries-old conflicts. This, mixed with a long history of hatred and antagonism toward Jews, and especially Jewish sovereignty, has engendered double standards in dealing with the State of Israel.

What’s more, while claiming the mantel of peacemakers, the Europeans continue directly to fund regional initiatives that actually retard efforts toward peace.

Despite this interference, the Jewish state and its Arab neighbors are themselves demolishing previous barriers to friendship without help from European powers.

Even as relations between Israel and the Arabs warm, many European nations are still trapped in the failed Oslo paradigm—demanding suicidal Israeli concessions that often as not yield violent rejectionism from the Palestinians.

Ironically, European demands and treatment of Israel stand in direct opposition to their policies elsewhere around the world. While continuing to insist on Israeli compromises, Europeans have rarely pressured Palestinian leadership to give up its ultimate goal of eliminating the one and only Jewish state.

These double standards shown by Europeans toward the Jewish state continue to embolden Palestinian recalcitrance and violence.

A great part of Europe’s role in the so-called “peace process” is to provide funding and aid to the Palestinians, partly through the corrupt and authoritarian Palestinian Authority, but also through Palestinian civil organizations, many of whose aims are anything but peaceful

The European Union (EU) claims it only funds organizations and initiatives that promote its values. Reality, however, contradicts those assertions.

The EU’s Peacebuilding Initiative, a conduit for passing funds to Palestinian organizations and initiatives, continues to fund official Palestinian media channels, such as the Ma’an TV Network, which are openly anti-Semitic and glorify terrorism and murder of Israelis.

EU-funded organizations also act in opposition to official EU policy: According to NGO Monitor, numerous EU-funded NGOs have ties to the Popular Front for the Liberation of Palestine (PFLP) terrorist organization, and dozens of other EU-funded NGOs promote boycott campaigns against Israel.

While the EU falsely refers to Israel’s presence in Judea and Samaria as illegal under international law and stipulates that any agreement between Israel and the EU not include Israeli business or interests over the Green Line, this flatly contradicts its policies elsewhere.

One example of this contradiction: EU-Moroccan fisheries treaties extend into the territory of Moroccan-occupied Western Sahara, which are considered illegal by the international community.

Furthermore, the EU has consistently proposed trade deals with Turkish-occupied Northern Cyprus, which have only been rejected because of the Republic of Cyprus’ objection. However, the EU continues to fund infrastructure projects for Turkish settlers in the illegally occupied territory in the north of the island.

The EU also ignores breaches in Palestinian commitments not to use European funds to promote incitement, terrorism and corruption. In fact, one former European Union external affairs commissioner said he needed a full European parliamentary inquiry into Palestinian misbehavior “like a hole in the head”.

The EU and the European Parliament also periodically express shock at their own funding of Palestinian schoolbooks that have for decades promoted racism and incitement against Israel—but the EU rarely conditions its aid on an end to the education to hate and violence.

Serbia and Kosovo recently signed a momentous agreement to normalize relations with Israel, with a shared commitment by both nations to open their embassies in Jerusalem. The EU immediately voiced ” serious concern and regret” over these pledges, and implicitly threatened that such a move could imperil both Serbia’s and Kosovo’s ascension to EU membership.

Thus, the Europeans threaten to torpedo an expansion of their own union, with all of its positive economic and social implications, merely because it would necessitate a potential member state recognizing Jerusalem as Israel’s capital. Europe rarely, if ever, inserts itself into disagreements over whose capital should be recognized.

Why does the EU persist in undermining peace in the Middle East?

The first reason is demographic. As Europe’s Muslim and Arab populations continue to grow, reaching a quarter and even a third of the total populace in some areas, politicians who wish to be elected must ingratiate themselves to these populations by taking anti-Israel positions. It is simply a matter of math that these populations can swing a constituency, whereas no country in Europe has more than a couple percent of Jews.

Another factor is pure diplomatic and economic interests. In international forums, the Muslim and Arab blocs are dozens of nations strong, and to appease them at the cost of one Jewish state is a simple trade-off. Furthermore, around 60% of the world’s natural resources can be found in Muslim countries.

European nations and Europeans have a long and tragic history of anti-Semitism. Expulsions, inquisitions, pogroms, targeted restrictions—all culminating in the Holocaust—amply demonstrate the place that the Jew has held in European society. The Jewish state is demonized, delegitimized and has double standards applied against it by the Europeans in ways similar to those used for centuries against Jews of ancient, medieval and modern Europe.

These are just some of the multitude of factors that motivate unfair and destructive European policy toward Israel in general and the Israel-Palestinian conflict specifically.

These actions have not only perpetrated almost three decades of failed peace-making, but also encourage Palestinian maximalist demands and violent rejectionism.

I hope you will point out to friends, family, colleagues and your elected representatives that Israel and its neighbors succeed best when they sideline the Europeans. The EU’s double standards— negatively towards Israel and positively towards the Palestinians—are among the greatest obstacles to a resolution of the Israel-Palestinian conflict.