FLAME
X
Put text, tables or any other HTML contents here, as you would put in any other HTML page. ..... and more.
Skip to content
Home » New opportunity opens for the Palestinians: Will they seize peace and prosperity . . . or let it slip away again?
How the Biden Administration can improve ties to Israel and strengthen U.S. securityJacques Gautreaux2021-01-18T14:00:14-07:00 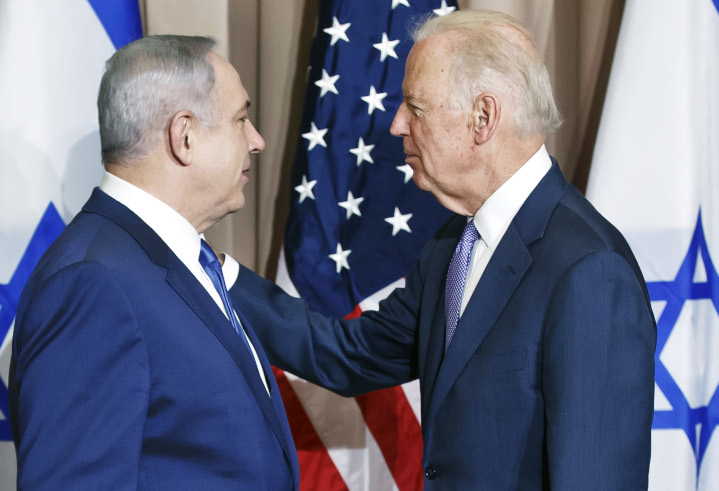 Long-time political friends, Prime Minister Benjamin Netanyahu and then Vice-President Joe Biden meet in Davos, Switzerland in 2016. The alliance between the U.S. and Israel is one of the world’s strongest and most mutually beneficial. President-elect Biden has the opportunity to leverage that relationship toward even greater U.S. security.

How the Biden Administration can improve ties to Israel and strengthen U.S. security

Israel is without dispute one of the United States’ strongest allies worldwide. Diplomatically, no other country has sided with the U.S. on critical issues at the United Nations more consistently than Israel. Militarily, Israel is one of the strongest nations on earth and is certainly our strongest ally in the Middle East.

What’s more, Israel and the United States share deeply held moral values based on Judeo-Christian roots. Both countries stand unalterably committed to democratic principles, rule of law and civil liberties for their citizens.

No wonder the friendship between Israel and the United States and strength of the alliance runs deep—in economic partnerships, strategic cooperation, military collaboration, humanitarian assistance and cultural ties.

Moreover, the Israel-U.S. relationship remains one supported by Americans at all levels and differing views and ideologies. For many decades, support for Israel has been a bipartisan issue, where both Democrats and Republicans have agreed on the importance of these close relations.

Despite a trend among the so-called “progressive” wing of Mr. Biden’s party to regard Israel with disfavor, nearly 70% of Americans support the Jewish state (compared to the Palestinian Authority). Indeed, President-elect Joe Biden himself has long been a staunch supporter of Israel.

As Mr. Biden assumes the presidency, his administration has the opportunity to build on the powerful asset that Israel represents globally and especially in the Middle East. Above all, Mr. Biden should protect advances made in the U.S.-Israel relationship and the region over past four years.

But powerful diplomatic relationships thrive only when there are no surprises between allies, and their disagreements need to be resolved behind the scenes—not in public. For example, many of the negotiations for the 2015 Joint Comprehensive Plan of Action (JCPOA), the “Iran nuclear deal,” were held without the input and knowledge of Israel, a country directly threatened by a potential Iranian nuclear weapon. If President Biden wishes to negotiate America’s reentry into the JCPOA, his administration should also respect Israel’s pressing concerns.

After all, for the U.S., a nuclear Iran is a strategic threat, for the Jewish state it is existential. Israel is our friend, Iran is our mutual enemy.

These are all part of Israel’s vital interests and reflect reality rather than ideology. None of these actions undertaken by the last administration resulted in the conflict that many critics predicted. Clearly, the fear of violence by the Palestinians and their allies is no reason to refrain from doing the right thing.

In addition, the U.S. should not squander the recent momentous normalization agreements between Israel and Arab nations, known as the “Abraham Accords.” These agreements have been and continue to be a tremendous achievement that makes the region more peaceful and opens the doors for more Arab nations to join in and create even greater harmony and stability.

While in over seven decades, only two Arab nations made an official, yet cold, peace with Israel, we have now witnessed four peace agreements between Israel and the UAE, Bahrain, Sudan and Morocco in just a matter of months. Furthermore, with Israeli flights allowed to fly over Saudi Arabian territory and Prime Minister Benjamin Netanyahu visiting Oman, the Jewish state and the pragmatic Arab world are closer than ever.

President Biden would serve U.S. interests for peace and stability in the Middle East by seeking more such agreements. A more peaceful Middle East is not just good for Israel, it is also critical for the U.S. in terms of security, diplomacy and economy.

On the Palestinian issue, we’ve seen recently that it’s possible to take a firm, realistic stance with few adverse effects. Over the decades, the Palestinian leadership has rejected countless peace offers—including those of the Obama administration—and most recently the “From Peace to Prosperity” plan launched in January 2020.

Above all, the Palestinians should no longer be rewarded or incentivized for their recalcitrance and rejectionism as other U.S. administrations have done.

Until the Palestinians agree to end incitement, regular payments to terrorists and their rejection of the State of Israel as the national homeland of the Jewish people, the U.S. would be wise to keep the Palestinians at arm’s length. Any funding and assistance the U.S. seeks to give the Palestinians, either through the Palestinian Authority or through UNRWA, should be given with strong conditions that it not be used for terror, incitement or to teach descendants of Palestinian refugees the lie that millions of their numbers will “return” to Israel.

Another way to strengthen the U.S.-Israel bond is to fight anti-Semitism—and its variant, anti-Zionism—more aggressively here and abroad. The U.S. Government should officially adopt the IHRA Definition of Antisemitism, adopted by many dozens of nations and agencies around the world. It defines certain areas where demonization and delegitimization of Israel is actually anti-Semitic. It should also ensure that BDS is thwarted, especially on campuses of higher education, legally proscribe mass boycotts against a friendly country and work to educate about why Israel is a friend and ally, and a bastion of human rights in a region where few can be found.

The future looks bright, and the path is clear for an American administration that wants to sustain and nurture stronger ties between Israel and the U.S.

I hope that you’ll point out to friends, family, and colleagues—as well as to the President and your elected representatives—that the U.S.-Israel alliance is priceless for both countries. Israel’s security directly supports U.S. security. Our shared intelligence, defense innovation and sharing of information have saved countless American lives and bolstered U.S. interests. Pro-Israel activists of every affiliation should help the next administration and fellow Americans understand that the U.S.-Israel alliance deserves vigilant protection and sustenance.