FLAME
X
Put text, tables or any other HTML contents here, as you would put in any other HTML page. ..... and more.
Skip to content
Home » New opportunity opens for the Palestinians: Will they seize peace and prosperity . . . or let it slip away again?
How should recent Arab-Israeli normalization agreements guide U.S. Middle East peace strategies?Jacques Gautreaux2020-12-20T20:18:27-07:00 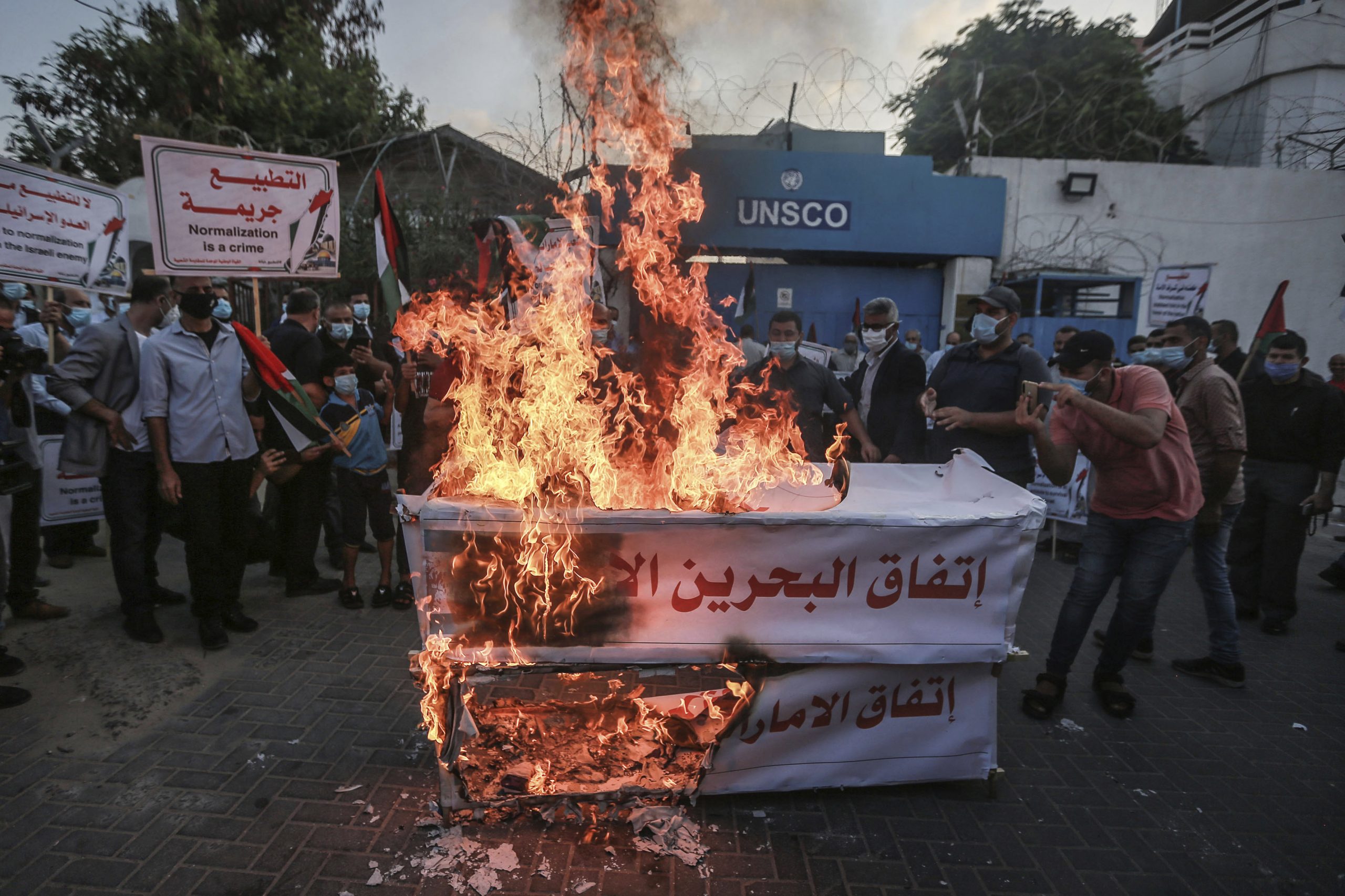 Palestinians in Gaza protest peace between Arab states and Israel in front of the office of the UN Special Coordinator for the Middle East Peace Process (UNSCO). Signs say “UAE and Bahrain agreement is occupation” and “Normalization is betrayal.” Palestinians are among the most vocal opponents of warming relations between Arabs and Jews.

Our ability to recognize and understand historical trends in real time gives us greater power to harness the powerful current of events. By grasping the meaning of profound changes in the Middle East, the Biden administration will be able to create more favorable outcomes and avoid wasted time and political capital.

Such is the opportunity before us as Arab nations suddenly begin to embrace normalization with Israel. This momentous shift in behavior should make us rethink our assumptions about how—and with whom—we can most readily achieve peace in the region.

Above all, Arab-Israeli normalization initiatives shine light on the most promising paths to peace—none of which favors the U.S. rushing to the rejectionist Palestinian cause.

It should also disabuse would-be peacemakers of the notion that Israel is unwilling to or incapable of making peace with Arabs who wish it.

For decades, the State of Israel found itself surrounded by implacable enemies, many who sought its destruction. The Arab world had attacked the Jewish State at its reestablishment in 1948, and several other times, including in 1956, 1967 and 1973.

Preceding its military attacks, the Arab League, the regional organization of 22 Arab states, had initiated an economic boycott of the Jewish community in Mandatory Palestine beginning in 1945 in order to throttle it financially.

This violent rejectionism in the Arab world toward Jewish sovereignty continued for many years, but recent normalization agreements with the UAE, Bahrain, Sudan and Morocco mean that today six member states of the Arab League have full relations with Israel, with others reportedly on their way.

How can the U.S. take advantage of this sea change in attitudes and behavior to advance peace in the region, as well as its own interests?

First, many indicators tell us that the Arab-Israeli conflict is now largely past. In 2002, the Arab League endorsed the Arab Peace Initiative, which offered an end to the conflict and full normalization with Israel in return for major concessions to the Palestinians. The unquestioned “truth” that no Arab country would normalize relations with Israel before an Israel-Palestinian peace deal was signed has been broken. While still giving lip service to the Arab initiative, each country that normalizes relations in essence tears asunder the central premise of the document and undermines Arab opposition to Israel.

Most tellingly, the place where the “Three Nos”—no peace with Israel, no recognition of Israel, no negotiations with it—of the infamous Khartoum Resolution of 1967 was agreed to has now become the nation of “Three Yeses.” Sudan now has peace with Israel, recognizes and has negotiated a deal with it. The symbolic heart of the conflict has been breached in the very place it was most forcefully pronounced.

Second, it’s clear from the recent normalization agreements that these are more than formal documents. The growing partnerships between Israel and the UAE and Bahrain in a number of fields is testament to the warmth of these relations. Israelis are traveling in the thousands to Dubai, and an Emirati sheikh has just bought half of Beitar Jerusalem, a prominent soccer team in Israel’s capital. In Morocco, Jewish history and culture will soon be part of the school curriculum—unprecedented in the region.

Even in countries that have yet to normalize relations with Israel, rejectionism and hatred for Israel is diminishing. According to experts, there has been a notable reduction in anti-Semitic and anti-Zionist content in Saudi Arabian textbooks.

Third, this peace is due to much more than just a common foe—the Islamic Republic of Iran—that is bringing these nations together. There is a growing recognition that Jews and Arabs can chart a new course forward together, without being held back by the obstructionism of the Palestinians. For too long, Arab nations were held hostage to the whims of the Palestinian leaders who would dictate relations in the region and use them as a bargaining chip to be used against Israel.

The Arab world has now joined Israel in wearying of its anchor to a conflict that has little chance of being solved soon, despite repeated Israeli, U.S. and European attempts.

Finally, the blessed end of the regional conflict shows it was never about Jews and Arabs, or Islam, but about the Palestinians’ maximalist intentions to expunge Jewish sovereignty from the region. More and more Arabs are now fed up with this rejectionism and are deciding it will no longer impact their decision-making.

Dhahi Khalfan Tamim, Dubai’s deputy head of police and general security, wrote in September urging Arab nations to ignore Ramallah’s criticism of the UAE’s normalization process with Israel. “Rid yourselves of this notion that you don’t build relations with Israel except at the command of Mahmoud Abbas,” Tamim wrote on Twitter.

Indeed, even with peace breaking out all around them, the Palestinians—both the Palestinian Authority in Judea-Samaria (aka the West Bank) and Hamas in Gaza—continue to reject peace negotiations with Israel. Nor have either of these fierce enemies moved an inch in their positions, but rather still cling to their determination to defeat the Jewish state.

Israel and the Arab world are formulating a brighter future for the region together. What was taboo has now been broken. That can only be a good thing for all the peoples of the region, whether Arab or Jew. The belief that the region pivots on the Israel-Palestinian conflict—or that Israel doesn’t want peace or can’t bring itself to make peace with willing Arabs—has been debunked once and for all.

I hope you’ll point out to friends, family, colleagues and your elected representatives that the wider conflict between Israel and the Arab world is now ending—one agreement at a time. The Palestinians are being left behind by their leaders, who remain implacably opposed to the Jewish state, even while the Arab world leaves them behind in a clamor to normalize relations with Israel.