FLAME
X
Put text, tables or any other HTML contents here, as you would put in any other HTML page. ..... and more.
Skip to content
Home » New opportunity opens for the Palestinians: Will they seize peace and prosperity . . . or let it slip away again?
How humanitarian Israel strives to be a “light unto the nations”—even with its enemiesJacques Gautreaux2020-11-02T10:29:15-07:00 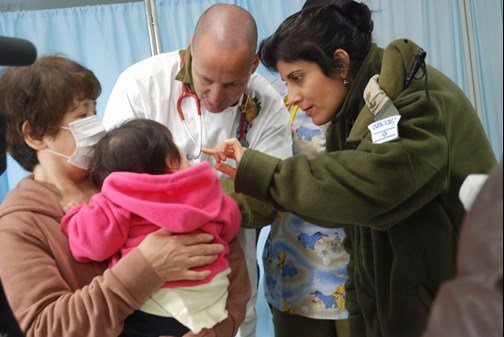 Israeli Defense Forces treated hundreds of victims of an earthquake and tsunami in Japan in 2011—one of many global humanitarian missions mounted by the IDF, the Israeli Foreign Affairs Ministry and independent Israeli non-governmental organizations. (Photo: IDF)

While enemies of Israel defame and attempt to delegitimize the Jewish State as a nation that ignores humanitarian needs and exhibits little compassion, the opposite is actually true.

This passage calls on the Jewish nation to help not only itself, but other nations, unselfishly, as a condition for being restored to their homeland.

Little wonder that Israel is often one of the first nations to send humanitarian supplies and medical and construction volunteers to global disaster areas, such as when a massive earthquake hit Haiti in 2010. Before it even received official permission to land, Israeli first responders flew to the beleaguered nation and had a fully functional field hospital up and running in a devastated Port-au-Prince a full week before the American contingent.

Israel also aided New Orleans after Hurricane Katrina in 2004, responded after the 2004 tsunami in Indonesia, flew supplies and shelter to Kashmir after its 2005 earthquake, medical relief to storm victims in the Philippines in 2009 and set up medical facilities in Japan after devastating earthquakes in 2011.

But what’s most remarkable about Israel’s outreach to people in need is that the beneficiaries of its disaster relief are often arch enemies of the Jewish state.

In fact, Palestinian Chief Negotiator and Secretary General of the Executive Committee of the PLO Saeb Erekat currently lies severely ill with coronavirus in an Israeli hospital receiving VIP treatment —better than the average Israelis receives. This is the same person who has made a career out of expressing support for violence terrorists, whitewashing terror organizations, and supporting violence, bloodshed and threats of violence, as well as rewriting history and perpetuating libels against Israel, including support for the anti-Semitic BDS movement.

Ironically, the very man who leads efforts calling on others to boycott Israeli companies and institutions chose Israel to save his life.

Erekat is among several high-level Palestinians to be treated by Israel, even as they espoused hatred, violence and terror against the Jewish state.

In 2014, the daughter of arch-terrorist and Hamas leader Ismail Haniyeh was treated in a hospital in Tel Aviv, only two months after the terrorist organization launched a barrage of rockets in the hospital’s environs, and even while her father led an organization dedicated to the brutal destruction of Israel and according to its covenant, seeks the elimination of all Jews everywhere.

Nations with which Israel remains in an official state of war still receive the outstretched hand of the Jewish state in their time of need.

A few months ago, when there was a massive explosion in the port of Beirut—killing 204 people, injuring 6,500, and leaving some 300,000 people homeless—Israel immediately offered to treat the injured.

Prime Minister Benjamin Netanyahu said: “We are ready to send humanitarian assistance to Lebanon as human beings to human beings.” Even though the official response was rebuffed by the Lebanese authorities, some Israeli doctors offered to fly to third countries to set up ad-hoc centers there, while others offered to send emergency medicine parcels to Beirut without any Israeli identifying marks.

During the ongoing Syrian Civil War, hundreds of thousands have been killed, with millions fleeing or being made homeless. Despite the fact that Israel and Syria have been in a state of war for more than seventy years—and according to international law countries can close their borders against their sworn enemy—Israel decided to provide humanitarian aid to the Syrian people in their time of need. The IDF formed “Operation Good Neighbor” to help their Syrian neighbors across the border.

Originally, when Syrians came to the border to seek medical attention they were immediately brought to Israeli hospitals. However, Israel decided instead to set up a field hospital on the border where it treated people from all sides by the thousands, regardless of affiliation in the conflict. As one Syrian women refugee told Globes newspaper in 2018: “I feel more comfortable coming to a hospital in Israel than a clinic in Syria. I don’t tell anyone that I was in Israel. Only to my family do I talk about Israel and how well we’re treated.”

In 2017, after an earthquake on the border between Iran and Iraq, two countries with which Israel does not have diplomatic relations; Israel offered help to both.

The Jewish state has also welcomed and assisted civilians and refugees from a host of other countries, some of which Israel does not have any formal relations with, including Lebanon, Egypt, Iran, Vietnam, Bosnia, Kosovo, Eritrea and Sudan.

It is not just at the government level either: Many Israeli NGOs regularly assist those most in need of Israel’s advanced assistance and medicine, regardless of their nationality, religion or background.

Since 1995, Israeli doctors acting through Save a Child’s Heart have been giving kids from around the world, including from the Palestinian Authority (PA), Iraq, Jordan and other Arab nations free life-saving heart operations. Since the organization first started, 2,300 children have been treated, and almost half are from the PA, Jordan and Iraq.

All of this is a result of Israel’s heightened sense of humanitarian awareness and responsibility. Israel’s first prime minister, David Ben-Gurion, famously said, “By these will the State be judged: By the moral character it imparts to its citizens; by the human values determining its inner and outward relations; and by its fidelity, in thought and act, to the supreme behest: ‘And you shall love your neighbor as yourself.’”

I hope you will mention to friends, family, colleagues—and your elected representatives—that this long-standing biblical imperative to act as a “light unto the nations” has guided the Jewish people for millennia. Regardless of their situation, Jews have held tightly to this dictum, and the state of Israel has exemplified this spirit—humbly using its resources and skills to help others, even those dedicated to Israel’s destruction—in their times of greatest need.