FLAME
X
Put text, tables or any other HTML contents here, as you would put in any other HTML page. ..... and more.
Skip to content
Home » Despite vicious attacks on Israel by the media, the U.N. and Islamists, we continue to win!
False ICC Accusations Against the U.S. and Israel Underscore the Value of Our AllianceJacques Gautreaux2020-06-15T13:20:09-07:00 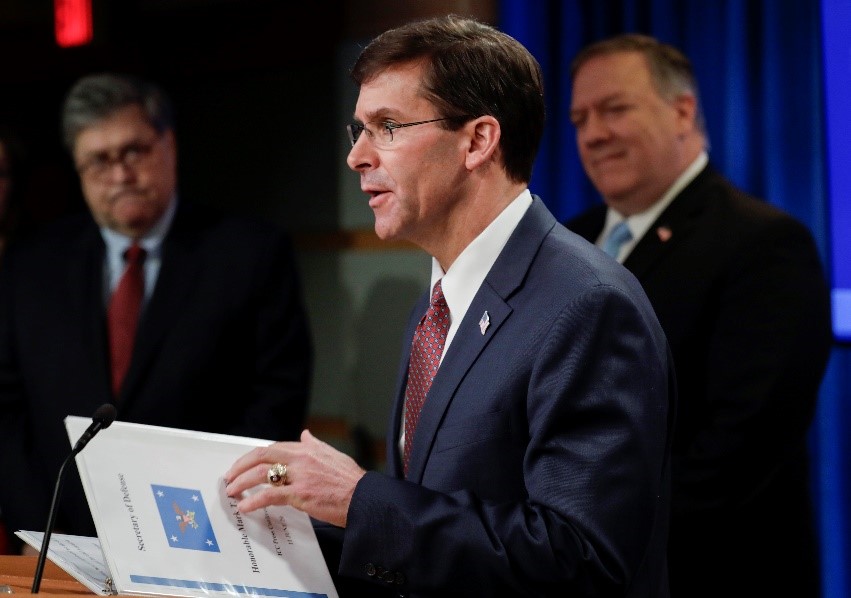 U.S. Secretary of Defense Mark Esper, flanked by Attorney General William Barr (l) and Secretary of State Mike Pompeo (r), during a briefing on the U.S. decision to enact economic and travel restrictions on members of the International Criminal Court for their unauthorized investigation of U.S. military and intelligence operations in Afghanistan.

False ICC Accusations Against the U.S. and Israel Underscore the Value of Our Alliance

In response to a demand by some 300 U.S. Representatives and Senators to stop “politically motivated investigations” by the International Criminal Court (ICC) into the U.S. and Israel, the U.S. State Department announced economic and travel restrictions on officers of the Hague-based court.

The bipartisan group of U.S. elected officials noted that the court should only be “a last resort for the prosecution of the most serious international crimes.”

Once again, we see the interests of the U.S. and Israel align uniquely—this time because the ICC chooses to function not as an enforcer of international law, but as a political tool of our common enemies.

These two recent, unrelated ICC actions only reinforce the wisdom—indeed, the necessity—of the U.S. and Israel pursuing justice independently of international bodies like the U.N. and ICC . . . and of continuing to support each other as steadfast allies.

At the heart of the conflict with the International Criminal Court is its determination to pursue political agendas far outside its charter as a legal body. In fact, in both these cases, the ICC is ignoring the fundamentals of fairness—equal treatment and consistent application of the law.

Let’s start with the essential purpose of the ICC, which was set up by the U.N. under the Rome Statute in 2002: To prosecute a) the most heinous international crimes b) in the absence of a capable national court.

As we’ll see, neither the actions of the U.S. or Israel under consideration by the ICC even remotely rise to the level of “heinous.” But more importantly, few countries on earth have internal justice systems as rigorous than those of Israel or the United States.

In addition, neither the U.S. nor Israel are members of the ICC, so technically neither is subject to ICC authority. In other words, since the court completely lacks legal jurisdiction in these matters, it’s only purpose can be to politically smear the U.S. and Israel.

Thus, according to the ICC’s own core mission, both prosecutions are extra-judicial and inappropriate—not only a misuse of time and money, but essentially unjust.

But the travesty continues: In order to justify these politically prosecutions, the ICC has to ignore actual international law.

The case against Israel has been mounted by the Palestinians on two charges: 1) Jews are creating “illegal” communities in Judea-Samaria (aka the West Bank) and eastern Jerusalem—both technically disputed territories; and 2) Israel used disproportionate force in 2018 and 2019 in defending its borders as Gazan Palestinians tried to breach them.

In order to justify these charges, however, the ICC’s chief prosecutor Fatou Bensouda has made the ruling that “Palestine” is a state—which it is not under international law.

At least seven nations—all signatories to the Rome Statute—including Australia, Austria, Brazil, Czech Republic, Germany, Hungary and Uganda, have filed friend-of-the-court briefs advising Bensouda that “Palestine” is not a state.

In an even greater affront to fairness, the charges the ICC is considering against Israel make no mention of Arab terrorism or Gaza rocket attacks against Israeli civilians. Unsurprisingly, the ICC has never formally investigated any war crimes by Palestinians, including financial support of suicide bombing or location of missile launchers and Hamas military headquarters in schools and hospitals.

ICC accusations against the United States for war crimes include “acts of torture, cruel treatment, outrages upon personal dignity, rape and sexual violence” in Afghanistan (as well as related clandestine activities at CIA facilities in Poland, Romania and Lithuania).

We should note, however: Afghanistan has objected to the ICC’s inquiry, as it is conducting its own investigation, and neither Poland, Romania or Lithuania are parties to the ICC action.

Just as bizarre from a judicial standpoint is the fact the court is attempting to try Israel for a “crime” for which the court has never indicted any other country —neither Turkey for its illegal 1974 conquest of part of Cypress, nor Russia for its 2014 invasion and annexation of Crimea.

Both Turkey and Russia violently seized territories that were undisputedly parts of sovereign nations: If any countries deserve prosecution by the ICC, these two do.

On the other hand, territories in question in the Holy Land were never under the sovereignty of the Palestinians. Rather, these lands west of the Jordan River were ceded to Israel in 1920 by the San Remo Accord and later ratified by the League of Nations and the United Nations.

Jordan, which briefly seized control of Judea-Samaria, was thrown out by Israel in 1967, and Jordan released its claim to these lands to Israel in 1994. In fact, Israel has greater claim to this territory than any nation on earth. The Palestinians have never had sovereignty over any land.

Eugene Kontorovich, director of International Law at the Jerusalem-based Kohelet Policy Forum and director of the Center for International Law in the Middle East at George Mason University noted that Bensouda “has come to the absurd decision that a non-country can sue a non-member of the ICC for a non-crime that nobody has ever been prosecuted for.”

Finally, the ICC has shown indisputable political bias. When the Rome Statute was originally drafted, the Arab League pressured negotiators to criminalize Israel for allowing its own civilians to move into Judea-Samaria. The Statute’s definition of international aggression also compromises national rights to self-defense.

No wonder most U.N. Security Council permanent members (including the United States) and emerging global powers (like Israel) declined to sign the Rome Statute and become members of the International Criminal Court.

What’s worse, according to a report by the Jerusalem Center for Public Affairs (JCPA), the ICC’s case against the U.S. originated by two nonprofit advocacy groups—the International Federation of Human Rights and the Center for Constitutional Rights, both related to the Palestinian NGOs that brought the complaint against Israel to the ICC.

As shown in the JCPA report, the Palestinian NGOs “maintain strong ties to the designated terror organizations Hamas and the Popular Front for the Liberation of Palestine.” These organizations are certainly not friends of the U.S. or Israel.

I hope as you discuss recent U.S. sanctions against the ICC and the court’s upcoming actions against the U.S. and Israel, you’ll point out that the International Criminal Court is really no court at all. Rather it’s a political action agency of the U.N., whose goal is to defame countries it views as enemies, using “lawfare” based on false charges.