FLAME
X
Put text, tables or any other HTML contents here, as you would put in any other HTML page. ..... and more.
Skip to content
Home » New opportunity opens for the Palestinians: Will they seize peace and prosperity . . . or let it slip away again?
False assumptions prevent resolution of the Israel-Palestinian conflictJacques Gautreaux2020-10-05T10:56:30-07:00 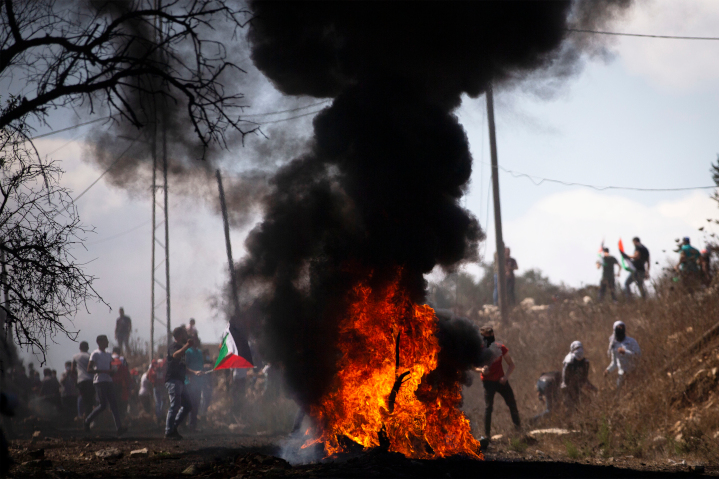 Palestinians demonstrate near Nablus in Judea (aka West Bank), opposing Jewish settlement in the Holy Land. While Palestinian leaders claim they want land for peace, in more than 72 years they’ve refused many offers. It appears their true goal is to remove Jews entirely from the region.

The absolute certainty of Kerry’s view—which has been shared for decades by many U.S. politicians and most Middle East diplomats and pundits—stands in stark contrast to the reality that has been bubbling beneath the surface for some time. With Kerry’s theory now disproven, it is clear we have been fed many other false paradigms and slogans about the Israel-Palestinian conflict.

If the U.S., Israel, the Palestinians, the Europeans and the Arabs wish to resolve this conflict peacefully, it will pay to revisit and recalibrate many assumptions. Let’s start with some of the most egregiously inaccurate claims and the real facts behind them.

False Assumption #1: The primary Palestinian goal is self-determination and a state of their own.

This is the focal point of so much deceptive thinking about the conflict. Ironically, it does not pass even the simplest historical scrutiny. The Palestinians, or the Arabs of Mandatory of Palestine, were offered a state on several occasions over the past century, beginning in 1937 when the Peel Commission offered to create an Arab State on over four fifths of the territory of Mandatory Palestine, leaving the Jewish state with a tiny sliver of the coast around Haifa.

The Arabs were later offered a state in 1947, 1967, 2000, 2001 and most recently, in 2008, when then-Prime Minister Ehud Olmert offered 100% of Judea and Samaria and Gaza, with some minor land swaps. Each time the Palestinian leadership said no, because it would have necessitated recognizing Jewish national rights.

In fact, all evidence indicates that the Palestinian leadership nurtures an obsession with destroying Israel more than they seek a state of their own, and for this reason they are unable to accept a peace treaty that requires they give up this goal.

False Assumption #2: The Palestinian issue is the crux of instability in the Middle East

This myth is easy for many in the West to digest because of the massively disproportionate attention the Israel-Palestinian conflict receives in mainstream media. However, the facts simply do not tally with the theory. The Shiite-Sunni rivalry has been raging for centuries, with millions of casualties, and still remains a foundational point of so many regional conflicts, as in Yemen, Lebanon and Iraq. In fact, since the establishment of the State of Israel in 1948, more than 13 million Muslims have been killed in regional conflicts—90% by other Muslims—and fewer than one per cent in the context of the wider Israel-Arab conflict.

The circumstances that created the Arab Spring—namely that the people of this region are oppressed by their autocratic governments and suffer crushing poverty—has no relationship to the Israeli-Palestinian conflict. In fact, tension in the Holy Land has long been used to distract the region’s people from their daily political and economic plight.

In fact, historical evidence over the last century, even up until this last month, indicates that the Israel-Palestinian conflict is low on the list of causes of discontent in the Middle East, and serves to swerve attention from the region’s many ills.

False Assumption #3: The conflict is territorial and not ideological.

In 2008, when PM Olmert offered Palestinian leader Mahmoud Abbas 100% of the territory, half of Jerusalem, the holy basin and a solution for refugees, the Palestinian leader balked at the offer—because he would have to sign an end to all claims and conflict clauses. Abbas has further stated on numerous occasions that he will never recognize the Jewish people’s right to self-determination, and has refused to enter negotiations because of this one simple demand.

Moreover, despite repeated UN and Palestinian protestations, as well as volumes of media criticism, Jewish settlements have never been an impediment to an agreement, because they sit on less than 2% of all Judea and Samaria. Even when Prime Minister Benjamin Netanyahu placed a complete moratorium on building in settlements in 2009—specifically to demonstrate that this is indeed a “red herring” issue—Abbas still refused to enter negotiations, thus proving the point.

In fact, borders and territorial issues have never been a sticking point during any negotiations between Israel and the Palestinian Authority—rather it’s the Palestinian obsession with expelling Jews from “Muslim land” that sustains the conflict.

False Assumption #4: The Palestinian leadership is ready for negotiations and compromise.

Despite Prime Minister Benjamin Netanyahu’s frequent declarations that he is ready for negotiations at any time in any place, and that all issues remain on the table, Palestinian leaders have not even responded to this offer. Regardless of whether there is a more or less friendly incumbent in the White House—or in the Israeli parliament—the Palestinians have retained their all-or-nothing position.

In fact, there is absolutely no evidence that the current Palestinian leadership has any interest in or willingness to end the conflict—they have refused all local and international attempts to bring them to the negotiating table.

False Assumption #5: Israel’s presence in Judea and Samaria—the so-called “occupation”—is the cause of the conflict.

For this reasoning to be accurate, it must follow that before 1967, when Israel first liberated Judea and Samaria and started to rebuild communities in the Jewish people’s historic homeland, there was no conflict. We know from history that this is blatantly false. The conflict began at the beginning of the 20th century with the rise of practical Zionism—the movement to reestablish Jewish sovereignty in its ancestral, indigenous homeland.

The war by Arabs against this justified, moral and legal cause predated not only Israel’s presence over the Green Line, but also Israel’s establishment in 1948. Jews were brutally attacked and murdered en masse beginning in the 1920s, half a century before a single settlement was built.

In fact, groups like the Palestinian Liberation Organization and Hamas state openly in Arabic that the conflict has nothing to do with Israel’s presence in Judea and Samaria. They oppose Jewish sovereignty itself, or in the case of Hamas, they are waging a war against Jews everywhere.

I hope in conversations with friends, family, colleagues and your elected representatives—and in letters to the editor—you’ll emphasize that any solutions to the Israel-Palestinian conflict will have to be based on new realities.

The myths that Israel is blocking peace, that “occupation” or “settlements” are core to the problem or that Middle East peace depends on resolution between Jews and Palestinians have all thankfully been laid to rest in the wake of recent peace breakthroughs.

In fact, the Palestinians’ leverage has been dramatically reduced. At a minimum they will have to recognize the Jewish state. They should also consider stepping up to the negotiating table soon in the hopes of harnessing the region’s new appetite for peace with Israel. It may be their only chance for an independent state.