FLAME
X
Put text, tables or any other HTML contents here, as you would put in any other HTML page. ..... and more.
Skip to content
Home » Despite vicious attacks on Israel by the media, the U.N. and Islamists, we continue to win!
Even Covid-19 crisis can’t kill Palestinians’ anti-Semitic Israel slandersJacques Gautreaux2020-04-27T08:44:16-07:00 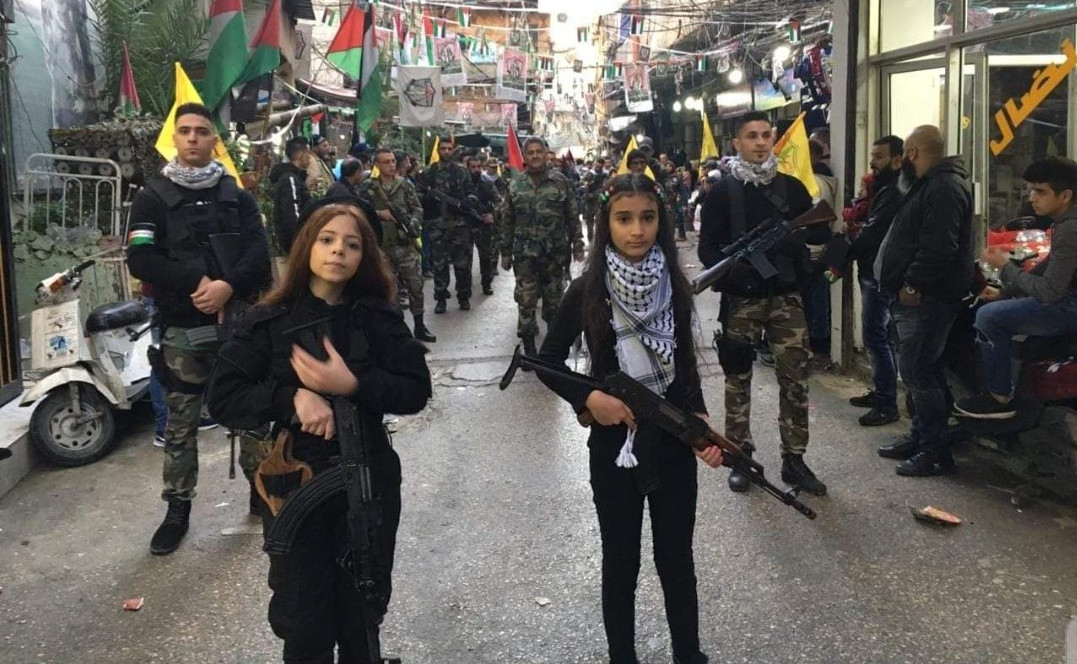 Palestinian girls bearing assault rifles in a military parade: Palestinian President Mahmoud Abbas’ Fatah party posted this photo on its Facebook page. Defeat of Israel and hatred of Jews remains the focal point of Palestinian society, causing Palestinians to malign Israel even as Israel offers to help them defeat Covid-19. (Photo thanks to Palestinian Media Watch.)

Even in the face of the Covid-19 crisis, Palestinians and Israel-haters can’t resist anti-Semitic slanders

Tens of thousands of Arab citizens of Israel serve as doctors, nurses, pharmacists and other healthcare professionals. Arab doctors make up 17% of all Israel’s physicians, and account for an estimated 65% of all doctors on the coronavirus ward at the renowned Rambam Hospital in Haifa.

Remarkably, the Covid-19 pandemic marks the first time Arab and Jewish citizens of Israel are fighting on the same side in a war. Judging by Israel’s relatively low infection and mortality rate across all ethnicities, they seem to be winning it.

Palestinian Arabs in Judea-Samaria and Gaza, though, are fighting the coronavirus, but rejecting a partnership with Israeli medical expertise. Indeed, instead of embracing Israel’s offers to help them, the Palestinians and other Israel haters persist in their bitter war against the Jewish state, fueled by anti-Semitic slander.

Israel has supplied the Palestinians with thousands of coronavirus testing kits, and to Palestinians in Gaza—whose rulers are dedicated to Israel’s destruction—more than 200 tons of medical supplies, 50 tons of building materials and a dozen tons of food. Israel has set up video conferences to share its pandemic-busting techniques with Palestinian medical professionals.

While Israel doesn’t seek thanks, it surely deserves better than the defamatory lies hurled at it by Palestinian letters and speeches at the United Nations.

• Equally bizzare, the PA also claims Israeli soldiers have mounted a campaign of spitting on Palestinian car door handles to spread the virus to the Arab population

These accusations serve partially to cover up the profligate corruption practiced by both the Palestinian Authority and its Hamas counterparts in Gaza. Together they have squandered billions of dollars in international aid provided to them to help their people develop strong economies and healthcare systems.

Instead, Palestinian leaders have used these funds to line their own pockets and wage incessant diplomatic, terrorist and outright military war against Israel—despite the fact that Israel has made numerous offers of land for peace to the Palestinians and pulled up stakes completely in Gaza, leaving it entirely to the Arabs.

It’s no wonder the Palestinians are blaming someone else for their substandard healthcare systems.

But it’s not just the Palestinian Arabs who are using Covid-19 to ramp up anti-Semitic calumnies.

• Linda Sarsour, Arab American former co-chair of the Women’s March and prominent Bernie Sanders supporter, recently claimed that Gaza’s coronavirus disaster is a potential “death sentence for over two million people. . . . That blood will be on the hands of the American people . . . and Israel.”

• Anti-Israel writer Ben Norton asserted that Israel has “bombed to pieces” Gaza’s healthcare system, and “Every Palestinian death caused by COVID -19 is blood on Israel’s hands.” Norton failed to mention the Israel medical supplies flowing into Gaza or Hamas’ habit of using medical facilities to store and launch missiles at Israeli civilians.

• Iran has also accused the U.S. and Israel of purposefully spreading the virus in order to decimate its enemies.

• Even efforts by Israel’s thriving, highly creative biomedical industry to find a vaccine to control the coronavirus have been twisted into an accusation that Israel started the virus in order to profit from its cure. This, even as Israelis are dying daily and its economy has been brought to a standstill by the pandemic.

As absurd as such claims sound to rational people, they fall on the fertile, fetid ground of anti-Semitic minds. They are seized on, amplified, spread in social media and used even by American politicians like U.S. Representatives Ilhan Omar and Rashida Tlaib to delegitimize the world’s only Jewish state.

In fact, this form of anti-Semitism—demonization of Israel and Zionists generally—is not merely hate for hate’s sake, any more than Hitler’s brand was simply an excuse to complain about Jewish culture.

Rather, characterizing Israel as an ally and perpetrator of the plague has a simple, nefarious goal—to justify ridding the world of Jewish people and of Israel, the Jewish homeland.

While the American and European left continues to support Palestinian aspirations for sovereignty—often at the expense of Israel’s security—one has to question support for an alleged underdog whose primary distinguishing social and political feature is anti-Semitism.

I hope that as you discuss Israel’s role in fighting Covid-19 with friends, family and colleagues, you’ll highlight the heartwarming cooperation between Jewish and Arab Israeli medical professionals within Israel to fight the pandemic. Please mention also the generous humanitarian efforts Israel has mounted to help its Palestinian neighbors prevent illness and loss of life from the coronavirus—despite persistent racist slander against the Jewish state.