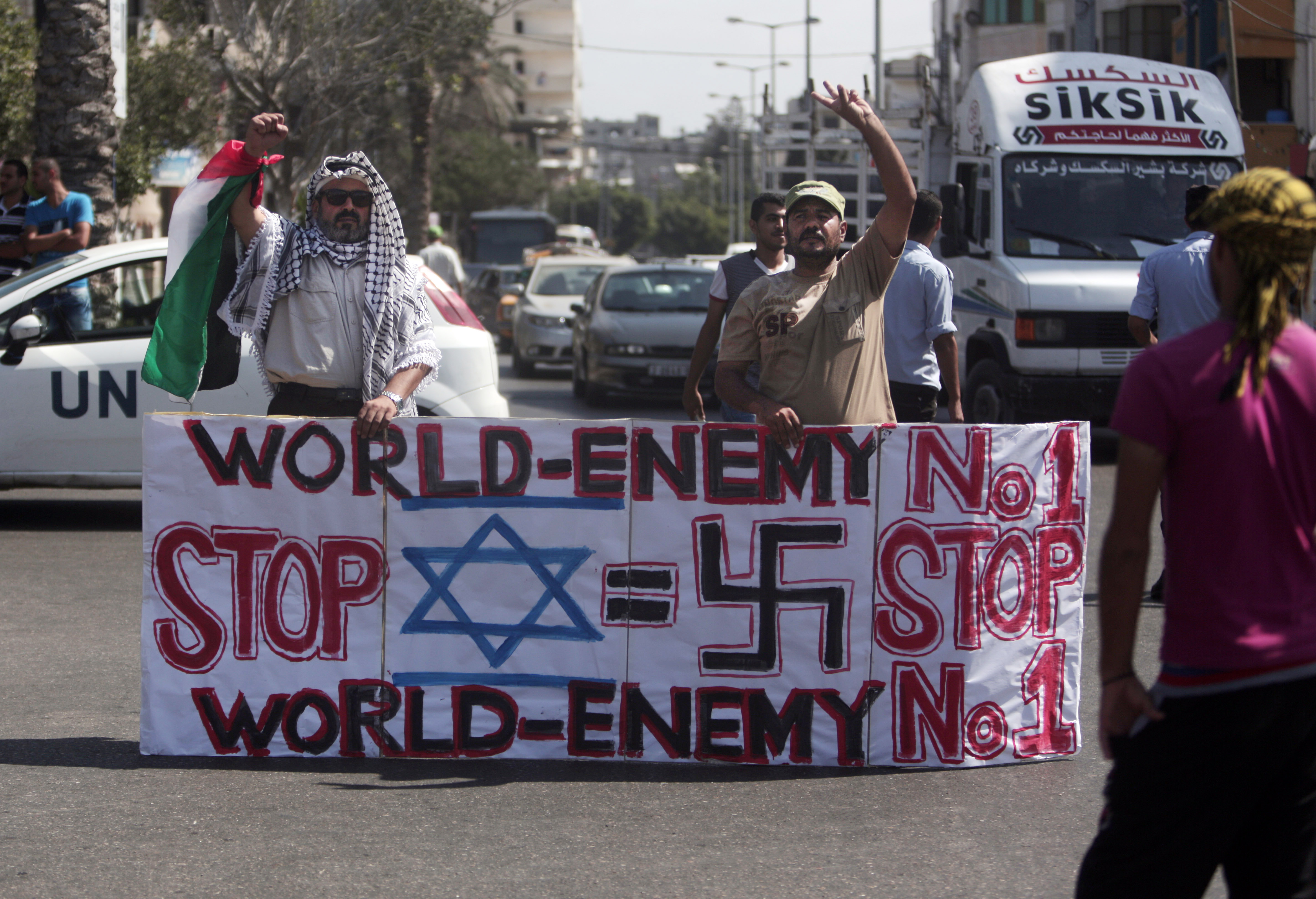 Palestinian UNRWA workers protest measures the U.N. proposed to overcome an acute financial crisis. The Palestinian economy is primarily supported by international donors, including the U.N., one of the Palestinians’ top three employers. Characteristically, as illustrated above, Palestinians blame Israel for problems over which the Jewish state has no control.

Enough is Enough: UNRWA Must Be Abolished and Replaced

Few U.N. agencies have proven as corrupt and useless to the progress and wellbeing of the world’s peoples—especially Palestinian Arabs and Israelis—than UNRWA. Unfortunately, the U.S. has been the single largest financial supporter of the UNRWA organization

UNRWA (United Nations Relief and Works Agency) was created as one of two UN agencies dealing with refugees in the wake of World War II and the decolonization conflicts in the late 1940s.

Faced with many millions of displaced Germans expelled from eastern Europe in 1945, Jews and others who had no home to return to, and Indians fleeing in both directions during the partition of the British Colony into India and Pakistan, and so on, the UN established the UN High Commissioner for Refugees (UNHCR). Its task was the sheltering and relocation of these hordes of refugees around the world. And it largely succeeded.

But the UN, at Arab insistence, had also set up an agency, UNRWA, to aid the 650,000 Palestinian Arabs displaced after the Arab nations’ unsuccessful invasion of Israel following its creation. This is the only refugee population that has its own UN agency.

UNRWA was unique in other ways. Rather than attempting to resettle its refugees in foreign countries, UNRWA specifically prevented them from doing so, keeping them in permanent, squalid camps. Even those refugees in Jordan, who were granted Jordanian citizenship by King Hussein, are still “refugees” under UNRWA, and unable to lead normal lives there.

But it gets worse: the UNHCR, successful in handling 70 years of refugee tragedies around the world, defines the “refugee” as someone forced to flee his or her native land. For prolonged UNHCR efforts, the number of refugees dwindles.

Not so for UNRWA: all descendants for all generations are considered refugees. Their number has thus grown to over five million, rather than the 20,000-30,000 still alive from the original 1948/9 population.

UNRWA does not make any effort to resettle or relocate its permanent refugees and keeps them in a perpetual stateless situation. UNRWA runs the schools, whose presentation of history is essentially that of the PLO or Hamas.

In other words, UNRWA is perpetuating the ongoing Israeli/Arab problem, not trying to create any sort of reconcialiation or dignified existence for its wards.

Further, UNRWA schools and clinics in Gaza are routinely used by Hamas as armories and launch sites, and senior Hamas figures hold management positions in UNRWA.

She and other American leaders, such as Senior Advisor to President Trump Jared Kushner, are increasingly calling for an outright end to UNRWA. The UNHCR would take over its mission and convert it to one of problem resolution rather than aggravation and perpetuation.

Israel detests UNRWA for obvious reasons. But Israeli leaders are wary of suddenly having responsibility for millions of Palestinian Arab “refugees.”

In this week’s featured article, “Time for UNRWA To Go,” Morton A. Klein and Daniel Mandel of the Zionist Organization of America argue that not only is UNRWA a sham organization whose activities do not help the Palestinians, but it actually does harm to the Palestinian cause and the cause of peace. They also assert that only the United States can lead the world toward abolishing this corrupt agency, while paving a constructive path to peace.

I hope you’ll forward this incisive perspective to friends, family and fellow congregants to help them understand why pressure on the American government and Israel to abolish UNRWA is a strategy we should support for the eventual peace of the region.

I hope you’ll also visit FLAME’s new Facebook page, as well as read the P.S. below, which highlights a FLAME hasbarah message on the jihadist, anti-Semitic curriculum that UNRWA schools use to teach more than 500,000 Palestinian children in Gaza, Judea-Samaria, Jordan and Lebanon.

Time for UNRWA to Go

It is past time for two things to happen: The disbanding of UNRWA and its mandate, and the assumption of its duties by the UNHCR.

Palestinian Arabs have occupied everyone’s attention in recent weeks as a result of the rioting and disturbances on the Israeli/Gaza border. Yet few wonder why the refugees, on whose explicit behalf these days of rage have been launched, are there at all. Most refugee problems are dealt with in a matter of months or at most years, yet few pause to consider why a Palestinian Arab refugee problem still exists after 70 years.

The reason is actually simple: from the outset, the Arab world has resisted their resettlement. As a result of this concerted opposition, the international community has fallen in line and long ago discarded the goal of their resettlement.

The United Nations Relief and Works Agency (UNRWA), the relief agency charged with overseeing the Palestinian Arab refugees of the 1948-9 Arab/Israeli war, is a perfect reflection of this fact. While other refugee relief organizations seek to resettle the refugees in their charge quickly, UNRWA does not: it seeks to maintain and sustain them in their current predicament—in large, sprawling refugee camps, many of which have essentially become towns and cities, in the West Bank (Judea/Samaria), Gaza and neighboring Arab countries.

UNRWA exists in its current form only because it operates under a mandate that uniquely defines as “refugees” not only Palestinian Arabs who fled the fighting and chaos during the 1948-9 war—which would be in accord with the standard definition of “refugee” as applied in all other cases—but also successive generations of their descendants.

Thus, Palestinian Arab refugees and their millions of descendants under UNRWA care live in limbo, prohibited from living and working in the economy of the wider society in which they are located. UNRWA-run camps are thus entering their eighth decade of existence, housing sometimes the third- or even fourth-generation descendants of the refugees they were originally built to serve temporarily.

UNRWA also serves to perpetuate the conflict that created the refugees by permitting their radicalization and irredentism. To receive an education in UNRWA camp is to be raised to accept the fabricated Palestinian Arab narrative of original Israeli aggression and deliberate dispossession of Palestinian Arabs. A seething determination to return to and eliminate Israel has been the social consequence.

Indeed, the abortive 2000, 2000-1 and 2008 American-endorsed peace offers that encompassed the creation of a Palestinian state within almost the entirety of the West Bank and Gaza were most likely rejected by the Palestinian Authority (PA) for the simple reason that PA leadership could not sign off on any peace plan that encompassed Israel’s continued existence and survive.

All this stands in stark contrast to the United Nations High Commissioner for Refugees (UNHCR), the international body that deals with all refugee problems other than the Palestinian Arab one. UNHRC observes a universal definition of refugee status, one that applies solely to those who actually fled their country during hostilities, civil war, natural disaster or other disturbances. UNHCR works to resettle refugees quickly and to dismantle the temporary refugee camps housing them. Nor does it count as refugees subsequent generations of descendants of refugees.

Thus, instead of the Palestinian Arab refugees officially numbering 30,000—the approximate number of original refugees still alive today-their number, according to UNRWA, is some 5.3 million.

Accordingly, if all major refugee problems of the past century have been solved through resettlement rather than repatriation, then it needs to be understood that UNRWA is a central component of the problem rather than of the solution regarding Palestinian Arab refugees.

It is past time for two things to happen: the disbanding of UNRWA and its mandate, and the assumption of its duties by the UNHCR.

Such a huge administrative adjustment can occur only if becomes the policy of the United States that it should occur. No other country has either the clout or will to propose this outcome and to persuade and, if necessary, pressure friends and foes into supporting it. No other country has the ability to firmly place this proposal on the international agenda. And no peace agreement worthy of the name can be achieved one day without the disbanding of the UNRWA system of maintaining and entrenching a hostile, unsettled and irredentist population as a permanent impediment to peace.

Short of this occurring, the current situation, with the “refugees” continually growing in number and determined on Israel’s elimination, no Israeli/Palestinian Arab peace can be expected at any time.