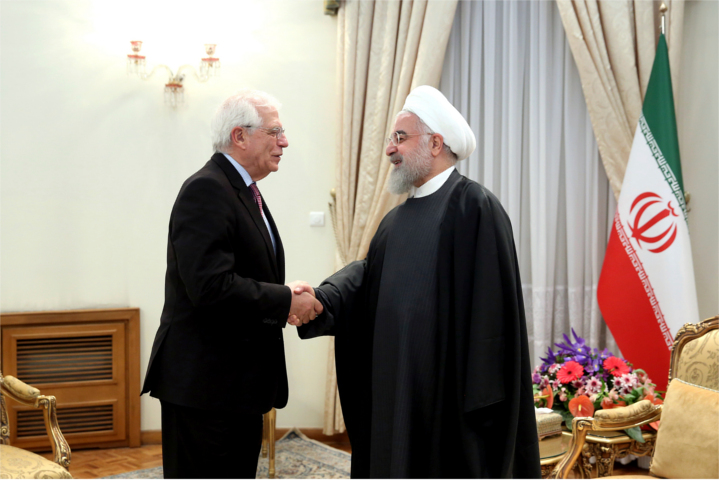 The world would be much better off if the Europeans focused on the myriad problems on their own continent. Instead, the national and trans-national institutions of Europe insist on inserting themselves gratuitously into distant problems of which they have little understanding and zero political standing.

Exhibit A: The present map of Middle East, reflecting dysfunction within nearly all its borders, is largely the work of the nations that comprise today’s European Union (EU). In particular, France, along with its World War I ally, Great Britain, drew the boundary lines of the Middle East, creating new states and states-to-be under the aegis of the post-war League of Nations.

All evidence is that they made a hash of it, and the turbulence that has wracked the Middle East for decades is attributable to European ham-handedness and cultural ignorance in creating its boundaries and ethnic compositions.

Sadly—but unsurprisingly—the Europeans are still at it, most recently opposing central elements of President Trump’s Middle East Peace Plan. Rather than help, the EU’s posture is more likely to exacerbate one of the key messes they have sustained year after year.

While nursing the pain and disbelief over England’s Brexit from their EU club, EU foreign policy chief Josep Borrell found the time to critique the Trump plan, stating that “the U.S. initiative departs from internationally agreed parameters.” He singled out the need to address the unresolved final-status issues, like agreements on borders, the status of Jerusalem, and the alleged Palestinian right of return.

In other words, Borrell basically demands that the catastrophic policies of past decades be perpetuated. He may not have noted this, but every prior attempt to address these “final-status issues” has resulted in abject failure—often accompanied by massive blood-letting, as in the case of the Second Intifada at the beginning of this century.

He also seems to have overlooked the fact that the Palestinian Authority (PA) and its leader, Mahmoud Abbas, have steadfastly refused to negotiate with Israel for almost five years. Likewise, Abbas has embargoed any diplomacy with the United States since President Trump’s recognition of Jerusalem as Israel’s capital two years ago.

The EU, true to its supercilious attitude toward Israel, maintains its diplomatic offices in Tel Aviv, which it decided was Israel’s real capital—no matter what those silly Jews think.

The finality of the EU foreign minister’s rejection of the Trump initiative shouldn’t be overstated though. Borrell’s statement was a “preliminary” assessment of the deal. This was because final positions of the EU collectively must receive unanimous support from its 26 (remaining) members. Poland, Italy, Hungary, Austria and two others decided to withhold support from Borrell’s position, pending further assessment of the Trump plan and issues it seeks to address.

The EU, which has poured billions into the PA’s corrupt coffers and which allocates tens of millions each year to support NGOs whose only purpose is to subvert Israel, seems not to have noticed that the Middle East of 2019 bears little resemblance to the Middle East of 1949, 1967, 1993 or even 2008.

The Arab Spring upheaval and the unimaginable rise of ISIS have made all Middle East regimes but Israel’s seem quite impermanent. Syria, Iraq and Lebanon are independent countries? Check back next year. Jordan’s and Egypt’s peace treaties with Israel remain reliable? Maybe, maybe not.

And that doesn’t begin to address Iran and its proxy militias like Hizbullah, who are digging tunnels under Lebanon’s border with Israel and launching missiles into the Golan Heights.

To the EU, almost anything Israel does to protect itself is “provocative” and “disproportionate.” For America to insist that Israel receive the “secure borders” promised to it in 1967 via UN SCR 242 is, in the judgment of the EU, over-reaching. And the fact that the Jewish people is indigenous to the disputed territories or that the Palestinian Arabs have no inherent international rights to Judea-Samaria (the West Bank) has always escaped the EU’s notice.

The EU’s initial take on President Trump’s initiative was all too expectable. Their reversion to infantile—and hopelessly obsolete—truisms about the Middle East and its denizens should be no surprise. They architected this mess known as the Middle East.

If America and Israel should have the energy and creativity to adapt the Europeans’ deluded Middle East blueprints to today’s reality, a simple “thank you” from the EU would be nice. In the meantime, the EU should turn inward to confront its own problems, which, by the way, include rampant anti-Semitism and related anti-Zionist passions across the continent.

In discussions with friends, families and colleagues, we encourage you to point out that Europe has little concern for Israel’s security, and is advancing tired positions on the Middle East and peace that are long past their sell-date.

In addition, I hope you’ll also take a minute, while you have this material front and center, to visit FLAME’s lively new Facebook page and review the P.S. immediately below. It describes FLAME’s newhasbarah campaign—outspokenly questioning the validity and wisdom of the so-called two-state solution that seems so dear to the hearts of the EU. Perhaps the Trump proposal can offer something that is more valid and wise.