FLAME
X
Put text, tables or any other HTML contents here, as you would put in any other HTML page. ..... and more.
Skip to content
Home » Despite vicious attacks on Israel by the media, the U.N. and Islamists, we continue to win!
As Palestinians squander chances for peace, Israel strengthens its relationship with Arab statesJacques Gautreaux2020-06-22T11:29:08-07:00 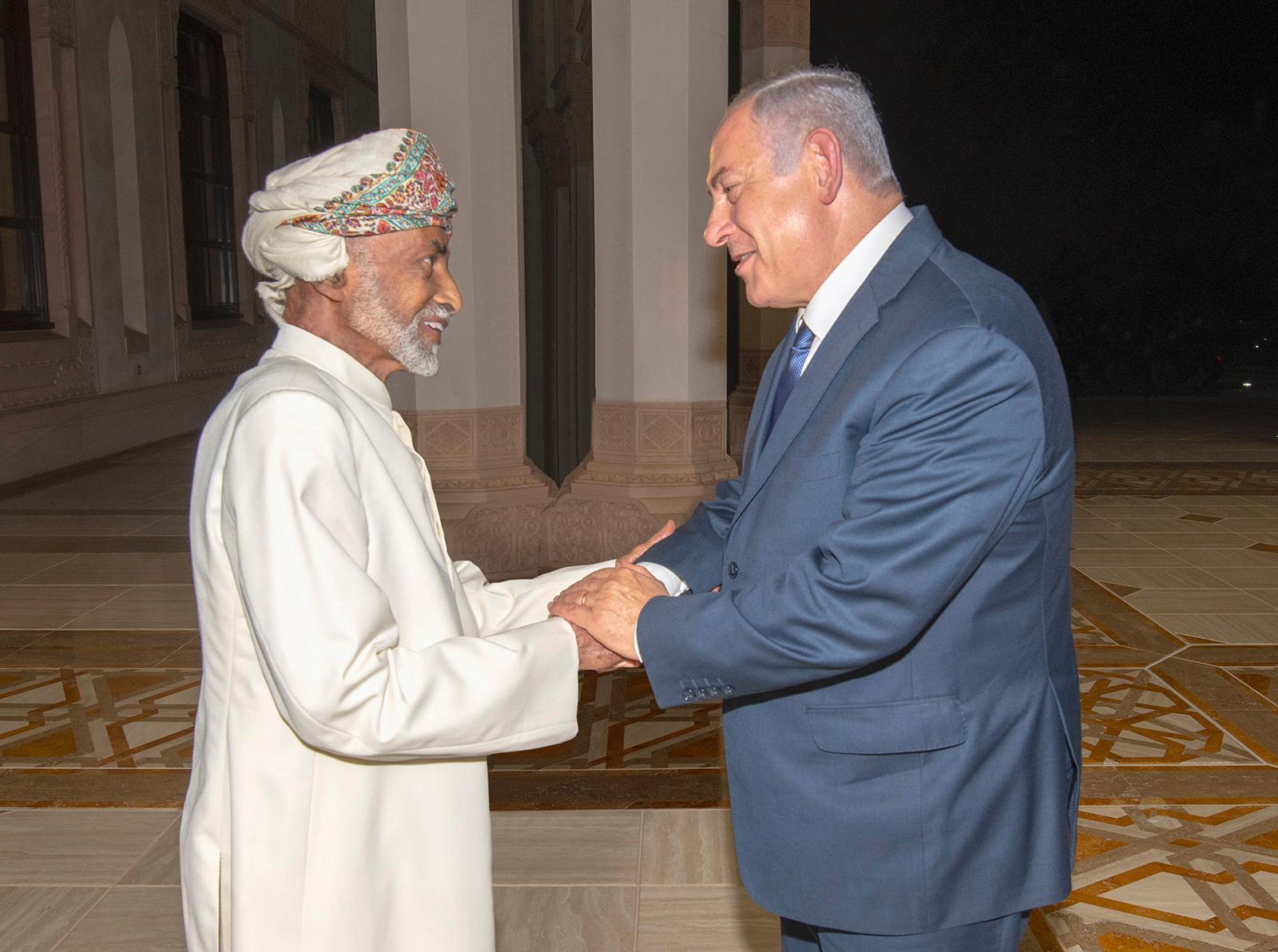 Oman’s Sultan Qaboos welcomes Israeli Prime Minister Netanyahu in Muscat, Oman in October 2018. Thanks for intensive efforts by Israel to forge closer relationships with Arab Gulf states, this was the first visit to Oman by an Israeli head of state since 1996.

As Palestinians squander chances for peace, Israel strengthens its relationship with Arab states

The Palestinian Authority (PA) rejected both deliveries, because they considered the UAE flights a step toward “normalization” with the Zionists. Which it was. But the purpose of the flights was to save Palestinian Arab lives.

This contradiction symbolizes a sea change in Israel’s—and the Palestinians’—relationship with leading Arab nations.

On one hand, Israel’s patient, below-the-radar nurturing over the last decade of diplomatic relations with key Arab states is starting to bear fruit. This, combined with profound shifts in the geopolitical landscape, has given the Arabs powerful, practical reasons to seek closer ties to the Jewish state.

At the same time, Palestinian leadership is suffering a deterioration of support from neighboring Arab states. Arabs are losing patience with the PA’s spiteful refusal to negotiate with Israel, their failure to reconcile with the Hamas government in Gaza, their new-found friendship with arch-enemy Iran, and their waste of billions of dollars in Arab aid with no economic or political progress to show for it.

Israel’s cooperation and communications with the leadership of eight Arab nations—UAE, Saudi Arabia, Egypt, Jordan, Oman, Morocco, Bahrain and Sudan—is greater than ever. However, despite increased warmth, none of these countries is yet ready to forge a formal alliance with Israel. Nor are their “Arab streets” yet remotely sympathetic to the Zionist cause.

Nonetheless, numerous gestures by Arab political and thought leaders strengthen Israel’s standing in the court of world opinion, and slowly, even on the Arab street:

• Both Saudi Arabia and the UAE encouraged Palestinian leaders to embrace the Trump peace plan as a foundation for new talks with Israel—understanding that such a move would almost surely force them to accept Israel’s application of sovereignty to significant portions of Judea-Samaria (the West Bank).

• Both Israeli Prime Minister Netanyahu and Culture Minister Regev visited Oman in 2018, and the two nations have had cordial ties back to 1994, giving Oman the opportunity to serve as a mediator between Israel and the Palestinians.

• Bound by a peace treaty, Egypt and Israel share a close relationship, coordinating air strikes against al Qaeda affiliates in northern Sinai, as well as Palestinians’ transit between Egypt and Gaza.

• Also linked by a peace treaty, Jordan depends on Israel for water and security, particularly from the Palestinians, who pose a constant threat, since 80% of Jordan’s population is Palestinian. Jordan has said it does not want a Palestinian military presence on its border with the Jordan Valley. Further, a Jordanian official recently asserted “We have no interest or intention of damaging our security relations with Israel on behalf of the Palestinians.”

• In January 2020, Morocco’s military signed a deal for three Israeli drones at a price of $48 million.

• After Israel launched military strikes in 2019 against Iran in Iraq, Lebanon and Syria, Bahrain’s Foreign Minister in 2019 came to Israel’s defense, noting that “one who strikes and destroys [Iran’s] piles of ammunition is not to blame. This is self-defense.”

• In February 2020, Prime Minister Netanyahu met with Sudan’s transitional council leader in a two-hour secret meeting in Uganda, agreeing “to start cooperation leading to normalization of the relationship between the two countries.’

On the other side, the Palestinians have continued their obstinacy regarding negotiations with Israel. They’ve refused any talks at all since 2014, and currently also refuse to speak to the U.S., which earlier this year mounted a major initiative to bring Israel and the Palestinians to the table.

Both Palestinian governments—in Ramallah and Gaza—remain at bitter odds, an internecine conflict now in its 14th year.

What’s worse, both Palestinian groups have active outreach, diplomacy and aid deals with Iran. Since the Islamic Republic is considered enemy number one by Arab Gulf states and the West, these Palestinian flirtations threaten relationships with their Arab brethren, the U.S. government, U.S. members of Congress, and even member states of the European Union.

As tensions escalate dangerously between Iran and the U.S., Europeans, Arab Gulf states and Israel, the greatest geopolitical threat to all the parties is a spark that could ignite a costly, destructive regional war. Concern about the Palestinians’ self-inflicted failure to achieve independence ranks miles behind this world-class conundrum.

What’s more, the recent U.S. peace plan offers a vision of cooperation between the Gulf states, Israel and America—not only to solve the “Palestinian problem,” but also to set the stage for economic and military collaboration between Israel and the Arab nations. This vision has a goal of both mutual protection among the parties, but also of greater economic diversity and prosperity for the Jewish and Arab states.

While the Arab Gulf nations and Israel seem poised to profit from this new alignment of forces and interests, the Palestinians are teetering on the brink of economic bankruptcy and political isolation.

Absent humble and heroic peace overtures from the Palestinian Arabs—which today seem like a science-fiction fantasy—it’s hard to imagine that the hopelessly splintered Palestinian factions will make any progress toward their putative goal of independence, let alone their obsessive dream of destroying Israel.

I hope as you discuss the prospects of peace between the Palestinians and Israel—with friends, family, colleagues and in letters to the editor—you’ll note that the Palestinians are losing friendships with their Arab neighbors due in part to their poisonous embrace of Iran. What’s more, Arab Gulf states are increasingly drawn to support Israel because of new shared political, military and economic interests that the Palestinians simply can’t compete with.