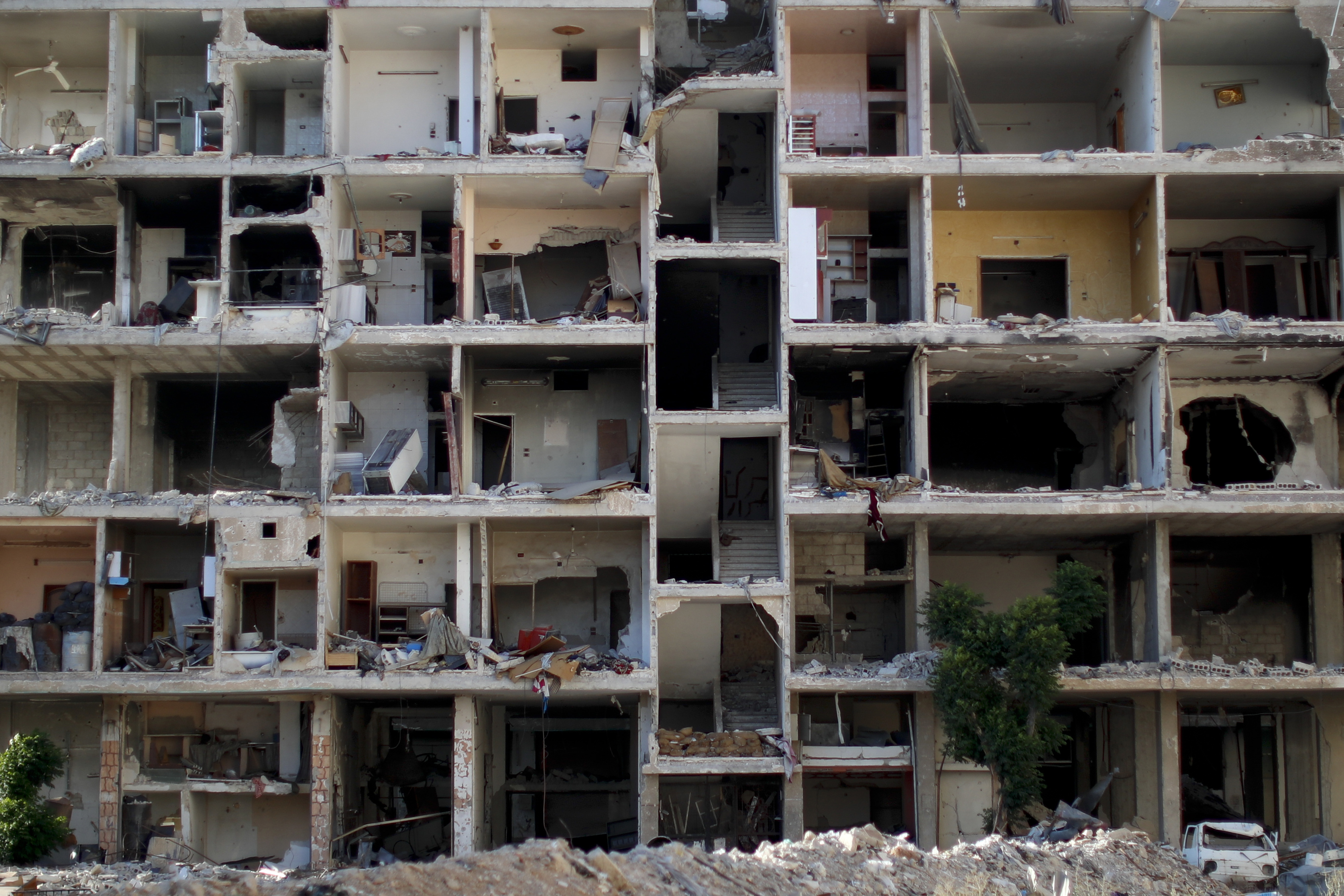 An example of victimization of Palestinians by fellow Arabs, the Yarmouk refugee camp in Syria once housed 160,000 Palestinian Arabs. It was totally destroyed in the Arab Syrian civil war, but was barely covered by world media or noted in the U.N.—let alone protested by the Palestinian Authority, Hamas or political leftists.

Arab nations continue to victimize their Palestinian Arab brethren—and have done so since the creation of the original refugee problem in 1948.

Indeed, not so many years ago, hundreds of thousands of Palestinian Arabs fled for their lives or were expelled from their homes and went into exile. Thousands more were tortured or killed before they could flee.

But these horrible events were not related to Israel’s 1948 War of Independence. Rather, they occurred in 1991 in the Arab nation of Kuwait. Between the brief Iraqi occupation of Kuwait as its “19th Province” and the American-led liberation of Kuwait, some 400,000 Palestinian Arabs were forced to leave Kuwait, the Arab nation they had called home for decades.

If you don’t remember this horrific episode, in which more than half the number of Palestinian Arabs were displaced, compared to the 1948 “Naqba” of Israel’s creation (about 700,000 Palestinian Arab refugees), you can be forgiven. The world’s media and its leadership—especially Arab leadership—forgot about it, too.

The UN, Europe and (often) the US State Department also forgot to condemn and call for redress for the 20,000 Palestinian Arabs expelled from Jordan in 1970, the thousands expelled from Libya in 1995 (in response to the Oslo Process!), the 21,000 expelled from Iraq after the overthrow of Saddam Hussein in 2003, and the 31,000 victimized, tortured and expelled by Lebanon in 2007.

Certainly, no Arab states or the Arab League demanded repatriation or reparations for the hundreds upon hundreds of thousands of Palestinian Arabs abused and expelled by their fellow Arabs.

The world, and especially the Arab world, is energetic in condemning Israel for any activity, political or military, that adversely affects the Palestinian Arabs.

But a look at history demonstrates that Palestinian Arabs have, for decades, been primarily the victims of their fellow Arabs and other Arab states, with massive expulsions and the denial of citizenship and work permits in their “host” countries. Jordan is the only partial exception to the rule.

It is apparent that the world only cares about the Palestinian Arabs when it can conjure a Zionist enemy for its accusations. This includes the organs of the UN as well as the “virtuous” leftists who seem incapable of affixing blame and demonstrating against the corrupt and brutal Arab states of the Middle East.

Now, an even greater tragedy for Palestinians has unfolded in the hellhole known as Syria. Again, the world is silent about the victimization of Palestinian Arabs by their Arab “friends.”

In this week’s featured FLAME Hotline article (see below), Dr. Edy Cohen, a researcher at the BESA Center argues that the horrific displacements and loss of life for Palestinian Arabs—by Arabs—in the Syrian Civil War is again being neglected by world bodies. Meanwhile, not a day goes by without Israel’s condemnation from the United Nations and its agencies, its Arab members, and the political left in general.

I hope you’ll forward this incisive perspective to friends, family and fellow congregants to help them understand why the avid condemnation and pressure on Israel regarding Palestinian Arabs is, at best, selective indignation by Arab states and, more tellingly, world bodies.

I hope you’ll also quickly review the P.S. immediately below, which describes one of FLAME’s hasbarah campaigns to explore the nature of the Palestinian Arab refugee problem. I hope you agree with and will support this message.

A recently published report by the Action Group for Palestinians in Syria (AGPS), a human rights group, documented 3,840 cases of Palestinians who have been killed since the onset of the Syrian civil war in 2011—nearly four times as many as those killed during the six years of the first intifada (December 1987-September 1993). The causes of death ranged from artillery shelling to shootings to torture in the regime’s infamous prisons across the country.

In addition to this report, the Syrian regime released for the first time a list of names that included 548 killed Palestinians. While the regime’s report did not note their causes of death, rights groups agree that those Palestinians died as a result of being tortured, starved, and deprived of adequate medical treatment.

The AGPS also said that 1,682 Palestinians are still missing, their fates unknown. According to some assessments, these Palestinians were either killed at some time during the bloody civil war or—”in the best case”—are still in prison. Therefore, at least 5,522 Palestinians have either been killed or have gone missing since 2011.

Along with those killed or missing, tens of thousands of Palestinians in Syria have lost their homes and employment. The Yarmouk refugee camp, which was home to tens of thousands, was utterly demolished over the course of the war. Before the camp was destroyed, the Assad regime laid siege to it. During that time, images of emaciated Palestinians began emerging in Syrian opposition media outlets.

Despite these horrors, not one official in the Palestinian Authority publicly condemned the Assad regime.

This is incredible. Where is the outcry from the PA, Arab and global news outlets, rights groups, Palestinian and Arab politicians? Where is their denunciation of Syrian President Bashar Assad’s war crimes against the Palestinians? Why isn’t every single Arab lawmaker in Israel excoriating the Syrian dictator?

When a Hamas or Islamic Jihad terrorist from Gaza is killed by IDF soldiers while trying to plant a roadside bomb or trying to breach the border fence, the Arab and Western worlds are apoplectic. The Arab League issues its familiar condemnation; the consistently hostile Kuwait denounces Israel at the UN and tries to convene the Security Council; Mahmoud Abbas requests international protection for the Palestinians; and all these reactions are covered round the clock by the Arab and Western press.

Palestinians who are killed by IDF fire can be used as a tool, whether by Arab countries or the Western world, to undermine and weaken Israel. Human rights groups in the West and in Israel too invest most of their energies and attention to the Palestinian issue in Israel. The equation is plain to see: When Israel or the Jews can’t be blamed for killing Arabs, it’s not interesting.

Throughout the war in Syria, Abbas’s silence on the plight of the Palestinians there has been deafening. He has never repudiated Assad or Iran for killing Palestinians. He seeks the best of all possible worlds: support from both Iran and the Arabs. It appears he has been successful.

During the atrocities perpetrated in Iraq several years ago, a downtrodden Yazidi woman held a placard that said: “The tragedy of the Yazidi people is that the Jews aren’t their enemy.”