FLAME
X
Put text, tables or any other HTML contents here, as you would put in any other HTML page. ..... and more.
Skip to content
Home » New opportunity opens for the Palestinians: Will they seize peace and prosperity . . . or let it slip away again?
After 75 years, has the UN completely exhausted its moral legitimacy?Jacques Gautreaux2020-10-26T11:05:52-07:00 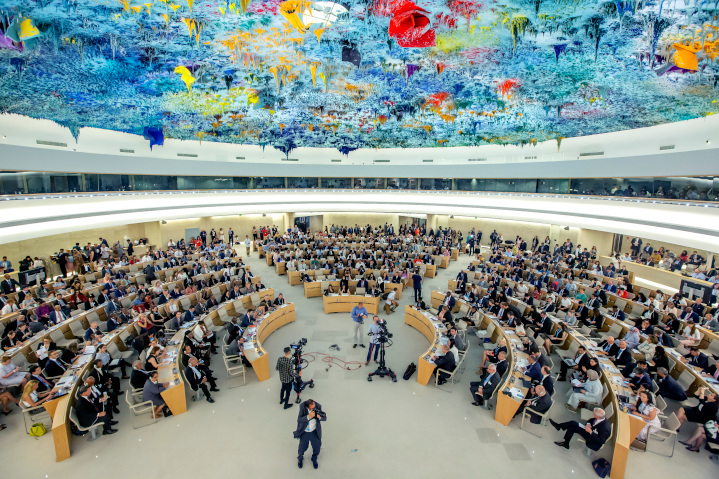 Headquarters for the UN Human Rights Council, a glittering example of UN hypocrisy, whose newest members include China, Russia, Cuba and Pakistan and whose agenda uniquely features a standing item on Israel’s “violations.” This is just one example of the UN’s moral bankruptcy.

After 75 years, has the UN completely exhausted its moral legitimacy?

On September 21, the United Nations marked its 75th anniversary with a one-day, high-level meeting of the UN General Assembly on the theme: “The Future We Want, the UN We Need: Reaffirming our Collective Commitment to Multilateralism.”

While the goals of cooperation and dialogue are lofty and important, judging by its achievements of the last few decades, the United Nations can be deemed a failure. It has not prevented war or conflict, it has been rocked by corruption and scandal, and it has largely been used by dictatorships and serial human rights abusing countries to hide their cruelties.

Like any corrupt collective that has failed to attain its advertised ideals, it needs a scapegoat to attack as a means to deflect and distract from its own failings.

In the State of Israel, UN members have found the perfect fall guy. The Jewish state was for most of its existence not welcome as part of any regional groupings, nor part of a body of nations based on a regional, religious or linguistic basis. It is populated by a people with a centuries-old history of being scapegoated and about whom conspiracy theories already abound.

Israel’s struggle to achieve independence in the face of concerted opposition from the multitude of Arab Muslim nations has provided the ideal platform for the U.N. to distract from the failures and misbehavior of many of its members.

A perfect example was when, last year, at a meeting of the 54-nation UN Economic and Social Council, Israel was the sole country named as a violator of women’s and human rights. That Saudi Arabia and Iran voted for a resolution singling out Israel is ironic, considering the egregious lack of basic rights and freedoms for women in those repressive Islamic nations.

In fact, as newly appointed Permanent Representative of Israel to the United Nations Gilad Erdan recently noted: “The UN is risking the loss of whatever relevance and legitimacy it has left. If the organization can’t take action against the worst regimes and continues to cling to the Palestinian obsession, in 75 years there will be no UN to mark its birthday, because it will simply lose its right to exist.”

For many, that threshold has already been met.

It is noteworthy that the United Nations was established in the ashes of the Holocaust. The preamble to its Charter, expressing “faith in fundamental human rights, in the dignity and worth of the human person,” stands in direct opposition to the slaughter of six million Jews and millions of others that directly preceded its creation. This fact has not prevented human rights-abusing nations to use the UN as a platform to hide its own dubious activities while targeting Israel, the national homeland of the Jewish people, also established in the wake of the Holocaust.

Earlier this month, China, Russia, Cuba and Pakistan were among the 15 countries that won seats on the ironically named UN Human Rights Council (UNHRC) in a secret-ballot vote carried out by the 193-member General Assembly. This is the same council, established in 2006, that has a permanent agenda item against Israel—and no other country—and has adopted 90 resolutions condemning the Jewish State, more than all the resolutions against Syria, North Korea and Iran combined.

One would be hard pressed to note too many conflicts around the world that the UN actually prevented or actively ended. In fact, just as a recent and significant fact, it has proven completely incapable of preventing the ongoing slaughter of hundreds of thousands of people in the Syrian and Yemeni civil wars, while still ensuring that Israel is held up prominently as the greatest barrier to peace and stability in the Middle East.

In fact, in some conflicts, the UN has even played a role in massacres, like the Srebrenica massacre in 1995, where Serbian troops committed genocide against Bosnian Muslims in the largest case of mass murder on the European continent since World War II. The area of the massacre in Srebrenica had been declared a safe area by the UN, protected by 400 armed Dutch peacekeepers, who left the area before the violence began. Subsequent investigations demonstrated that the UN headquarters had relayed instructions that the UN peacekeepers should not be “too zealous” about disarming the eventual perpetrators.

In the context of Israel, the United Nations peacekeeping forces have ranged from futile to harmful. UNIFIL, on the border with Lebanon, has made no sustained effort to demilitarize Hezbollah. UNDOF in Syria, whose members had to be rescued by Israel during the fighting, has at times been restricted to its own headquarters because of the risk from local terrorists. The UN has not been able to guard against a single one of Israel’s enemies—notably Palestinian terrorists in the West Bank or in Gaza—or prevent hundreds of attacks on its territory and citizens.

It has already been demonstrated that Israel gains little and loses much from its UN membership. Moreover, the world is certainly not a more secure and stable place as a result of the UN. In fact, the opposite could be argued. The UN agenda has been hijacked by non-democracies, which make up the majority of its members, to hide their human rights abuses. Instead, Israel is held responsible for most of the Middle East’s problems in the continuing need to deflect and distract from its systemic failures.

All this means the UN is a failing organization that does more bad than good. The current U.S. Administration has tried to pressure the UN into cleaning up its act by withdrawing funding from bodies and institutions that do not live up to their mandate or are serial Israel-bashers, like UNRWA—the Palestinian refugee agency that exacerbates the conflict and privileges Palestinian refugees over all others worldwide—and the UNHRC.

The UN’s budget is derived from national contributions, with a disproportionate amount provided by Western and democratic countries. I hope you will point out to friends, family, colleagues and your elected representatives that if more nations followed the American example—and held the UN and its various institutions more accountable and financially incentivized reform—then perhaps the United Nations might start living up to its original worthy and lofty goals.

Absent that unlikely action, both the U.S. and Israel have every reason to keep an arms distance—if not withdraw entirely—from the UN’s many corrupt agencies and activities.