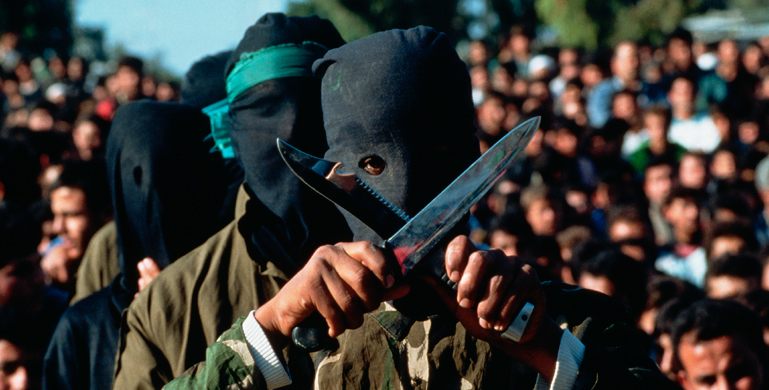 Tens of millions of U.S. taxpayer dollars are spent annually to pay salaries to Palestinian terrorists who murder innocent civilians in Israel.

To prop up the virtually bankrupt Palestinian Authority (P.A.), the U.S. sends Palestinians more than $400 million a year in aid. The P.A., however, spends some $140 million annually to reward jihadists and their families for murderous acts that kill innocent Americans and Israelis.

“You can’t be a partner in peace when you are paying people to commit terrorist acts.”
Senator Lindsey Graham

In June 2016, 13-year-old Hallal Yaffa Ariel was stabbed to death in her bed by a Palestinian terrorist who broke into her family’s home. In March of this year, 28-year-old Taylor Force, a West Point graduate and two-tour U.S. army veteran from Texas, was killed as he strolled with his wife in Jaffa by a knife-wielding Palestinian. Hailed as heroic jihadist martyrs by the Palestinian Authority, both terrorists and their families now receive monthly stipends from the P.A.

For more than 20 years, the Palestinian government has openly used aid donations from the U.S. and other countries to motivate and reward terrorists. Depending on the number of people murdered in a terrorist attack, salaries range from $364 to $3,100 per month. Terrorists with families and who die in the act or are captured and sentenced to 30 years or more receive the highest allowances. These expenditures—a hefty $140 million per year—make up an estimated 10% of the Palestinian Authority’s total budget.

In addition to financial incentives for terror, jihadists also receive abundant moral support from the Palestinian government. Palestinian president Mahmoud Abbas has said, “We welcome every drop of blood spilled in Jerusalem. This is pure blood, clean blood . . . With the help of Allah, every martyr will be in heaven, and every wounded will get his reward.”

U.S. Payments to the Palestinian Authority. According to a Congressional Research Service report, the U.S. since the mid-1990s has contributed more than $5 billion in security assistance and bilateral economic aid to the P.A., and American taxpayers’ current annual commitment is now some $400 million. In fact, Palestinians are the world’s largest per-capita recipients of international aid.

While a 2014 State Department report praised the Palestinian Authority for making “terrorism financing a criminal offense,” the P.A. still has laws on its books mandating payments to terrorists and their families. In the face of mounting criticism of such hypocrisy from Western nations, however, the P.A. concocted a deceitful shell game, seeking to hide its support of terror by changing what used to be termed “salaries” to “assistance” and shifting distribution duties from the P.A. to the Palestinian Liberation Organization, which does not directly receive foreign funding. So far, this sham seems to have satisfied some of the gullible nations that support the Palestinian Authority.

Time to End U.S. Funding of Terror. At last, members of Congress are introducing legislation to prevent U.S. aid from supporting this culture of jihadist terror. Senators Dan Coats, Roy Blunt and Lindsey Graham, for example, have introduced legislation to end financial aid to the Palestinian Authority until it stops incentivizing terrorism. Senator Graham has noted that “You can’t be a partner in peace when you are paying people to commit terrorist acts.”

However, both the U.S. and Israel fear that cutting funding to the Palestinian Authority could destabilize the Palestinian government, preferring a duplicitous P.A. to Hamas or Islamic State. Lamentably, those familiar with the corrupt P.A. know that expectations of reforming it anytime soon are fantasy.

But surely funding a Palestinian terror program that kills Americans and Israelis cannot serve the long-term interests of the United States or Israel. Cutting off aid to the P.A. is a move in the right direction, but it is inadequate, since it doesn’t address the Palestinian culture of Jew hatred and denial of Israel’s right to exist as a Jewish state, both of which beliefs make any notion of peace impossible.

Unfortunately, the Palestinian government perpetuates in its media, mosques and schools the myths that Jews have no rights to sovereignty in the Holy Land and that all non-Muslims, even innocent civilians, are laudable targets for terrorist attacks.

In order to achieve a secure and lasting peace between Israel and the Palestinians, convicted terrorists or who those die while committing terrorism must not compensated by the Palestinian government for these crimes. It is a travesty that American taxpayer dollars subsidize this hateful practice, and Congress should move urgently to stop it.