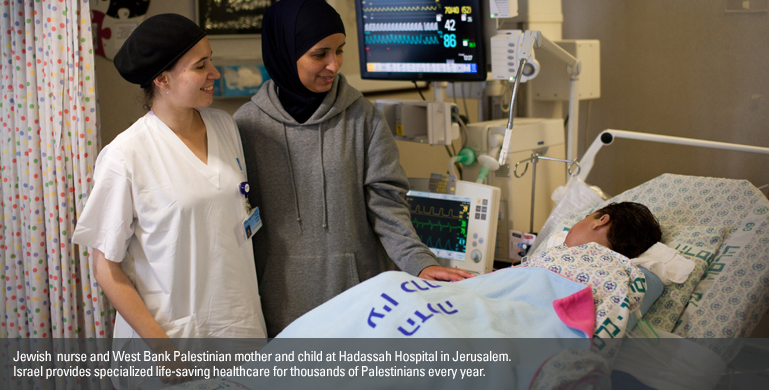 A Black Lives Matter platform accuses Israel of genocide. The assertion is false, it’s racist and it sabotages efforts to achieve justice for African-Americans.

Black Lives Matter (BLM) asserts that Israel is responsible for “genocide taking place against the Palestinian people.” Given the definition of genocide, this accusation is groundless—and because it singles out the Jewish state, it ranks as racist anti-Semitism. Just as bad, this libel drives away BLM supporters who otherwise oppose police racial bias.

“I haven’t seen any presentation of how [genocide] could apply in Israel.”
Sari Bashi, Palestine Director, Human Rights Watch

An Arab man who attempted to stab a police officer at the Damascus Gate in Jerusalem was shot and killed by police. A 17-year-old Palestinian, who infiltrated a Jewish town near Hebron, murdered a sleeping 13-year-old Israeli girl. The murderer was killed by a security team when he attacked them. The fact is, most of the 200 Palestinians killed over the last year by Israeli forces were involved in violent attacks on Israeli civilians, soldiers or police. Their response was not genocide, it was self-defense.

Even in the 2014 Gaza war, which killed about 2,100 Palestinians, only 45% were non-combatants, one of the lowest civilian death ratios in modern warfare—due largely to Israel’s extraordinary efforts to avoid attacking residential areas and warn civilians in advance of bombings.

Indeed, a close look reveals not a shred of evidence that Israel intends or is in fact committing genocide.

What is the definition of genocide? Genocide is one of the most horrific crimes against humanity—and it was exemplified by Adolf Hitler’s plan to exterminate Jews and his killing of some six million of them. These are the two legal elements of genocide: There must be deliberate intention to destroy a national or ethnic group, and there must be a concerted effort to effect that goal, such as the methodical killing of that group’s members or inflicting conditions calculated to bring about the group’s physical destruction. As one quickly sees, neither of these conditions exists in Israel or the disputed territories of Judea and Samaria (“the West Bank”).

Israel has no plan to eliminate Palestinians, nor is it methodically killing them on ethnic grounds. In fact, some two million Palestinians are citizens of Israel and enjoy full democratic rights and one of the highest standards of living in the Middle East. The Palestinian population within Israel and in the disputed territories has doubled since 1990 and continues to grow apace. Even more telling, Israel issues more than 100 visas a day to Palestinians in Gaza to allow them to receive medical care in Israel and treats thousands more Palestinians from the West Bank every year—at low or no cost—in Israeli hospitals. According to Sari Bashi, Palestine country director for Human Rights Watch, “[Genocide] is an attempt to destroy an entire people. I haven’t seen any presentation of how that could apply in Israel.”

Why is it racist to accuse Israel of genocide? Those who condemn Israel falsely—for crimes it does not commit—are attempting to delegitimize the Jewish state. Delegitimization is one of the classic signs of racist anti-Semitism: Those who use this strategy are asserting that of all the world’s nations, only Israel’s attempts to defend itself from sworn enemies are criminal. That’s a double standard—also anti-Semitic. Where is Black Lives Matter’s condemnation of Syria, which has killed hundreds of thousands of its citizens? What about Iran, which hangs LGBTQ people? How about China, which has occupied Tibet for more than 50 years?

In truth, Jews have every right to self-determination in the Middle East. Jews have had an uninterrupted presence in the region for 3,000 years, including their own nation state. For some 2,000 of those years, following their exile from ancient Palestine, the Jewish people have strived to resettle in their Biblical homeland.Finally, in 1948, with United Nations approval, Jewish self-determination was realized as the State of Israel. In short, those who deny Israel’s right to exist—those who delegitimize it with accusations of genocide—are guilty of anti-Semitism.

How does the genocide libel harm Black Lives Matter? Jewish Americans have been among the most stalwart leaders and supporters of the American civil rights movement from the beginning—they were among the founders of the NAACP—and powerful Jewish support for defeating racism continues to this day. Moreover, the State of Israel enjoys strong approval from the overwhelming majority of Americans. When a movement, such as Black Lives Matters, strays from its core purpose into peripheral issues—particularly when it resorts to wildly false accusations— that movement quickly loses broad public support. In short, if Black Lives Matters truly cares about stopping police racial bias, it will marshal all its forces to dramatize disturbing law enforcement practices and gather support for reform—not alienate supporters.

Libels of genocide against Israel are attempts to delegitimize solely the Jewish state among all the world’s nations and are therefore anti-Semitic. What’s more, such racist accusations alienate not only Jewish allies of the Black Lives Matter movement, but also other political progressives who will be repulsed by defamation of Israel.