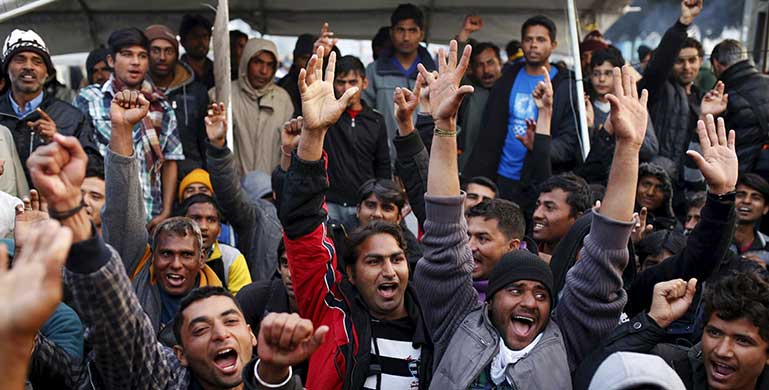 America is a land of immigrants – – – and it’s against our beliefs to ban any group on strictly religious grounds. But it still matters whom we welcome into our society.

No immigrant should be granted entrance to the U.S. who does not embrace bedrock American values.

At least one terrorist responsible for recent Brussels bombings and one of two San Bernardino terrorists were Muslim immigrants. Last New Year’s Eve, hundreds of women in Germany were sexually assaulted by gangs of men identified as immigrants from Muslim lands.

America was founded by immigrants and has grown strong through our “melting pot” of cultures. But for all this diversity, immigrants to the United States have largely respected common American values—democracy, freedom of religion, equality, ­­tolerance, pluralism, and separation of church and state. Today, as millions are threatened by civil strife in the Middle East and Africa, it’s no wonder these beleaguered look to Western nations—especially the U.S.— for safety and a better life. Yet millions from other regions—for their own poignant, pressing, and often life-threatening reasons—also yearn to come to America.

However, because we cannot afford to support unlimited newcomers, we must make difficult decisions about who is allowed to enter our country and vie for precious citizenship. How should we make these decisions? While the U.S. has always extended a hand to refugees, we have never opened the floodgates—we have always had to make judgments on individual cases. Rather, U.S. immigration policies are based on who will contribute most to our society.

How should we respond to Muslim immigrants? Most Americans agree that banning Muslim immigration based solely on religious affiliation is un-American. We don’t accept hateful bias against an entire group. Yet common Muslim beliefs, as revealed by recent Pew Research Center studies, raise concerns about Muslim immigration to the United States. Should we open our doors to individuals whose beliefs conflict harshly with our core values? On what basis shall we evaluate the millions who seek entrance? If we continue to believe America is best served by immigrants who will help us thrive, we should also rule out those who will endanger our society—by their values and potential actions. Quite simply, a vast majority of Muslims harbor values antithetical to the liberal democratic principles we cherish. In short, no immigrant should be granted entrance to the U.S. who does not embrace bedrock American values. Rule of Civil Law over Sharia. According to research by the Pew Research Center, “overwhelming percentages of Muslims in many countries want Islamic law (sharia) to be the official law of the land.” Under religious sharia, any man- made law (such as American democracy) is illicit; adultery is punishable by stoning to death; apostates who leave Islam are to be killed. Some 99% of Afghans support sharia as the national law, as do 91% of Iraqis and 74% of Muslims in the Middle East and North Africa. Will immigrants with these beliefs help our society? Or should U.S. immigration be limited to those who disavow sharia as civil law?

Equal Rights for Women. Some 93% of Muslims in Southeast Asia and 87% of those in the Middle East and North Africa believe a wife must obey her husband. No wonder cases of spousal abuse, including rape, abound in Muslim countries, to say nothing of honor killings of wives and daughters who “scandalize” male relatives when they are victims of rape. Such values conflict widely with American norms. Is belief in patriarchal domination of women helpful to American society, or should immigrants with this belief be turned away?

Opposition to Suicide Bombings. Fully 40% of Palestinian Muslims, 39% of Afghans and 29% of Egyptians believe suicide bombings in defense of Islam are often or sometimes justified. Should the United States accept an immigrant who holds these beliefs—as apparently have the Brussels, Paris, San Bernardino and Jerusalem killers? Or should we screen for this belief and deny entrance to those who hold suicide bombing to be acceptable?

Separation of Church and State. The exclusion of religion and religious leaders from the mechanics of government is a rock upon which American democracy rests. Yet some 79% of Muslims in Southeast Asia and 65% in the Middle East and North Africa believe religious leaders should wield political influence. After seeing the effect of theocracy in Iran and the disaster of Muslim Brotherhood rule in Egypt, is it wise to welcome immigrants who don’t support separation of religion and government?

Muslim immigrants whose religious beliefs run directly counter to fundamental American political and social values can pose both a moral and a security threat to our society. For this reason, potential immigrants should be screened to prevent entrance by those presenting such a clear danger.