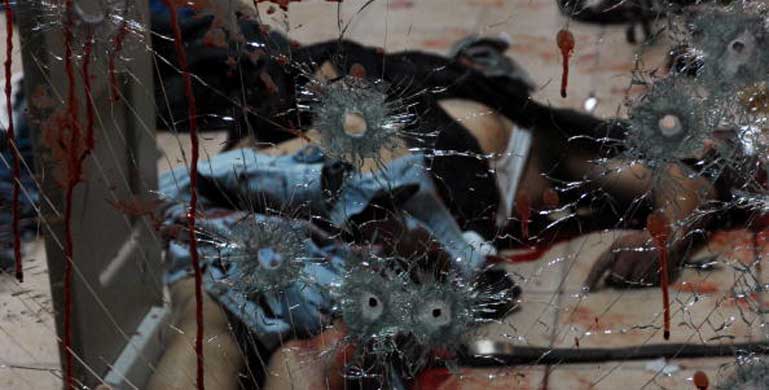 Recent terror sprees in Paris and Jerusalem were both wrought by radical Islamists – – – part of a global jihad seeking to conquer the world and kill infidels.

ISIS terror acts in France—and now San Bernardino—are motivated by the same Islamist obsession that inspired the 9/11 bombings in the U.S., as well as deadly knife, gun and car attacks in Jerusalem and throughout Israel—a fanatical conviction that Christians, Jews and moderate Muslims must be driven out of “Muslim lands.”

ISIS, the latest, most brutal and militarily successful Islamist terror group, grew as an offshoot of al Qaeda, responsible for 9/11 and recent terror attacks in Mali. This year, ISIS has murdered more than a thousand innocent people in France, Egypt, Lebanon, Libya and Turkey, in addition to thousands of Christians, Yazidis and Shiite Muslims killed in its conquest of broad swaths of Syria and Iraq. ISIS’s avowed goal is to create an Islamic caliphate—empire—consisting of land it perceives to belong to Islam, including most of the Middle East, North Africa and Spain. ISIS’s bloody conquest has been virtually unimpeded by Syrian and Iraqi armies and, until recently, almost ignored by Western nations, despite the group’s downing of a Russian airliner and warnings to the U.S. that “we will drown you in blood.”  Indeed, U.S. intelligence affirms that ISIS’s long-term goal is to attack America.

Likewise, Hamas and other Palestinian jihadists have killed hundreds of innocent Jews in Israel in suicide bombings and missile attacks with a similar objective—to conquer Palestine and expel non-Muslims. Indeed, since Hamas violently seized control of Gaza in 2007, it has ruled with an iron Islamist hand, imposing strict sharia religious law and driving Christian Arabs out by the thousands. Hamas’s charter states its goal is to conquer the entire Holy Land and kill all its Jews. The Palestinians’ latest “knife intifada,” which has already killed 20 innocent people and injured more than 350, underscores this commitment. No surprise that recent polls confirm an overwhelming majority of Palestinians—over 80%—agree that all of Palestine belongs to them and there can be no Jewish state.

How Should the World Respond?

While no Western nation seeks another war in the Middle East or Africa, the pattern and frequency of recent terror attacks compel us finally to unite in a concerted campaign to defeat this barbarity. In order to end the escalating slaughter of innocents, we must adopt a three-pronged strategy:

1) Identify the enemy. If we deny that these acts of imperial, terrorist aggression are perpetrated by self-avowed Muslims—as some notable politicians still do—we will surely fail to understand or defeat them. French President Francois Hollande took the first step when, just following the Paris massacres, he said, “We are at war with jihadi terrorism.” While this is correct, France has conspicuously not stepped forward to condemn identical attacks against innocent civilians in Israel. This misunderstands the global jihad that plagues us, and it misses the opportunity to form solidarity with the world’s nations most effective at fighting radical Islam, of which Israel is preeminent.

2) Take the battle to the enemy. Likewise, the United States, the world’s most powerful military force, has been a reluctant player in fighting ISIS. For example, the U.S. currently flies on average just seven sorties a day against the Syria-based terror group, compared with the 1,100 daily sorties we flew against Saddam Hussein in the first Iraq war. The U.S. and other nations have proven equally passive in condemning a steady drumbeat of Hamas terror missiles and other Palestinian terror attacks mounted against Israelis. In fact, if we are to defeat Islamist terrorism, we must vigorously oppose all forms of it. Most critically, military experts agree that enemies like ISIS and Hamas must be engaged forcefully not just by air—but on the ground—in order to defeat them.

3) Enjoin moderate Muslims to fight the enemy. Finally, while Western diplomats speak eloquently of “moderate Islam,” the world has seen precious little assistance—either symbolic or material—from Muslim leaders who oppose radical Islam. While there are Christian and Jewish organizations dedicated to opposing Islamic extremism, for example, Muslim leaders are nearly always silent in the face of Muslim terror attacks on Israel and elsewhere. While several French Muslim community leaders condemned the Paris assaults, U.S. Muslim groups are generally inert, as are leaders of major Muslim countries like Indonesia, Malaysia and Pakistan. In order to defeat extremism among any group, the leaders of that group must not only disapprove, but they must actively fight it in word and deed.

It’s time for countries endangered by the global Islamist jihad to join in solidarity to defeat this cruel and bloody scourge. We must condemn Islamist terror in all its forms, we must confront this enemy on the ground, and we must challenge Muslim leaders to help us in this battle. Only in this way can we prevent horrors such as those we suffered in Paris and Jerusalem.