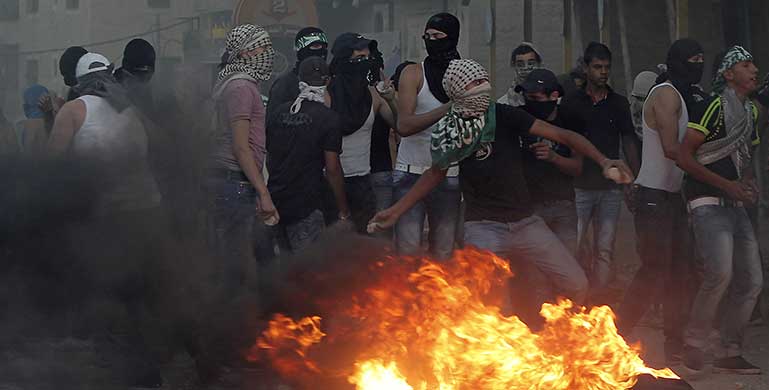 If incitement does not stop, Congress should reduce the $500 million in aid we currently spend to prop up the Palestinian Authority.

A teenage girl on an official Palestinian Authority TV show proudly recites a poem with the lines “Oh sons of Zion, oh most evil among creatures/Oh barbaric monkeys, wretched pigs.” The program host cries “Bravo!” and applauds. A young girl on Palestinian TV explains she wants to be a policeman when she grows up “so that I can shoot Jews.”

In fact, Arab Palestinian culture is saturated with anti-Semitic incitement, starting from the first grades of school, in daily news media, political speeches and most insidiously the mosques of Gaza and the West Bank. (Imagine our outrage if the U.S. President declared that an ethnic group had filthy feet and would contaminate a place of worship.) The core issue at the heart of Palestinian hate for Jews is an obsessive belief that Jews are non-believers who have zero rights in Muslim Palestine—this despite inarguable scientific proof of the Jews’ 3,000-year continuous history in the Holy Land, preceding Muslims’ arrival by 1,600 years.

The most recent incitement has been the fantastical claim by Palestinian authorities that Israel is planning to tear down al-Aksa mosque—for which there is no evidence and which Israel has steadfastly denied. In addition, Palestinians are now insisting that Jews, Christians and other “non-believers” no longer be permitted to visit the Temple Mount—despite the allowance of such multi-sectarian visits since Israel liberated the site from Jordan in 1967.

No surprise that a rash of anti-Semitic terrorist violence is currently roiling Israel. One Jewish man was killed on Rosh Hashanah when Palestinian youths bombarded his car with large stones, forcing him to crash. Another 30ish couple was shot in their car as their four children watched from the back seat. Two Orthodox Jews were killed in Jerusalem’s Old City when a Palestinian teenager stabbed them to death. Dozens more rock, firebomb, stabbing, shooting and car attacks on innocent Israelis have occurred in recent weeks.

What’s worse, perpetrators of such murderous hate crimes are celebrated as heroes by Palestinian leaders and the Arab street. Indeed, instead of condemning the Jerusalem killings, the Palestinian Authority (PA) “saluted” the murderers and denounced Israeli police for shooting them. No wonder terrorist Dalal Mughrabi, who hijacked and blew up an Israeli bus, killing 38 Israeli civilians, has had Palestinian schools, summer camps and a town square named after her. Likewise, the Hamas terror organization in Gaza glorified as “heroic” the execution of three innocent Israeli teenagers last year.

Collapse of the PA and Chances for Peace. The Palestinian Authority is in shambles—on the edge of bankruptcy, in a mortal struggle with archrival Hamas and staggering under the leadership of 80-year-old Mahmoud Abbas, now in his twelfth year of a four-year term, with no successor in sight. Abbas refuses to return to peace talks, though Israeli Prime Minister Netanyahu invites such negotiations with no preconditions. Truth told, since recent polls show the majority of Palestinians believe their mission is to conquer all of Israel, it is unlikely the Arab street would accept any peace deal based on a two-state solution. Meanwhile, Hamas continues to gain strength in the West Bank and is likely to seize power on Abbas’ departure, putting radical Islamists in control of the entire Palestinian enterprise.

What Can Israel Do, What Can the U.S. Do? Israel continues to show restraint in managing terror attacks throughout Israel and on the Temple Mount. But clearly, in the face of the current wave of murders and other hate-motivated violence against civilians, Israel has no choice but to keep the peace—increasing police presence in violent hot spots and levying stiffer penalties for perpetrators (and their parents, since many offenders are juveniles).

The U.S., for its part, can pressure Mr. Abbas and the Palestinian Authority diplomatically to cease its lying about the Temple Mount, anti-Semitic slanders and other incitements to violence. In addition, if such incitement does not stop immediately, the U.S. Congress should take steps to reduce the $500 million in aid we currently spend to prop up the Palestinian Authority, millions of which provides “salaries” to convicted Palestinian terrorists in Israeli jails.

The Palestinian Authority’s inflammatory anti-Israel rhetoric has led to a wave of terrorism that threatens to devolve into a third intifada.  Although President Abbas claims he wants peace, his words and actions prove he wants to provoke another explosion of violence to win international sympathy and bring pressure on Israel. Israel must deal firmly with these violent outbreaks, and the U.S. must indicate to Abbas and the PA that it will not fund lies, racism and terror.