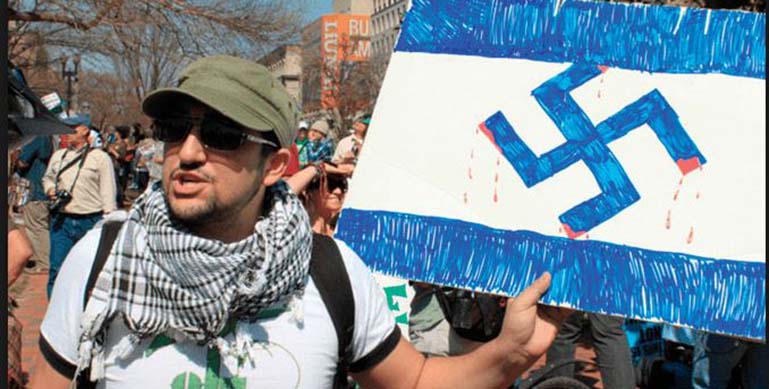 Academic boycotts of Israel advocated by BDS supporters not only strangle the free expression of ideas, they also deny the self-determination of the Jewish people.

Boycott, Divestment and Sanctions-sponsored boycotts of Israeli academic institutions tarnish the integrity of any school that stands for academic freedom—the open-minded, tolerant exchange of ideas. Worse, BDS couches its lies and half-truths about Israel in human rights rhetoric meant to delegitimize the Jewish state.

Academic freedom is a noble, spirited ideal at the heart of American higher education. Academic freedom thrives on a wide-ranging, respectful exchange of ideas in search of truth—even among people who passionately disagree. As such, it depends on unfettered communications that span national, linguistic and ideological borders. Conversely, anyone who attempts to limit the access of the academic community to ideas, research or scholars, no matter their origin or beliefs, is guilty of trampling this precious privilege.

Indeed, the strategies and tactics of BDS movement have just such a subversive effect on academic freedom. BDS supporters attempt to censor speakers with whom they disagree, support their arguments with outright falsehoods, and seek to blacklist innocent people from Israeli academies because of their nationality. Finally, most egregiously, BDS uses a double standard to single out Israel, among all nations, for recrimination, which is, using the definition adopted by the U.S. State Department, anti-Semitic.

Does academic freedom support disrupting speakers we don’t like? BDS advocates have shouted down speeches by the Prime Minister of Israel Ehud Olmert, Israeli Ambassador to the U.S. Michael Oren, Harvard Professor Alan Dershowitz and they routinely disrupt fellow students at Holocaust Memorial and other pro-Israel events on campus. Yet preventing speakers from delivering their messages not only violates the tolerant, respectful spirit of academic freedom, it also violates our core First Amendment guarantees of free speech.

Does academic freedom support telling lies or half-truths to argue our point? Under the guise of human rights rhetoric calling for “liberation” of the Palestinian people and an end to Israeli “occupation,” BDS proponents recite a litany of alleged Israeli crimes. Perhaps most outrageously, they accuse the Jewish state of apartheid—an outright lie that bears absolutely no relationship to the full democratic rights of Israel’s Arab citizens or even to Palestinians living in the West Bank or Gaza. Likewise, to accuse Israel of “occupation” without mentioning that Israel has been the Jewish homeland for some 3,000 years or the suicide bombers and nearly daily rocket attacks meant to destroy the Jewish state is intellectually dishonest. While free speech allows anyone to lie, outright mendacity is hardly a cornerstone of academic freedom.

Does academic freedom support severing our schools from international research and scholarly thought? BDS advocates an academic boycott of Israeli universities and, effectively, of the scholars who teach and conduct groundbreaking research there. By boycotting Israeli students and teachers, we deprive our own institutions of the kind of open collaboration that is key to academic freedom. To punish Israeli academics with pariah status simply because of their nationality, regardless of their politics, is unconscionable.

The double-standard, demonization and delegitimization BDS uses against Israel is anti-Semitic. BDS advocates are quick to assert that “I’m not anti-Semitic, I’m just anti-Zionist.” While academic freedom allows everyone to criticize Israel, just as one is free to criticize Iran, North Korea, Saudi Arabia or the United States. But BDS does not simply criticize Israel—rather, it demonizes it, calling it a Nazi regime. It attempts to delegitimize Israel by claiming it is occupying Arab territory, thus denying the right of the Jewish people to self-determination in their homeland. As Martin Luther King, Jr. has noted, “When people criticize Zionists, they mean Jews. You’re talking anti-Semitism.” Indeed to single out Israel among all nations for a boycott is a blatant double-standard . . . and that is by definition anti-Semitism.

If you support a robust atmosphere of academic freedom, in which all sides are heard and positions are vigorously and respectfully debated, you must oppose BDS’s call for an academic and cultural boycott of Israel. In fact, BDS actions flatly contradict academic freedom, and its insistence on denying the self-determination of the Jewish people in Israel is overtly anti-Semitic.