FLAME
X
Put text, tables or any other HTML contents here, as you would put in any other HTML page. ..... and more.
Skip to content
Home » Despite vicious attacks on Israel by the media, the U.N. and Islamists, we continue to win!
Abbas Flounders at the UN: Last Gasp for Palestinian Statehood?Jacques Gautreaux2020-02-24T12:33:47-07:00 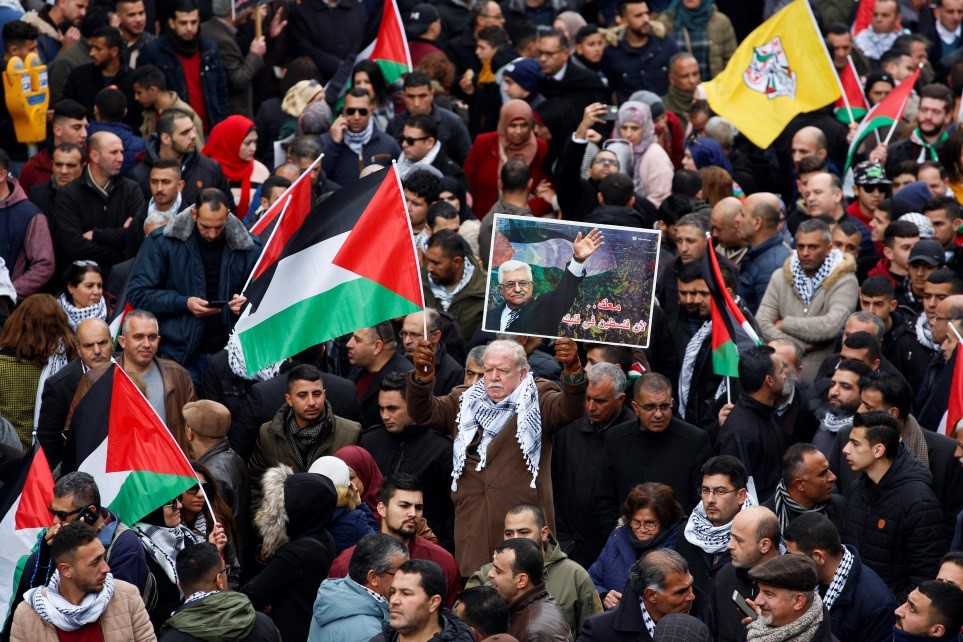 Palestinians in Ramallah demonstrate against the U.S. peace plan prior to Mahmoud Abbas’ speech at the U.N. in mid-February. Abbas called the plan, which promised Palestinian statehood and $50 billion in development funds, “illegal”—another among many missed opportunities over the decades to achieve sovereignty.

Despite his lack of meaningful achievement as President of the Palestinian Authority, Mahmoud Abbas has been a formidable, pugnacious opponent of Israel over the last 15 years of his four-year elected term.

However, Abbas’ appearance at the U.N. earlier this month marked a desperate, sad—even pathetic—low mark in the 57-year Palestinian Arab movement for sovereignty.

His message confirmed that further expenditure of U.S. diplomatic capital to rescue the Palestinians currently is misplaced. It surely seems time for the octogenarian leader to step down.

Abbas’ speech to U.N. delegates was impassioned, but effete. He also failed in his attempt to promote a Security Council resolution decrying President Trump’s Peace Deal—which calls for a sovereign Palestinian state—as illegal.

First, Abbas attacked the Trump plan, accusing members of the U.S. administration of duping the President: “I don’t know who is giving Trump such horrid advice. Trump is not like this. Trump that I know is not like this.”

Such analysis sounds hopelessly naïve, considering that the Trump plan is entirely consistent with a President who has already moved the U.S. Embassy to Jerusalem, recognized Israeli sovereignty over the Golan Heights, declared settlements in Judea-Samaria legal, and cut hundreds of millions of dollars in support to the Palestinian Arabs. Indeed, the idea that Abbas, of all people, could truly “know” the unknowable Trump seems absurd.

Abbas also displayed a series of five fake maps allegedly showing how “Palestinian” territory has been eaten up by the U.S.- and U.N.-supported Israeli juggernaut since 1917.

While the Palestinians have certainly lost virtually all leverage in their bid for statehood—and the potential of their future territory is indeed shrinking—the problem has not been encroachment on sovereign or even promised Palestinian territory.

The reality is, the Palestinian Arabs have never managed to assert sovereignty over a square inch of Palestine—not in 1917, before they called themselves Palestinians; not in 1948 when the Arabs unanimously refused the U.N. proposal to partition the Holy Land into Arab (not Palestinian) and Jewish states; and at no time in the last 72 years since Israel’s declaration of independence.

It’s useful to remember: Had the Arabs accepted the U.N. partition in 1948, the Palestinians, too, could have been celebrating 72 years of independence.

Palestinian Arabs have squandered many opportunities for statehood ever since—refusing Israel’s generous offers of a state with a capital in Jerusalem in 2000, 2001 and 2008 . . . and now spurning Trump’s highly realistic and possibly final U.S. offer, just a few months ago.

In addition to Abbas’ U.N. diatribe against the Trump plan (though not his friend Trump), the Palestinian leader also made declarations of warm acceptance of the Jewish people and his willingness to negotiate for peace immediately.

Of course, it was Abbas just a few years ago who warned Jews (spit, spit) not to “contaminate” holy Muslim ground by entering the Temple Mount, the most sacred of Jewish sites. He also declined in the U.N. speech to voice simple acceptance of the Jewish state, the easiest, most basic requirement for entering peace talks.

In short, Abbas’ appearance at the U.N. only underscored the moribund condition of the Palestinian Arab movement for statehood. His tired complaints, his familiar lies, his empty promises—together communicated a sad desperation, exhaustion and hopelessness.

Until the Palestinians move beyond the Arafat-Abbas era—replacing this failed old guard with new blood who are sincerely and courageously committed to peace and prosperity for the Palestinian people, rather than conquest of Israel—there seems no sense in the U.S. (or any other body) investing time, money or opportunity by conjuring up futile offers of money and diplomatic assistance.

I urge you, in conversations with friends, family and colleagues, to clarify that the Palestinians have wasted every chance to form a state, and with that, over the decades, allowed the size of their potential territory to diminish—a trend likely to continue. Indeed, the best course for the Palestinians today would be to seize upon the Trump plan and make the most of it.